Coaching U.S. Senators on coming out 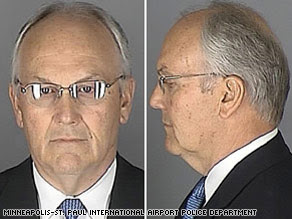 The news media are in a frenzy over Craig's arrest for allegedly soliciting gay sex in a public restroom. Craig announced yesterday that he regretted making a guilty plea to a lesser charge and keeping the incident secret from his family, friends and staff.

I’m trying to do my part by offering to send a free copy of my book Hide and Speak: A Coming Out Guide” to any U.S. Senator, including scandal-plagued Larry Craig.

In my opinion, Jesus had the best coming-out advice of all: “The truth will set you free.”

Sometimes telling the truth is difficult, but living a lie is even harder. Senator Craig is just the latest example of an anti-gay leader caught in a web of lies about a secret gay life.

Former U.S. congressman Mike Foley and evangelical leader Rev. Ted Haggard officially opposed gay rights until recent gay sex scandals ended their public careers. They all might have prevented their scandals by following my book’s powerful program of self-acceptance and appropriate disclosure. The coming-out guide gives practical help with the coming-out process for gay, lesbian, bisexual and transgender (GLBT) people -- and anyone else with a story to tell.

Each chapter of Hide and Speak includes real life examples and tested, highly effective exercises that I used in coming-out workshops nationwide. The book tells positive ways to come out to oneself, create a circle of supporters and deal with family, job and school. Readers learn how to live proud, free and balanced, no matter what happens.

If you know any Senators who would like a free copy of Hide and Speak, please send them my way!

Posted by Kittredge Cherry at 11:20 PM

Great stuff! I wonder how many (if any) of our congresspeople will take you up on the offer...keep us informed!

BTW, could you give a reference for the gnostic gospel quote? I'd love to read more.

After I posted my original piece, Alan Colmes of Fox News radio contacted me to do a live interview broadcast coast-to-coast. It went well -- especially when a fundamentalist caller had to admit that Jesus never said anything against homosexuality.

Many heterosexual friends asked me to try to explain why a closeted gay man would vote against gay rights. I think that closeted gays tend to over-compensate by taking strongly anti-gay stands… hoping to throw all suspicions away from them. It also seems to be an expression of the internalized self-hatred that compels them to hide their sexual orientation out of guilt and shame.

Republicans have a double-standard — gay allegations cause a crisis, while other misbehavior and crimes are excused.

By the way, the 2008 Republican National Convention will be held in Minneapolis! Republican delegates who travel by plane will be walking past the now-notorious men’s room!