Christ Mother by Janet McKenzie © 2002
Artist Janet McKenzie is world-famous for her sacred art, but her most daring female Christ has rarely been seen until now.

McKenzie’s controversial Christ Mother painting is included in my new book Art That Dares: Gay Jesus, Woman Christ, and More. The book contains color images by 11 contemporary artists from the U.S. and Europe.

McKenzie is best known for painting the androgynous black Jesus of the People, which appears on the cover of Art That Dares. The famous painting was chosen by Sister Wendy of PBS to represent Christ in a contest sponsored by the National Catholic Reporter. The resulting controversy brought bomb threats and hate mail to McKenzie’s secluded Vermont studio.

Undaunted, McKenzie followed up with an even more challenging work—a nude female Christ that has largely been censored by the gatekeepers who decide what gets exhibited. Called Christ Mother, it is a towering, gritty, and majestic painting of a naked woman bound in a crucifixion pose.

“Sometimes ‘controversial’ art simply comes forward, like it or not. It is like a scream; you are doing it before you realize you are,” McKenzie recalls in Art That Dares.

In the book, McKenzie describes the opposition to Christ Mother and explains why she painted a female Christ. “She is the feminine aspect of Jesus, mother to us all, and to my mind, she is undeniable,” McKenzie says. “Christ Mother is in the act of being crucified, yet she stands with strength, in acceptance, although bound. Her body glows with life but also reflects the coming hereafter.”

I interviewed McKenzie from afar for Art That Dares, but I didn’t get to meet her in person until we both converged on Taos recently for the National Festival of Progressive Spiritual Art, where McKenzie was one of the top-selling artists.

I was touched by McKenzie’s sincere joy at seeing me with my mother in Taos. A highlight of our time together was when she took a photo of me with my mom. McKenzie is known for paying homage to the female figure, a commitment that she attributes to the loss of her mother and grandmother at an early point in her life.

I believe that re-envisioning Christ is one of the most important tasks of our time. The new images are much needed now because Christian rhetoric is used to justify discrimination against women and lesbian, gay, bisexual, and transgender (lgbt) people.

In Art That Dares, the book’s 11 artists all tell the stories behind their controversial images, including censorship, violence, death threats and vandalism that destroyed their work. A lively introduction puts the art into political and historical context, exploring issues of blasphemy and artistic freedom. 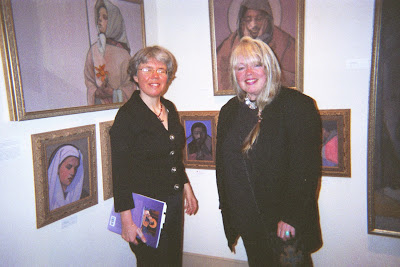 Posted by Kittredge Cherry at 12:51 PM