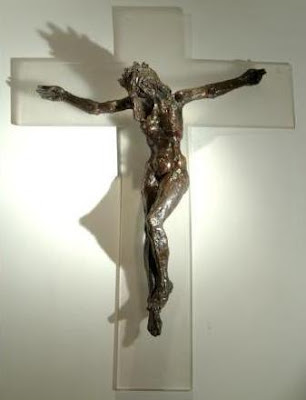 “Christa” by © Edwina Sandys
Christa, the female Christ, is the theme of the following address by Nicola Slee, a feminist theologian and poet based at the Queen’s Foundation in Birmingham, England. She is the author of the new book “Seeking the Risen Christa

___
If you are anything like me, you will be conscious of an ambivalence about Good Friday. I can’t imagine being anywhere other than in church, yet I wonder what I’m doing here, fixing my attention and prayer on the horrible death of a man two thousand years ago. I’m both drawn to the cross yet repelled by it Somehow we are here, however we’ve got here and whoever we are, gathered around the cross, with all its strange fascination and its horror – with some kind of a sense that it is important to be here, that we need to be here, that we are doing something that is significant, even essential.

Yet we do well to proceed with care as we approach the cross, to bring what theologians call a hermeneutics of suspicion to bear on this place of violent death where Christians claim we see the love of God most powerfully at work. The cross can be, and has been used, as a tool of oppression to justify violence, bloodshed and abuse. The suffering of Jesus, the innocent, has been preached as a means of encouraging those who suffer to accept their burdens meekly, without complaint, as Jesus did – even when that suffering is unjust and cries out to heaven for restitution. Mary Daly, that arch feminist whose death this year marks a milestone in feminist theology, described Christianity as necrophiliac, death-fixated, addicted to violence. Mary Grey, a more moderate critic, ponders: ‘as Christianity has now had two thousand years of death symbolism, it is at least possible that the slaughter perpetrated in the name of Christendom is related to its symbols of death, blood-guilt and sacrifice’.  A number of feminist theologians argue that the cross should be displaced from the centre of Christianity and an entirely new (or perhaps old) religion of natality (birthing) and flourishing replace the death-fixation of patriarchal religion.

It is important to take such critiques seriously, and I for one have found such work both challenging and liberating, helping me to recognise ways in which I have succumbed to an unhealthy valorization of suffering in my own life – and, perhaps more importantly, helping me to see the ways in which the church uses the symbolism of the cross to shore up its own patriarchal power and to keep abusive systems in place.

So I can go a long way with those who want to deconstruct and decentre the cross. A long way, but not the whole way, because even if we try to remove all references to suffering, violence and death from our faith, these are daily realities for many in our world and can’t be easily airbrushed out. It’s not so much that we need to remove the cross from the centre of Christianity as find better ways of understanding it. And this is possible because the cross is capable of multiple readings and re-interpretations. As Elisabeth Moltmann-Wendell has said, ‘In the last analysis, the cross is a paradoxical symbol. It is not simply the guillotine or the gallows. It is also subconsciously the symbol of wholeness and life and it probably could only survive as a central Christian symbol because of this simultaneous subconscious meaning.’

In these addresses, then, I want to consider some different ways of ‘reading’ the cross, some different angles or perspectives on the cross, particularly some that have been developed by feminist and womanist theologians – some that don’t often find their way into churches, particularly on Good Friday, though if they do, it’s places like St James where I’d expect that to be happening – and I’m grateful for places like this, rare as they are, where it is possible to bring our critique, our ambivalence and our efforts to find new theologies.

One of the ‘fresh readings’ of the cross feminists offer us is the image or symbol of the female Christ, the so-called ‘Christa’. I say ‘fresh’, though in fact, it’s almost forty years old in its recent manifestation, and has roots that go way back into the ancient mystical tradition of Christianity. You have a few examples of artists’ depictions of a female Christ on your service sheet, although these represent just the tip of the iceberg, as there are literally dozens of such images to be found once one starts searching (and that in itself tells us something about the need for images of a feminine divine in a religion which has suppressed the feminine).

When presenting such images to Christians who have never seen them before, I can expect reactions of shock, confusion, even horror – though I imagine that at least some of you at St James will be familiar with such images and, even if you are not, will have a more sympathetic reaction. The Christa is not in any way a denial of the historical reality of Jesus’ masculinity, it is not an attempt to rewrite history and pretend that Jesus might have been a woman. Such images are trying to do something more profound. They are making a positive and visceral identification between the bodies and sufferings of women and the body and suffering of God. In doing so, they have the power to shock us into recognizing just how patriarchal and male our assumptions about God and Christ still are – and in that sense, as Marcella Althaus-Reid puts it, such images ‘undress’ or reveal, our own blasphemous idols of God. She speaks about the ‘obscene Christ’ – a black, or female, or lesbian or transgendered image of Christ – not that such a notion in itself is obscene, but it reveals to us our own obscenity when we recognize that we had assumed Christ to be white, male, heterosexual or whatever.

Nevertheless, the female Christ figure is, itself, controversial amongst feminist theologians. Some consider it merely reinforces, rather than challenges, the stereotype of women as powerless victims of abuse. Others find it immensely healing, enabling them to realize their own bodies as the site of the divine, even in their mortality, pain and abuse. I leave you to make your own response, as I share with you something of my own, in a poem I have written exploring the identity of the crucified Christa with us today:

Who is the Christa?

Every street girl and boy scavenging on rubbish tips
Every child working in sweatshops making cheap tee-shirts for Primark
All the women raped in war or, worse, forced to watch their daughters raped
Husbands shot in front of their eyes

Christa, our sister,
have mercy
Christa, God’s beloved,
show us your face
where we have not wanted to see it
where we resist your presence among us

___
The above reflection by Nicola Slee is the first of three addresses on Christa that she delivered on Good Friday in 2010 at St. James Piccadilly Church in London. Her other addresses look at the Corporate Christa and the Cosmic Christa. Click here for the full text of all three addresses.

We usually focus on LGBT spirituality here at the Jesus in Love Blog, but the idea of Christ being female seems queer in the best sense of the word. We are also focusing on the woman Christ now in order to help balance the many gay male Christ figures that will appear here soon in a new series for Lent/Easter.

The illustration for this post is “Christa” by Edwina Sandys -- the most famous artwork of a female Christ. Sculpted in 1975, the magnificent bronze crucifix has graced the pages of the London Times, Time, Newsweek, Life, and other major publications. It has appeared at respected galleries and churches throughout Europe and North America, notably a controversial 1984 showing at the Episcopal Cathedral of St. John the Divine in New York City. Wherever Christa goes, the sculpture triggers debate about the nature of God and the role of women. Sandy’s “Christa” sculpture and the story behind it are included in “Art That Dares: Gay Jesus, Woman Christ, and More

Posted by Kittredge Cherry at 9:45 AM

Another superlative post. Again, I can't help saying that the way in which the "At the Cross" took us past the crucifixion and added depth and reality to the encounter of Jesus and Mary Magdalene on Sunday morning provides the essential balance. I thoroughly agree that overemphasizing the Cross in all its gory violence has done tremendous harm to the understanding of the presence of the Holy Spirit resulting from Christ's willingness to "do it God's way".

Much of this is what Cynthia Bourgeault is working on in her incredible study of Mary Magdalene as well. I hope she will soon read your books, and that the two of you will be able to "connect" on some of those ideas.

Knowing of your passion for women’s spirituality, I hoped that you would enjoy this post, Trudie. I especially like Nicola Slee’s approach because she emphasizes the RISEN Christa, not just the crucified Christa. I’m looking forward to her new book “Seeking the Risen Christa.”

I like the emphasis on the risen christa too. Mainly because women in divine form need to be celebrated. I do think Mary Daly's characterization of christianity as about necrofilia does have its validity. Anything that male dominated for that long is going to build up some pretty sick baggage.
Love the post from the Queen's professor... very well put. The Brits have all the luck :-)

I'm not sure where you can order Christa. I suggest that you try searching Google.