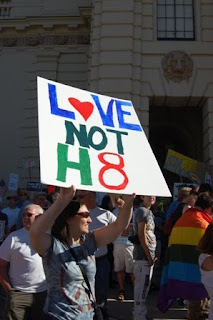 The judge ruled that the Proposition 8 ban on same-sex marriage was unconstitutional. This is a big victory for justice, and for lesbian and gay couples. Thank God!

This is hot news that just happened around 2 p.m. Wednesday (Aug. 4).  I wanted to let you know right away.

Two key sentences from the ruling by Judge Vaughn Walker: “California has no interest in differentiating between same-sex and opposite-sex unions. The evidence shows conclusively that moral and religious views form the only basis for a belief that same-sex couples are different from opposite-sex couples.”

He concluded, “Proposition 8 fails to advance any rational basis in singling out gay men and lesbians for denial of a marriage license. Indeed the evidence shows Proposition 8 does nothing more than enshrine in the California constitution the notion that opposite sex couples are superior to same sex couples.”

Here is a link to a news report from the Advocate

You can read the full text of the ruling by clicking this link to HuffingtonPost.com. According to commentator Rachel Maddow, “it’s better than whatever novel you are currently reading right now.”

Enjoy a video of the victory speech by Prop 8 plaintiff Chad Griffin. He’s the “mastermind of the federal lawsuit against Proposition 8,” according to the Advocate. Click here to see it.

Posted by Kittredge Cherry at 1:56 PM

This is great news for me, Kitt - and I', not even American, let alone Californian. Even better is that although I was waiting and looking for an announcement, it was my (very straight) daughter who found the mews first. She's thrilled, too.

You guys by now must be over the moon! Have a great night.

Meanwhile, waiting up for news and interpretation has taken me way past bed time G'night.

Yes, Terry, we're celebrating here in California today! Thanks for sharing the joy.

I just posted new links to news reports and a victory speech video.

Did you catch Rachel Maddow tonight, reading actual parts of the decision? Wow. Just wow. 80 "findings of fact" *all* just undoing the case made by the anti marriage people. Called sexual orientation, "an immutable human characteristic," or words to that effect. IIRC, appellate courts don't have alot of latitude as far as reversing findings of fact. This is pretty darn huge.

Yeah CJ, I saw Rachel Maddow really light up like a christmas tree the other night. She's so great. Anderson Cooper and Rachel Maddow were on fire... nice having gays and lesbians reading the news to us! Got to see the dour faces of Gergen, Mathews etc. viva la differance!

Yes, I made a point of watching Rachel Maddow report the decision to overturn Prop 8. She was glowing and as far as I saw she did the most comprehensive, detailed reporting on the decision. I like thinking of how all our eyes were on Rachel -- CJ, Turtle Woman and me.

I just updated this post with a couple of choice quotes from the judge’s decision.

Just heard the news about the stay on civil marriages being -sort of!- lifted, and of course the first thing I thought of was the next step - which is the opponents going to the ninth circuit and to try to get it put back. And as sort of reflexively ran over in my head what their arguments would be as to why it impinges on *them* and *their lives* to have gay marriage allowed, I all of the sudden got it: of course, *this* is why it impinges on them- "social death." It's what they've been saying right along, when you think about it.

"If you do this, we're going to have to quit treating them as socially dead. And HOW DARE you make us DO that. We're entitled to our religion, dammit. We're entitled to believe in something that requires, -even DEMANDS- that we dream genocidal dreams. We *have* to imagine a future where people not like us have disappeared, where sin is no more and the earth is once again pure. And how can we ever *do* that if we don't get to treat these eventually-to-be-disappeared sinners as the socially dead things they need to be first?"

I love the way you’re integrating the ideas from two separate blog posts, CJ! Your insight is astute.

The TV coverage showed a sign that got me thinking: “When do I get to vote on YOUR marriage?” When you reverse it like that, it shows how truly outrageous it is for people to get to vote on the validity of particular marriages.

Thanks C.J. for tying it all together. The "social death" aspect of the genocide research was shocking when I first read it.
Even I was unaware that it fit in with the UN definition of genocide!
Scary!!!

The straight world has attempted to erase us for a long time, and I still experience this in daily life. Straight people almost NEVER ask me questions about my personal life, even when I am completely out.
Not once did a straight person congratulate me on Judge Walker's original decision a week ago.
This social death and neglect is what makes being lesbian really hard I think.
So gay and lesbian marriage completely negates this possibility in many ways. Then our relationships are a matter of law, and we are recognized in this way.
They have wanted us back in that closet for a long time now, they have wanted to destroy our relationships and put us through ex-gay "therapy." They try to kill us sofetly socially every day in every way.
But this ruling makes that harder to do.
Thanks again C.J.-- like Sappho, you're a right on womon! :-)