It Gets Better: Message to LGBT Youth

“It gets better” is the theme of my new video message to LGBT youth.

I made the video as part of the It Gets Better Project, a new website where LGBT adults can share stories of hope with LGBT youth. Straight allies -- including President Obama -- also make messages of support there.

The project was founded in September by gay author Dan Savage in response to the recent suicides by gay teenagers who were harassed for their sexual orientation. It grew quickly, reaching 1,000 videos, 100,000 supporters and 10 million video views.

In my video I recall how mean boys yelled “lezzie” at me in school when I was growing up in Iowa. But even worse than the bullying was the loneliness. But life got better. I grew up and I’m still together with the wonderful woman who was my college sweetheart. We came out as lesbians to our families and on the job, and the world didn’t end. In fact, it got better! For me it also got better because I realized that there is a God, and God loves me just as I am. I became an openly lesbian minister and author.

Many GLBT youths can’t picture what their lives might be like as openly queer adults. The “It Gets Better” videos allow them to see with their own eyes that they can have a future with love and happiness.

I also signed the “It Gets Better” pledge: “Everyone deserves to be respected for who they are. I pledge to spread this message to my friends, family and neighbors. I'll speak up against hate and intolerance whenever I see it, at school and at work. I'll provide hope for lesbian, gay, bi, trans and other bullied teens by letting them know that ‘It Gets Better.’”

To take the pledge, see more videos or submit your own video, visit:
http://www.itgetsbetterproject.com/

If you do make a video for the It Gets Better Project, please let me know and I will post it here too. 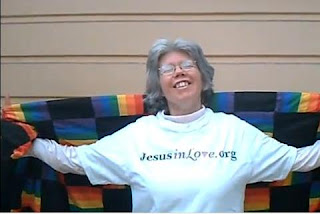 I’m glad to know that a real “youth” has watched and appreciated my video. I hope that college is going well. I check in now and then on your “Me vs. College” blog.

My video already has 259 views!