“Fight fundamentalists - with your love” 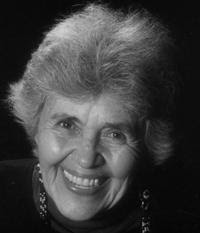 Sally Gearhart
(Photo by Peter Carni)
“I call you to fight the fundamentalists -- with your love,” said lesbian activist professor Sally Gearhart in a powerful 1990 sermon in San Francisco. Her words still ring true today as they did 20 years ago.

The same conflict between the Christian right and the LGBT community continues to rage two decades later. Only a few of the names have changed.

I was clapping along with the rest of the crowd when Gearhart preached the sermon on Aug. 19, 1990 at Metropolitan Community Church of San Francisco. We kept bursting into applause as she talked about how to counteract the Christian right while rethinking our own beliefs.

I never forgot her sermon, so I decided to listen to it again recently while duplicating tapes of worship services. I was amazed by how contemporary it seemed. She could have preached it yesterday! I wrote the following summary of Gearhart’s sermon so that we can keep on learning from her wisdom.

Gearhart taught speech and women’s studies at San Francisco State University, where she was the world’s first open lesbian to obtain a tenure-track faculty position (in 1973). Her books include the lesbian utopian novel “The Wanderground

” and “Loving Women/Loving Men: Gay Liberation and the Church

Gearhart opened her sermon with a friendly question to the congregation of MCC, which affirms the lesbian, gay, bisexual and transgender community as people of God. “Who else could better confront the people who CALL themselves Christians than a church that I think understands Christianity far better than they do?” Gearhart asked.

She described her recent visit to a conference sponsored by the Traditional Values Coalition, a Christian right group founded by Lou Sheldon.  The theme of the conference was “eradicating homosexuality.” This evoked lots of laughter -- she called the congregation “rowdy.”

Gearhart was surprised to some shared concerns with the right-wing activists. They discussed common issues such as, “What do you do when you’re getting ready for a demonstration?” It turns out there were other proudly gay and lesbian people there to check it out, too.

Then she posed the question: Why should we concern ourselves with the Traditional Values Coalition? When we do, “we’re right at the heart of the storm… at the fire’s center” “They’ve got us on their hit list. We are second only to abortion.”

She pointed out that conservative Christians are effective and control a lot of media. She said that televangelism scares her, especially the hypocrisy of preachers involved in sex scandals such as Jimmy Swaggart and Jim Bakker.

In her view, the root of capitalism is greed. It comes from the feeling of not having enough, not feeling loved. She described how the oppression of women leads to overpopulation and more unloved people. Lack of love also manifests as theology that condemns sex is sin, dating back to St. Augustine in the 4th century..

The contrasted “God the Father” as an outside authority versus God inside each individual. She critiqued the exclusivity of the fundamentalist approach. “‘No one comes to the Father but by me’ leads to nothing short of judging other people,” she said.

Gearhart advocated pluralism. “The more ways we see to salvation… the better off we actually are,” she said.

She admitted that she used to espouse a kind of lesbian fundamentalism. She recalled telling her classes that all women are lesbians and all women are superior. “Now I’m a lot less certain, but a lot more secure,” she confessed.

She urged the crowd to rethink the concept of salvation, asking, “What is it that we need to be saved from?”

Gearhart identified the root of the problem as the concept of original sin. “We’ve got to stop believing that we’re bad…. Original sin is the source of a lot of self-hatred,” she said.

She got HUGE applause when she stated, “The only bad we have in the world is the bad of serving someone else at the expense of ourselves.”

Finally Gearhart issued a call to action: “I call you to fight the fundamentalists -- with your love.”

She recommended the following tactics:


Gearhart concluded by listing the particular strengths of lesbian, gay and bisexual people. (“Transgender” was not yet part of the common vocabulary in 1990 when she gave this sermon.)

1. We have a special capacity to perceive, understand and affirm variety and difference.

2. We have some growing understanding of death and dying. (This evoked BIG “amens” from the crowd, which included many people with AIDS at a time when there was no effective treatment and a lot of people were dying.)

3. We know something as a community about feminism, which Gearhart called “the transformative philosophy of our time.”

4. We know something about love.

Immediately after Gearhart’s sermon, the MCC-SF choir sang the anti-apartheid anthem “Something Inside So Strong” by Labi Siffre. Their voices rose with such power that the whole church seemed to shake. The soloist was the wonderful Scott Galuteria, who later died of AIDS. The audience clapped in time with the music. The energy level built to a feverish pitch, especially during these lines:

When they insist that we’re not good enough,
What am I gonna do?
Look ‘em in the eye and say,
I’m gonna do it anyway!

Scott got the congregation to sing that line over and over, louder and louder:

___
Here’s a video of the song performed by its composer, Labi Siffre. His version sounds mild compared to the boisterous way that MCC-SF belted it out on the night that Sally Gearhart shook our souls.

Posted by Kittredge Cherry at 11:17 AM

Sally, you're just the greatest!
When I think of genius, visionary, and incredibly loving lesbian, I think of you. You have always been there for us; always with a kind word, a great vision.

I hope you're still going strong!

Thanks for the encouragement! Based on this post, I'm trying to match Sally with a publisher who may bring her classic back into print: "Loving Women/Loving Men: Gay Liberation and the Church." Sally says she'd be "in a state of rapture" if we can get it back in print.

I love this perspective

Thank you, Jason! Even short comments are encouraging and important.

Comments like this help me know what topics have the most value for the people who read this blog.