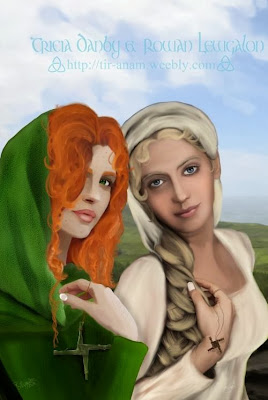 “Saint Brighid and Darlughdach of Kildare” by Rowan Lewgalon and Tricia Danby (tir-anam.weebly.com)
Saint Brigid and her soulmate Darlughdach were sixth-century Irish nuns who brought art, education and spirituality to early medieval Ireland. Brigid (c.451-525) shares her name and feast day (Feb. 1) with a Celtic goddess -- and she may have been the last high priestess of the goddess Brigid.

_______
This post is part of the GLBT Saints series at the Jesus in Love Blog. Saints and holy people of special interest to gay, lesbian, bisexual and transgender (GLBT) people and our allies are covered on appropriate dates throughout the year.