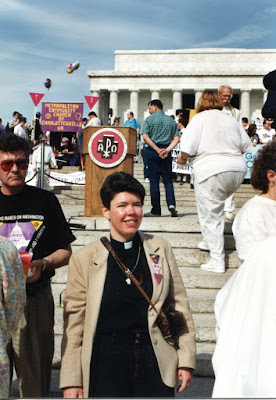 Rev. Kittredge Cherry at the March on Washington for Lesbian, Gay and Bi Rights in April 1993. This photo was taken at the MCC worship service at the Lincoln Memorial on the morning of the March.
Photos from LGBT church history are posted here today for GLBT History Month and the anniversary of Metropolitan Community Churches (MCC). It was founded on Oct. 6, 1968, to minister primarily in the lesbian, gay, bisexual and transgender community.

A new set of 18 LGBT church history photos is added to our image archive today too. It’s important to preserve our history. So I post these images as a tribute to all queer people of faith who dare to believe that God loves us just as we are.

The photos here show highlights from my own ministry in MCC during the 1980s and 1990s. I had the privilege of working closely with Rev. Troy Perry, the openly gay man who founded MCC. He was incredibly brave and visionary to create a church for GLBT people back in 1968, when homosexuality was still considered a sin, a sickness and a crime.

I joined MCC in 1985 and became an ordained minister. I served as program director at MCC San Francisco. Then I joined the denominational headquarters in Los Angeles, where I handled ecumenical and public relations, working with Troy and current MCC Moderator Rev. Nancy Wilson. As part of my job, I was part of many historic GLBT events. The following photos capture just a few moments from those memorable times. 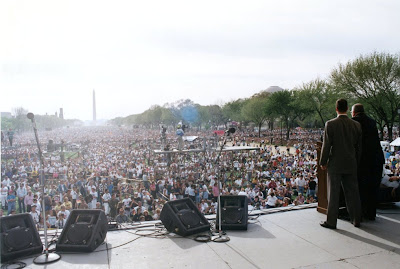 A million people at the 1993 March on Washington for Lesbian, Gay and Bi Rights listen to Rev. Troy Perry and his partner Phillip De Blieck on April 25, 1993. This photo was taken on the main stage looking toward the Washington Monument by Rev. Kittredge Cherry, who handled MCC’s media relations at the March. 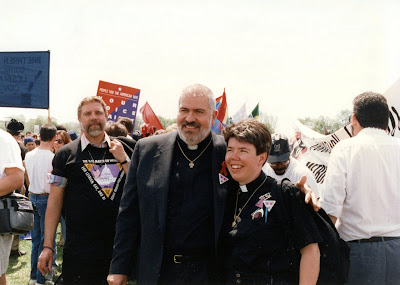 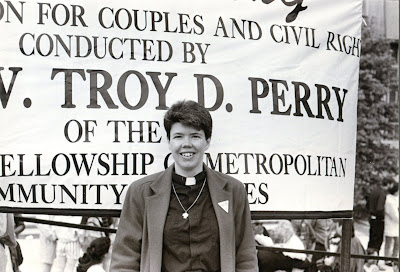 The Wedding was a spectacular group blessing of 6,000 lesbian and gay couples at the March on Washington for Lesbian, Gay and Bi Rights in April 1993. Kittredge Cherry handled media relations for the event as ecumenical and public relations officer for MCC. She is pictured here at the Wedding. It was a prayer demonstration for equal marriage rights for same-sex couples. 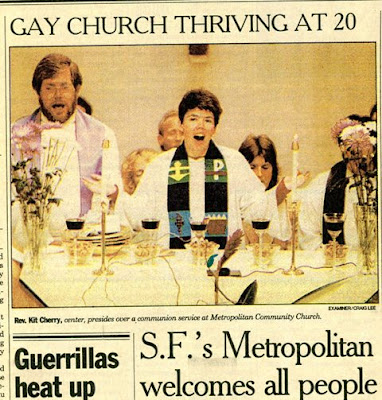 Rev. Kittredge Cherry presides over a communion service at MCC-SF in a photo from the front page of the San Francisco Examiner on April 16, 1990. It appeared with an article about the 20th anniversary of Metropolitan Community Church of San Francisco titled “Gay church thriving at 20.” 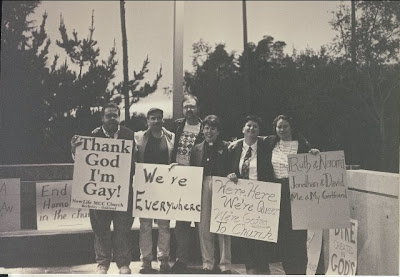 “Sometimes faith in God’s order calls all Christians to act in ways that may seem disorderly because they disrupt the social order established by human society,” Rev. Cherry said in opening remarks at the Faith and Disorder worship service held afterward in the Pacific School of Religion chapel. About half the NCC members present, including NCC General Secretary Joan Campbell, attended the service. Nearly 150 people filled the chapel. Photo by Audrey. 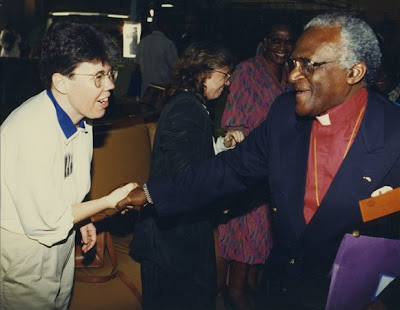 Kittredge Cherry, left, shakes hands with Bishop Desmond Tutu, the Nobel-Peace-Prize-winning human rights activist from South Africa. They met at the World Council of Churches meeting in Johannesburg in 1994. She was part of the MCC delegation there advocating LGBT religious rights. 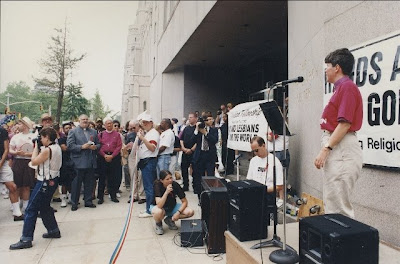 Kittredge Cherry speaks at Hands Around the God-Box, a prayer demonstration to end homophobia in the church. She organized it as MCC's national ecumenical director. It was held at the National Council of Churches headquarters in New York City in 1994 on the 25th anniversary of the Stonewall uprising. MCC founder Troy Perry is clearly visible in the crowd.

I was there in 1993 -- a bunch of us from Harvard Divinity School marched with our "Divine" t-shirts. Thanks for the memories

I was at the 1979 March -- the first Gay Rights March, I guess. Regretfully, that was WAY before the advent of digital photography, and I doubt if I even took regular photos. If I find any, though, I'll try to scan them to share. I also missed the 1987 AIDS Quilt unfurling on the Capitol Mall, but was there in 1988 when the Quilt was displayed on the Oval behind the White House. Maybe I can find pics of that. Talk about memories?