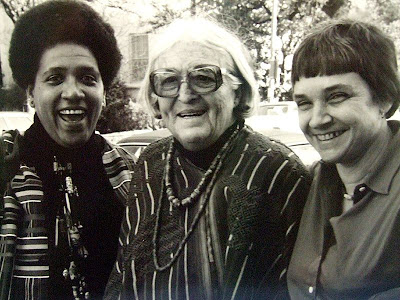 I light a memorial candle for lesbian feminist poet and essayist Adrienne Rich, who died March 27, 2012 at age 82.


For a new version of this article, click this link to Qspirit.net:
Adrienne Rich: lesbian poet with spiritual impulses

Rich was one of the most influential poets of the 20th century. Her writing was a guiding light to me and countless others, both people of faith and secular readers. The following lines from her poem “Natural Resources” (from The Dream of a Common Language: Poems 1974-1977

Rich, who had a Jewish father and Episcopalian mother, wrote about her conflicting religious background in her essay “Split at the Root” (from Blood, Bread, and Poetry: Selected Prose 1979-1985

I had the honor of meeting Rich in person in the 1980s when she spoke to the mostly LGBT congregation at Metropolitan Community Church of San Francisco, where I served on the clergy staff. Informally among ourselves, we called her “the Great One.”

Her essay “Women and Honor: Some Notes on Lying” (from On Lies, Secrets, and Silence: Selected Prose 1966-1978

In Remembrance: Adrienne Rich by Victoria Brownworth (Lambda Literary)
____
This post is part of the GLBT Saints series by Kittredge Cherry at the Jesus in Love Blog. Saints, martyrs, mystics, heroes, holy people, deities and religious figures of special interest to lesbian, gay, bisexual and transgender (LGBT) and queer people and our allies are covered on appropriate dates throughout the year.

Posted by Kittredge Cherry at 9:47 PM

Wow Kitt- I hadn't heard. So, you got me news about things I wanted to know about, yet again - thank you!!

Reading this post made me sigh very deeply, as I realized all over again that, as much as I love the inclusive evangelical world that I've found these last couple of years, there's really not anybody I know in it who would even know the name, "Adrienne Rich," let alone mourne her passing or be able to quote large chunks of "On Lies, Secrets, and Silence," or "the Dream of a Common Language." But I still sure can.

Besides the famous, "reconstitute the world," quote, some of my other favorites (which, I now understand, spoke just as much to my mcs/cfids self as to my queer self, though I don't think I understand that at the time):

"Yet if I could instruct
myself, if we could learn to learn from pain
even as it grasps us      if the mind, the mind that lives
in this body could refuse      to let itself be crushed
in that grasp     it would loosen      Pain would have to stand
off from me and listen     its dark breath still on me
but the mind could begin to speak to pain
and pain would have to answer:

"Does the infant memorize the body of the mother
and create her in absence?     or simply cry
primordial loneliness?      does the bed of the stream
once diverted      mourning       remember the wetness?"

"I choose not to suffer uselessly"

"Today I was reading about Marie Curie:
she must have known she suffered from radiation sickness
her body bombarded for years by the element
she had purified
It seems she denied to the end
the source of the cataracts on her eyes
the cracked and suppurating skin of her finger-ends
till she could no longer hold a test tube or pencil


"two women together is a work
nothing in civilization has make simple,
two people together is a work
heroic in its ordinariness,
the slow-picked, halting traverse of a pitch
where the fiercest attention becomes routine
—look at the faces of those who have chosen it"


I get so discouraged at times, having to constantly chose whether to be around people who can quote the Bible at will, or those who can quote things like this. But my soul is quite honestly tied up with both- so I end up feeling rather incomplete in either camp. So nice to be able to come here- where you value, honor, and share both. :)

"Your silence will not protect you."
No, but your silence does me an enormous amount of good. I have lived over half a century cheerfully oblivious of these three women and their "work".
Mainline Protestantism has so many delusions of relevance.

CJ, thanks for sharing so many wonderful quotes from Adrienne Rich! I have been reading many tributes to her today, and almost everyone is choosing different quotations -- and they’re ALL great. It’s amazing how much Adrienne had to say, and how well she could say it. I’m glad that you and I can share our love for her writing, as well as our spirituality and our health challenges.

I’m pleased that the Feminism and Religion Blog has cross-published my tribute Adrienne Rich today at this link:
http://feminismandreligion.com/2012/03/29/in-memory-of-adrienne-rich-lesbian-poet-1929-2012-by-kittredge-cherry/

As Adrienne would say, “I have to cast my lot with those who age after age, perversely, with no extraordinary power, reconstitute the world.” Special thanks to Xochitl!

I’m not sure if the anonymous comment means to be negative or not, but it raises an important issue. If our silence doesn’t protect us, then who DOES it protect?

"Your silence will not protect you". If not you, then who? you ask, Kitt.

I think, those who hate and who wish harm to others are always the beneficiaries of their targets' silence.

It would be easy for me to slip into a "victim mentality", ie, it's me and my kind against everyone else.

The reality - to me - is, it's MY minority against the minority of people who actively hate us and wish us harm. And the vast majority could care less, one way or the other, and will remain cocooned in their blithe inattentiveness, as long as we let them... as long as we keep silent.

The one who is protected by silence is the bully.

You know, I have a very specific memory, clear and hard as nails, of sitting on the benches outside my high school, age 15, newly and head-over-heels in love for the very first time, watching the straight-kids-in-couples laughing, holding hands, and making out, and thinking, "Why can't they just leave us alone? Why can't she and I just be like *that*? Why can't my friends just tease me about this and make jokes about how dorky I'm acting -the same as they would if I got this way over a guy- instead of being shocked or stunned and wanting to change the subject? Why can't we just walk down the hall hand in hand, and go to the dances, and send each other flowers on valentine's day, and do everything else that everybody else in love does and not have it be such an issue? Why hide and pretend and act so ashamed? I'm not ashamed....so why do I act like I am?"

And yet I realize- though I spent many, many years in pursuit of various feminist answers to those questions, and began my journey into Christianity as well, partially to find such answers, there's still always been a kind of guardedness in the asking; a kind of unwillingness to really risk engaging with those questions. Why *do* they insist on not leaving us alone? Why *must* they continually ensure that we know to keep silent? Why *do* they put so much time and energy into seeing to it that other's silence feels like safety?

You don't spend resources where you're not getting a return- so what's the return? What *does* our silence give the people who work so hard to keep us in it?

If it protects them, what -or who- does it protect them from?

CJ, thank you for eloquently raising the question “Who or what does the silence protect them from?” It brings to my mind the words of Carl Jung, “Neurosis is always a substitute for legitimate suffering.” The attempt to silence truth may be an attempt to avoid suffering… but the silence ultimately becomes more painful than what it was meant to deny.

Eric, we have discussed this subject in a private email exchange, so here I will just thank you for your discussion of how silence protects the bullies. It's very timely now because Friday is the national Day of Silence when students take a day-long vow of silence to call attention to anti-LGBT bullying. Watch for my new piece about it on Friday.