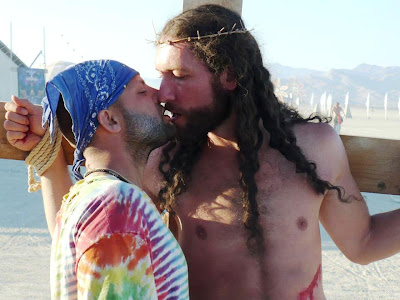 Jesus kisses a man behind the scenes at “Corpus Christi,” a play about a gay Jesus by Terrence McNally, in a new photo.

A traditional Christ seems to reach across 2,000 years of history to share a kiss with a 21st-century man in a tie-dyed shirt. Jesus is still carrying his cross, but that can’t stop him from expressing man-to-man love with a gay kiss.

The photo was taken in August 2011 at Burning Man in the Nevada desert. It shows Jesus kissing Benjamin Rexroad, who directed a production of “Corpus Christi.”

The play and surrounding controversy are examined in the new documentary film “Corpus Christi: Playing with Redemption.” It will be released in April after five years of filming and two years of edits. The sneak-preview national tour starts in San Francisco with the first official screening on April 28. Watch the new trailer below or at this link.

” retells the gospel with Jesus as a gay man in 1950s Corpus Christi, Texas. Bomb threats from religious conservatives almost prevented its Off-Broadway opening in 1998. The acclaimed play has continued to face censorship, protests, bomb threats, blasphemy charges and religious condemnation since an international revival tour by 108 Productions began in 2006.

In the new documentary, anti-gay religious groups meet “the gay Jesus play.” The film follows the troupe, playwright and audiences across the U.S. and around the world on a five-year journey where voices of protest and support collide on one of the central issues facing the LGBT community: religion-based bias.

(Photo courtesy of Benjamin Rexroad)
____
This post is part of the Queer Christ series series by Kittredge Cherry at the Jesus in Love Blog. The series gathers together visions of the queer Christ as presented by artists, writers, theologians and others.

When i see image first, i was thinking is it really Jesus??