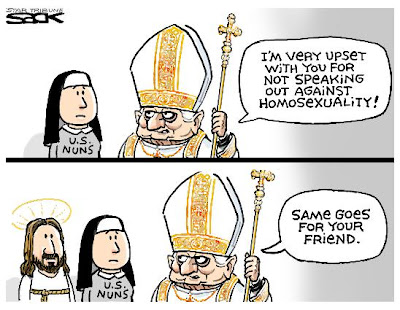 “Vatican Crackdown” by Steve Sack shows a grouchy Pope warning a nun, “I’m very upset with you for not speaking out against homosexuality.”

In the next panel, Jesus appears beside the nun. “Same goes for your friend,” the Pope hisses.

So true! Jesus said nothing against homosexuality in the Bible. It’s a maddeningly inconvenient truth for conservatives like the Pope.

Vatican officials are cracking down on U.S. nuns for supporting LGBT rights, women’s ordination and healthcare reform. The Vatican recently issued a harsh report criticizing the Leadership Conference of Women Religious, which represents the majority of the 57,000 Roman Catholic nuns in the United States.

Thanks, Steve, for permission to share your cartoon here! Thanks, Trudie, for alerting me to this cartoon!
__
Related link:

You already know, of course, that this is a topic of special interest to me, since I keep posting references to the blog of Mary Johnson, author of "An Unquenchable Thirst", including the Huffington Post piece that she did: http://www.huffingtonpost.com/mary-c-johnson/american-nuns-will-not-be-bullied_b_1449317.html?ref=fb&src=sp&comm_ref=false

I also can't help referring to the book "The Singer and the Song" by Miriam Therese Winter. In her very simple and poetic memoir, I believe she puts into perspective where the nuns are coming from.

The fact that a few repressed young women of today are entering "traditional" and "subservient" orders is not going to be enough to allow the Catholic Church to continue its ongoing antifeminist and misogynist repression. The many women, both religious and lay, who have decided to serve Jesus elsewhere are testimony to that!

Somehow I feel like humor is the best way to deal for me to deal with this latest Vatican crackdown. Thanks, Trudie, for the useful links and references, including the Miriam Therese Winter book.

I received a lovely note from the cartoonist Steve Sack today. He said it was nice to get a positive response to the cartoon here at the Jesus in Love Blog because many of his readers at the Minneapolis Star-Trib were unhappy about it. I’m glad to know that this little blog is encouraging a progressive artist who normally reaches a much bigger audience than I do here.