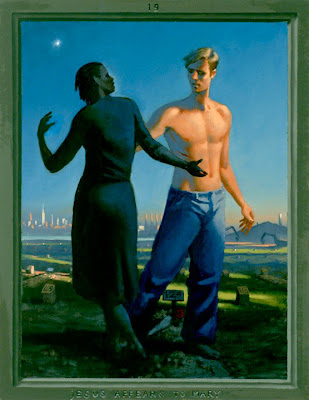 19. Jesus Appears to Mary (from The Passion of Christ: A Gay Vision) by Douglas Blanchard
“Saying this, she turned round and saw Jesus standing, but she did not know that it was Jesus…. Jesus said to her, “Do not hold me, for I have not yet ascended.” -- John 20:14, 17 (RSV)

Two friends meet at sunrise in “Jesus Appears to Mary.” They circle each other as Mary gestures with happy surprise at finding Jesus alive in the graveyard. The colors are suddenly much brighter. The morning star shines in a gorgeous blue sky while the first rays of dawn awaken the spring-green grass. The frame itself is green -- even the faux wood has sprung to life! A patch of sunlight catches the risen Christ, but Mary remains in shadow.

On the horizon are excavating machines and a body of water that separates them from the distant city skyline. Jesus and Mary are surrounded by numbered gravestones. The one behind Jesus is marked “124” -- the same number on the mysterious tag around Jesus’ neck in the first painting of this series. The artist confirmed that he chose “124” because it has no special meaning in Christianity. Jesus died as a human castoff, stripped of his name and labeled with a random number. The gravestones and setting look like Hart Island, a public cemetery for the unknown and indigent in New York City. Operated by prison labor, Hart Island is the world’s largest tax-funded cemetery with daily mass burials and more than 850,000 buried there.

The contrast and dynamic tension between the figures suggests that this is the moment known as “Noli me tangere,” the Latin version of Jesus words to Mary when she recognizes him after his resurrection. In the Bible story, Mary Magdalene goes to visit Jesus’ tomb before sunrise. She is distraught to discover that his corpse is missing -- until she sees the risen Christ. Overcome with emotion, she starts to hug him, but he stops her with a request that has multiple translations. The original Greek is best translated as “Stop clinging to me” or “Cease holding on to me.” But the Latin translation is embedded in cultural tradition: “Don’t touch me (noli me tangere) for I have not yet ascended.” The scene has been an iconographic standard for artists throughout the Christian world from late antiquity to the present.

Jesus made his first post-resurrection appearance to a woman in an era when women weren’t even allowed to testify at legal proceedings. And yet the risen Jesus chose a woman as his first witness. This is good news for all the disenfranchised, including today’s LGBT people. Mary Magdalene has an undeserved bad reputation. The church mistakenly labeled her as a prostitute for centuries, but the Bible does NOT say she committed sexual sins. Progressive theologians are reclaiming her as a role model. The Bible portrays Mary Magdalene as the most important woman follower of Jesus. She supported his ministry with her resources, traveled with him on his last journey to Jerusalem, witnessed his crucifixion, and hurried to his tomb before sunrise.

“Now when he rose early on the first day of the week, he appeared first to Mary Magdalene, from whom he had cast out seven demons.” -- Mark 16:9 (RSV)
Mary Magdalene went to the tomb of her friend Jesus early on Sunday morning. It was empty! She started crying and someone came up to her. Mary thought he was the gardener until he spoke her name. Her heart leaped as she recognized Jesus! People had wondered about her relationship with Jesus from the start. The bond that springs up sometimes between a gay man and a woman is incomprehensible to most. They don’t understand how a man and a woman can love each other without being sexual. And why would Jesus, who had many powerful male followers, pay so much attention to a woman? Yet he chose Mary as the first witness to his resurrection.
Jesus, where are you now? Will you speak to me?
___
This is part of a series based on “The Passion of Christ: A Gay Vision,” a set of 24 paintings by Douglas Blanchard, with text by Kittredge Cherry. For the whole series, click here.

Scripture quotations are from Revised Standard Version of the Bible, copyright © 1946, 1952, and 1971 National Council of the Churches of Christ in the United States of America. Used by permission. All rights reserved.
Posted by Kittredge Cherry at 10:40 AM