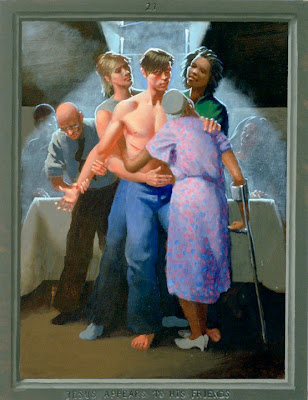 21. Jesus Appears to His Friends (from The Passion of Christ: A Gay Vision) by Douglas Blanchard (Collection of Bill Carpenter)
“And he said to them, ‘Why are you troubled, and why do questionings rise in your hearts? See my hands and my feet, that it is I myself; handle me, and see.’” -- Luke 24:38-39 (RSV)

Friends react with joy -- and some doubt -- to the return of the risen Christ in “Jesus Appears to His Friends.” Jesus allows himself to be embraced and examined by his diverse friendship group. He gets hugs from his Beloved Disciple and an elderly woman with a cane as a young black woman smiles beside him. Meanwhile a bald skeptic in a suit inspects his wounded wrist. Other disciples watch from behind. The red gash in Jesus’ side stands out against his handsome physique. The same room is pictured in Blanchard’s Last Supper, but here the mood is transformed from a dark-toned goodbye to a happy hello lit up with lavender and with warm flesh tones. Misty moonlight pours in from the back window in the shape of an ascending dove, hinting at the presence of the Holy Spirit.

As usual in Blanchard’s series, Jesus attracts a surprisingly varied group. The imagery and title emphasize that the people around Jesus were his friends, not just his disciples. As he told them at the Last Supper, “No longer do I call you servants, for the servant does not know what his master is doing; but I have called you friends, for all that I have heard from my Father I have made known to you.” (John 15:15) Some of the faces are familiar from previous paintings: The young black woman looks like Mary Magdalene in “Jesus Appears to Mary.” The same Beloved Disciple wrapped a loving arm around Jesus in “The Last Supper.”

Blanchard’s progressive politics are evident in the way that Jesus focuses on those who are gay, black and disabled, while ignoring the old white guy. It’s almost humorous how everyone else is delighted to see Jesus, while the pragmatist in the tie and glasses is busy fact-checking. But Jesus doesn’t push him away. The Doubting Thomas figure is welcome to check the wounds scientifically. Many people, queer or otherwise, share the skeptic’s desire to make decisions based on direct experience and not get caught up in all the hoopla about Jesus. Thomas provides a positive role model of someone who is not going to fall for any religious trickery -- and yet Jesus still welcomes him into his circle of friends.

The painting belongs to Bill Carpenter of Soulforce, a civil-rights group that works to free LGBT people from religious and political oppression. He picked out the painting when Blanchard’s Passion series was displayed at the 2007 National Festival of Progressive Spiritual Art in Taos, New Mexico. Carpenter was there to teach nonviolence resistance in preparation for anti-LGBT attacks which fortunately did not materialize.

He explains why he selected this painting from the series of 24 panels: “I chose ‘Jesus Appears To His Friends’ because, through it, I connected with the humanity of Jesus…He had friends! And, because Doug showed Jesus’ friends as a beautifully diverse collection of humanity…just like our world…and I felt that Jesus truly welcomed each and every soul into his world…with no qualification or judgment and I wanted to be reminded of that potential within me.”

The painting fits into the long artistic tradition of Doubting Thomas, a common subject at least since the sixth century. Formally known as the Incredulity of St. Thomas, the scene has been painted by famous artists from Caravaggio to Georges Roualt. The Bible says that the disciple Thomas rejected reports from others who saw the risen Christ. “Unless I see in his hands the print of the nails, and place my finger in the mark of the nails, and place my hand in his side, I will not believe,” he insisted. His doubt turned to faith when Jesus returned and invited him to do just that. Modern dress and a contemporary cast of characters bring Blanchard’s version alive. LGBT people may appreciate the same-sex affection depicted between Jesus and the Beloved Disciple, which is Blanchard’s new contribution to the standard repertoire of Doubting Thomas iconography.

“The doors were shut, but Jesus came and stood among them, and said, ‘Peace be with you.’ Then he said to Thomas, ‘Put your finger here, and see my hands; and put out your hand, and place it in my side; do not be faithless, but believing.’” -- John 20:26-27 (RSV)
Jesus’ friends were hiding together, afraid of the authorities who killed their beloved leader. The doors were shut, but somehow Jesus got inside and stood among them. They couldn’t believe it! He urged them to touch him, and even invited them to inspect the wounds from his crucifixion. As they felt his warm skin, their doubts and fears turned into joy. Jesus liked touch. He often touched people in order to heal them, and he let people touch him. He defied taboos and allowed himself to be touched by women and people with diseases. He understood human sexuality, befriending prostitutes and other sexual outcasts. LGBT sometimes hide themselves in closets of shame, but Jesus wasn’t like that. He was pleased with own human body, even after it was wounded.
Jesus, can I really touch you?
___
This is part of a series based on “The Passion of Christ: A Gay Vision,” a set of 24 paintings by Douglas Blanchard, with text by Kittredge Cherry. For the whole series, click here.

Scripture quotations are from Revised Standard Version of the Bible, copyright © 1946, 1952, and 1971 National Council of the Churches of Christ in the United States of America. Used by permission. All rights reserved.
Posted by Kittredge Cherry at 12:29 PM