LGBT altar given to Swedish cathedral by Elisabeth Ohlson Wallin 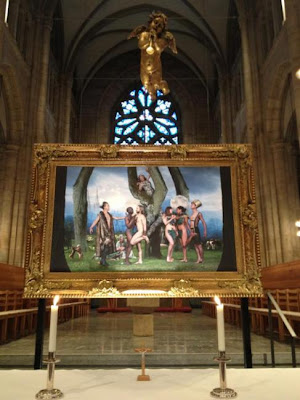 “I want to test the church in Sweden to see if they are as LGBT-friendly as they say,” Ohlson Wallin explained. “I gave the church the altar as a gift. Now we are waiting for the church to accept the gift or no.”

The altarpiece was unveiled May 12 before television cameras and a crowd of 200 at the Church of Sweden cathedral in Skara, the artists’s hometown. On the same day it served as the backdrop for the first same-sex wedding in the cathedral’s 1000-year history. Two men were joined in a marriage ceremony performed by pastor Lars Gårdfeldt. It is the first LGBT altar in Sweden and perhaps the world. Although it has already been used for a cathedral wedding, it will not be officially accepted unless diocesan and county boards agree to it.

The altar shows the Garden of Eden from a queer perspective, including two Adams, two Eves and a transsexual instead of a serpent. It is based on a painting of Paradise by 15th-century German artist Lucas Cranach.

Ohlson Wallin told reporters that she wanted to place lesbian, gay, bisexual and transgender people in paradise instead of condemning them to hell. She also created the altar to remind people of Martin Luther’s reassessment of sexuality as God’s gift, not a reason for punishment. The artist hopes that the altar will be rolled out for LGBT weddings, baptisms or funerals in the church.

Ohlson Wallin is best known for “Ecce Homo,” a series of 12 photos recreating the life of Jesus in a contemporary LGBT context. It became one of Europe’s most noticed and notorious art exhibits, even arousing the disapproval of Pope John Paul II—who reacted by canceling his planned audience with the Swedish archbishop. Her work is featured in “Art That Dares: Gay Jesus, Woman Christ, and More

Photos courtesy of Elisabeth Ohlson Wallin, www.ohlson.se
Posted by Kittredge Cherry at 9:57 AM

Thanks for this piece of art - I have used it in a post entitled Rainbow Altars over at thebibleindrag.blogspot.com. I litterally looked around for a week scouring the internet for LGBT altars and found very little. That is until this post and the beautiful work by Elisabeth. Appreciate you sense of the role of art in queering the Christian tradition!

David, you’re right about how rare LGBT altars are. Elisabeth asked me if I knew of any other LGBT altars in the world. Like you, I didn’t find many LGBT altars when I scoured the Internet, except for simple ones like a rainbow flag or rainbow candle on an altar table… or a Day of the Dead memorial for a queer person.

I visit your Bible in Drag blog regularly. I enjoyed reading your reflection there on LGBT altars. Thank you for including a credit line with a link back to the Jesus in Love Blog when you shared this photo there.

I read your bio carefully tonight and I’m delighted to find another LGBT minister who loves art. It’s a rare but valuable combo of specialties.

So long as we devise symbols and construct places of separateness we will always be separate people, ignoring God's own words - neither male nor female he created them.
Br Graham-Michoel

Actually Genesis 1:27 says “male AND female He created them.” A queer interpretation of this passage is that each person includes BOTH male and female. People are not created genderless -- even though Paul did write “in Christ there is neither male nor female.” Thanks for commenting, Brother Graham-Michoel. This altar does lead to interesting reflections on creation and gender.