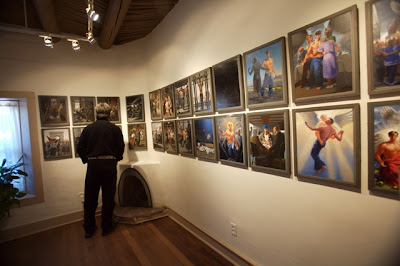 “The Passion of Christ: A Gay Vision” by Douglas Blanchard, at JHS Gallery in Taos, NM (Photo by Dorie Hagler)

A gay vision of Christ’s Passion was the top LGBT spiritual arts story for 2012, the Jesus in Love Blog announced today.

In second place was a cartoon for marriage equality showing Jesus in bed with rock star Freddie Mercury.

The top 10 LGBT spiritual arts stories of the year were named today by Kittredge Cherry, founder of Jesus in Love. The ratings are based on pageviews reported by Google Analytics.

The blog’s most popular post of the year was an introduction to “The Passion of Christ: A Gay Vision,” a series of 24 paintings by Douglas Blanchard with reflections by Kittredge Cherry. The paintings present Jesus as a contemporary gay man in a modern city.

“The gay Passion series was most popular story of 2012, but religious cartoons and queer historical research were also big crowd pleasers,” Cherry said. “Marriage equality was a recurring theme that ran through several of the Top 10 stories this year. LGBT saints and queer Bible interpretation continued to be important to readers of the Jesus in Love Blog.”

Here is a list of the year’s top 10 stories. Click the headlines to see the original posts at the Jesus in Love Blog.

All 24 paintings in Douglas Blanchard’s epic masterpiece “The Passion of Christ: A Gay Vision” were posted with new commentary by Kittredge Cherry for Holy Week last year. It covers the events of Palm Sunday, the Last Supper, and his arrest, trial, crucifixion and resurrection. Blanchard’s images show Jesus being jeered by fundamentalists, tortured by Marine look-alikes and rising again to enjoy homoerotic moments with God and friends. He faces forms of rejection that feel familiar to contemporary LGBT people.

Here is a list of individual gay Passion posts in order of popularity. All of these would have made this year’s top 10 list, but they are combined here to prevent the gay Passion from dominating the whole list:

Day 5: Jesus Before the Soldiers; Jesus is Beaten

Day 6: Jesus goes to his execution, is nailed to the cross, and dies

Day 2: Jesus drives out the money changers and preaches in the Temple

Blanchard, a gay painter based in New York, and Cherry, a lesbian minister and art historian based in Los Angeles, plan to run an updated version of the series on the Jesus in Love Blog for Holy Week this year and later turn it into a book. More info


2. Jesus and Freddie Mercury: Marriage Made in Heaven cartoon supports equality and other religious political cartoons

A gay Jesus cuddles in bed with rock star Freddie Mercury in “Marriage Made in Heaven” by cartoonist Mr. Fish of ClownCrack.com, also known as Dwayne Booth. He created the image to support marriage equality. After a vote banning same-sex marriage, Mr. Fish decided to expose the hypocrisy of anti-gay Christians indirectly by showing Jesus in bed with a gay icon. More info

Two other cartoons on religion and LGBT rights were also hugely popular at the Jesus in Love Blog in 2012:

Sergius and Bacchus were third-century Roman soldiers, Christian martyrs and gay men who loved each other. Their story is told here in words and art, including historical works and contemporary art. The couple was openly gay, but secretly Christian -- the opposite of today’s closeted Christians. The close bond between Sergius and Bacchus has been emphasized since the earliest accounts, and recent scholarship has revealed their homosexuality. More info


4. Gay centurion: Jesus heals a soldier’s boyfriend in the Bible

Jesus praised a gay soldier as a role model of faith and healed his male lover in the gospels, according to many Bible experts. Both Matthew 8:5-13 and Luke 7:1-10 tell how a Roman centurion asked Jesus to heal the young man referred to in Greek as his “pais.” The word was commonly used for the younger partner in a same-sex relationship. It is usually translated as boy, servant or slave. In recent years progressive Bible scholars have concluded that the centurion was in a homosexual relationship with the “slave who was dear to him” in the gospel story. More info

Jemima Wilkinson (1752-1819) was a queer American preacher who woke from a near-death experience in 1776 believing she was neither male nor female. She changed her name to the “Publick Universal Friend,” fought for gender equality and founded an important religious community. In 1776, the same year that America issued the Declaration of Independence, Wilkinson declared her own independence from gender. Wilkinson is recognized as the first American-born woman to found a religious group, but is also called a “transgender evangelist.” More info

Jesus kisses a man behind the scenes at “Corpus Christi,” a play about a gay Jesus by Terrence McNally, in a new photo. A traditional Christ seems to reach across 2,000 years of history to share a kiss with a 21st-century man in a tie-dyed shirt. Jesus is still carrying his cross, but that can’t stop him from expressing man-to-man love with a gay kiss. More info

Artist Tony De Carlo affirms the holiness of gay love with colorful, festive paintings of gay saints, Adam and Steve, same-sex marriage and much more -- all with a zesty Latino flavor.  Gay saints in his art include the martyred male couple Sergius and Bacchus and a series on Sebastian, the protector against plague. De Carlo began his ongoing Sebastian series in response to the AIDS crisis. De Carlo has done more than 20 paintings of Adam and Steve as the original gay couple. More info


8. Ash Wednesday: A day to recall queers executed for sodomy

Ash Wednesday is an appropriate time to reflect on the sins of the church and state against queer people, including the burning of “sodomites” and execution of thousands for homosexuality over the past 1,000 years. This article uses historical images and research to remember and honor all those killed for homosexuality in church- or state-sanctioned executions. In 2013 Ash Wednesday will be Feb. 13. More info

Joan of Arc was a tough cross-dressing teenage warrior who led the medieval French army to victory when she was 17. She is a queer icon, girl-power hero and patron saint of France. Smart and courageous, Joan of Arc (c. 1412-1431) had visions of saints and angels who told her to cut her hair, put on men’s clothes and go to war. At age 18 she helped crown a king and at 19 she was killed by the church that later made her a saint. She died for her God-given right to wear men’s clothing, the crime for which she was executed. More info


10. Francis of Assisi’s queer side revealed by historical evidence

Historical records reveal a queer side to Saint Francis of Assisi, one of the most beloved religious figures of all time. The 13th-century friar is celebrated for loving animals, hugging lepers, and praying for peace, but few know about his love for another man and his gender nonconformity.  Research by Franciscan scholar Kevin Elphick shows that when Francis was a young man, he had an unnamed male companion whom he dearly loved. Other friars called Francis as “Mother” and “Lady Poverty.” Francis allowed a widow to enter the male-only cloister, naming her “Brother Jacoba.” More info

Copyright © Kittredge Cherry. All rights reserved.
http://www.jesusinlove.blogspot.com/
Jesus in Love Blog on LGBT spirituality and the arts
Posted by Kittredge Cherry at 11:11 AM