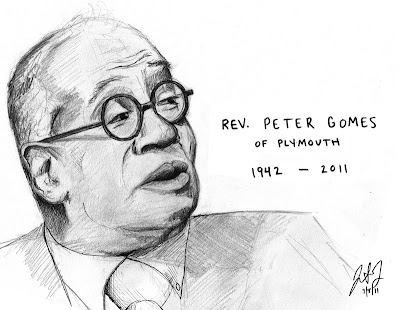 Peter Gomes was a gay black Baptist minister at Harvard and one of America’s most prominent spiritual voices for tolerance. He used his national celebrity as a “gay minister” to make the religious case for LGBT people, even though he reportedly disliked the label. He died at age 68 on this date (Feb. 28, 2011).

A man of many contradictions, Gomes became a Democrat in 2007 after decades as a conservative Republican. He even gave the benediction at President Ronald Reagan’s second inauguration in 1985 and preached at the National Cathedral for the inauguration of Reagan’s successor, George Bush.

Gomes (May 22, 1942 - Feb. 28, 2011) was born in Boston to a black African immigrant father and a mother from Boston’s African American upper middle class. He grew up in Plymouth, Massachusetts.  He studied at Bates College (where a chapel was named after him in 2012) , earned a divinity degree at Harvard University, and taught Western civilization at Tuskegee Institute in Alabama for two years before returning to work at Harvard in 1970. Four years later he became the first black person to serve as chief minister to Harvard. He held the positions of Pusey minister at Harvard’s Memorial Church and Plummer professor of Christian morals for the rest of his life.

He came out publicly as “a Christian who happens as well to be gay” at a student rally in 1991 after a conservative student magazine at Harvard published a condemnation of homosexuality.  “I now have an unambiguous vocation -- a mission -- to address the religious causes and roots of homophobia,” he later told the Washington Post. “I will devote the rest of my life to addressing the 'religious case' against gays.”

In his 1996 best-seller, “The Good Book: Reading the Bible with Mind and Heart,” he showed how the Bible was misused to defend homophobia, racism, anti-Semitism and sexism.

His 2007 book “The Scandalous Gospel of Jesus: What's So Good About the Good News?

” went on to show that Jesus was a subversive whose radical gospel always overturns the status quo.

Among Gomes’s many admirers is artist Jon Dorn, who drew the portrait at the top of this post. Dorn is a cartoonist, filmmaker, and Master of Fine Arts student at Emerson College in Boston. He also serves on the Plymouth Cultural Council.

A musical tribute to Gomes is “I Beseech You Therefore, Brethren” by composer Craig Phillips, music director at All Saints’ Episcopal Church in Beverly Hills. It was originally commissioned by members of Harvard’s Class of 1978 to celebrate Gomes' retirement, but he died before its premiere so it was sung at his memorial. The anthem has become a memorial to Gomes' legacy. It is included on the 2014 album “Spring Bursts Today: A Celebration of Eastertide” by Harvard University Choir. Gomes himself selected the text, which was one of his favorite scriptures:

“I beseech you therefore, brethren, by the mercies of God that ye present your bodies a living sacrifice, holy, acceptable unto God, which is your reasonable service. And be not conformed to this world: but be ye transformed by the renewing of your mind, that ye may prove what is that good and acceptable and perfect will of God.” (Romans 12:1–2)

Gomes’ blend of scholarship, wisdom and accessibility is expressed in a few selected quotations:

“Hell is being defined by your circumstances, and believing that definition.” -- Peter Gomes

“The question should not be ‘What would Jesus do?’ but rather, more dangerously, 'What would Jesus have me do?'” -- Peter Gomes in The Scandalous Gospel of Jesus: What's So Good About the Good News?

“The battle for the Bible, of which homosexuality is the last front, is really the battle for the prevailing culture, of which the Bible itself is a mere trophy and icon. Such a cadre of cultural conservatives would rather defend their ideology in the name of the authority of scripture than concede that their self-serving reading of that scripture might just be wrong, and that both the Bible and the God who inspires it may be more gracious, just and inclusive than they can presently afford to be.” -- Peter Gomes in The Good Book: Reading the Bible with Mind and Heart

___
Books by Peter Gomes include:

The Good Book: Reading the Bible with Mind and Heart

The Scandalous Gospel of Jesus: What's So Good About the Good News?

The Good Life: Truths that Last in Times of Need

Strength for the Journey: Biblical Wisdom for Daily Living

Posted by Kittredge Cherry at 9:45 AM

Thank you for posting again about Peter Gomes. As I've commented previously, we knew him "back when" in Tuskegee and Ray, especially, was impressed with him during their interactions in faculty meetings and so on. I need to get going again on rereading some of his books in my possession.

Those who are interested can find Ray’s personal memoir about Peter Gomes by following the link to
“Peter Gomes at LGBT Religious Archives Network” in my profile, and then clicking on “Remembrances.” Thanks, Trudie, for the reminder of your connection to this important man. Over on my Facebook page a friend speculated that he would be speaking out on economic justice if he were still with us today.