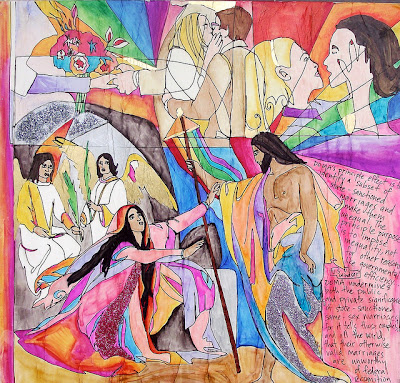 The Tennessee artist unveiled the 15th and final painting in series last week. The first 14 paintings made their debut earlier this year during Lent, but Button waited until the Supreme Court decision before creating the last picture.

It shows the risen Christ greeting Mary Magdalene against a kaleidoscope of scenes related to the Supreme Court’s June 26 decisions legalizing same-sex marriage. Kris Perry and Sandy Stier, plaintiffs in the Proposition 8 case, marry each other at a wedding that finally gives legal status to their love. Edie Windsor, plaintiff in the Defense of Marriage Act case, is shown with her late partner Thea Spyer, whose bequest prompted the landmark lawsuit. Behind Jesus is text from the Supreme Court ruling: “DOMA’s principal effect is to identify a subset of state-sanctioned marriages and make them unequal….” Jesus even appears to be holding a rainbow banner.

The resurrection image provides a celebratory and suitable ending for the LGBT Stations series, which shows that Jesus suffers with LGBT people. Button juxtaposes his journey to Calvary with milestones from the last 100 years of LGBT history, including Nazi persecution, the Lavender Scare, the Stonewall Rebellion, the assassination of gay politician Harvey Milk, the AIDS pandemic, the murder of transgender woman Rita Hester, and LGBT teen suicides.

Resurrection scenes are the rarest images in queer Christian art. Button’s version makes the glorious connection between the crucified Christ coming out of the tomb to new life and persecuted queer people coming out of the closet to celebrate our love with weddings that are just as valid as any other. The resurrection of Christ is the ultimate act of God’s triumph over the forces of death and destruction. Likewise the legalization of same-sex marriage is a contemporary example of love’s victory over hate. The idea of a gay or lesbian couple getting married used to be unthinkable. It seemed as unlikely as a dead man rising from the tomb.

“The grouping of Perry, Stier, Windsor and Spier with Mary Magdalene carries with it a deep theological significance,” Button wrote in her reflection on the painting at Believe Out Loud, an online network empowering Christians to work for LGBT equality. She points out that Mary Magdalene was a trusted disciple and “apostle to the apostles” who has been unjustly stigmatized as a harlot.

“It is only fitting that Mary Magdalene would accompany the women in this painting, who together challenged systematic discrimination against LGBT people in our nation’s highest court,” Button concludes. “With faith, I pray that this image will signify a greater shift in public opinion as we move beyond baseless stigmatization of the LGBT community to embrace our diversity as a blessed gift from God.”
____
Related links:

LGBT Stations of the Cross show struggle for equality (Jesus in Love)
____
Special thanks to Colin for the news tip.

Copyright © Kittredge Cherry. All rights reserved.
http://www.jesusinlove.blogspot.com/
Jesus in Love Blog on LGBT spirituality and the arts
Posted by Kittredge Cherry at 9:08 AM