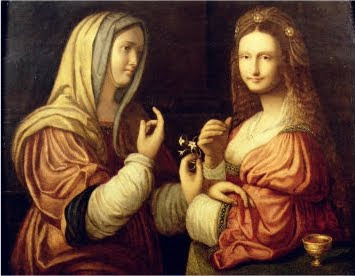 Biblical patriarchs have also hidden their marriages by claiming their wives were their sisters. In the book of Genesis, Abraham claimed his wife Sarah was his sister on two different occasions (Genesis 12:10-20; 20:1-18) and once Isaac passed off his wife Rebekah as his sister (Genesis 26:1-16). 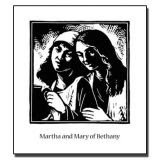 
Posted by Kittredge Cherry at 8:19 AM

How come a mare paintings can prove that the ladies in the painting are lesbians? Do you mean to say that all those " SISTERS" who have devoted their lives for the sake of religion are lesbians. I would like to have clear evidence from the Holy Bible and the Gospels ,where it is mention that they are lesbians.

Ah, Nyenda, we would all like to have clear evidence from the Bible! But the Bible is vague and open to debate and multiple meanings about Martha and Mary, as well as many other subjects.

I am not necessarily trying to “prove” that Martha and Mary were lesbians, but as the title of my article says, raising the question: “Sisters or lesbian couple?”

Certainly a mere painting cannot prove that Martha and Mary were lesbians. Neither do I mean to say that all “sisters” are lesbians. However, SOME who call themselves “sisters” are actually lesbians. I am viewing the Bible with a “hermeneutic of suspicion,” assuming that lesbians are there but have been hidden. So I look carefully for any slight clue of LGBT people in order to counteract the bias of those who wrote the Bible.