Je suis Charlie: Solidarity with those killed for religious images at Paris newspaper 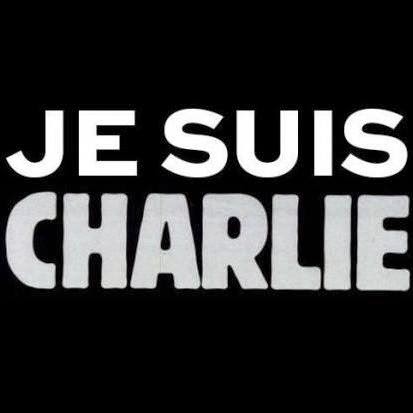 I post “Je suis Charlie” in solidarity with the journalists and artists killed in the attack on the French newspaper Charlie Hebdo Jan. 7.

It is French for “I am Charlie” – because I am a journalist and publisher of controversial religious art here at the Jesus in Love Blog. I honor the memory of all 12 who died in the Paris shooting and offer sympathy to their family and friends.

I am also a person of faith who opposes the use of religion as a justification for violence. The terrorists claimed that they were killing in God’s name.

Like the staff of Charlie Hebdo, I get hate mail from religious fundamentalists for what I publish -- although they usually threaten me with hellfire in the afterlife, not violence. Islamist radicals are not the only ones who feel threatened by “irreverent” images.

For example, Bill Donahue of the Catholic League responded to the Paris shootings by issuing a news release titled “Muslims are right to be angry.” (At least he begins by saying, “Killing in response to insult, no matter how gross, must be unequivocally condemned.”)

It’s easy for English-language readers to mistake the social media slogan “Je suis Charlie” for “Jesus is Charlie” – a revealing slip. It suggests that when they killed the Charlie Hebdo staff, Jesus was crucified again.

Jesus is Charlie?! I can imagine Jesus answering, “I am,” – the holy phrase God spoke to Moses from the burning bush and that Jesus used multiple times to declare himself in John’s gospel. Jesus himself was charged with blasphemy. It was one of the charges that led to his crucifixion.

The deaths at Charlie Hebdo echo the martyrdom story of the Passion. I wrote about the crucifixion (and resurrection) of Jesus in my new book “The Passion of Christ: A Gay Vision.” It features art that Doug Blanchard painted while grappling with his own faith struggles as a gay New Yorker who witnessed the 9/11 terrorist attacks.

The purpose of reflecting on the Passion is not necessarily to worship Christ, but to remember the ongoing cycle of human violence, and to seek a way to move from suffering to freedom. The Passion story invites each viewer to stand at the cross as a compassionate witness—and to take up their own cross, whatever it may be.

On the Facebook page for “The Passion of Christ: A Gay Visison,” Doug spoke for both of us when he posted this message today:

“Of course we are Charlie! How could we be anything else? Our book takes on matters of religion, sexuality, and politics. Some people love us and some hate us.”

We Pray in Jessus ame for these family in Paris with love!