“Womansword” by Kittredge Cherry will be published by Stone Bridge Press 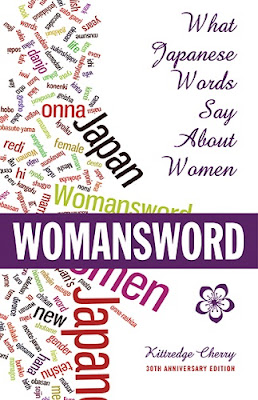 “Womansword: What Japanese Words Say About Women” by Jesus in Love founder Kittredge Cherry will be published in a 30th anniversary edition on Nov. 15 by Stone Bridge Press.

The book provides a portrait of Japanese womanhood with linguistic, sociological, and historical insight into issues central to the lives of women everywhere. The New York Times praised it as “extraordinarily revealing.”

Before she became a minister and launched the Jesus in Love Blog, Cherry studied in Japan on a Rotary International Journalism scholarship at Kobe College and International Christian University in Tokyo. She wrote about Japan for many publications, including Newsweek and the Wall Street Journal. Cherry holds degrees in journalism, art history, and religion. She continues to blog on Japan at her new website, JapanAdvise.com.

Cherry's unusual journey from Japan journalism to LGBTQ ministry is one of the subjects she discusses in the introduction to the 30th anniversary edition. The new introduction also highlights many revealing, useful, and fun new woman-related words that entered the Japanese language in the last three decades. It shows how things have—and haven't—changed.

Michael Bronski, professor in the department of women, gender and sexuality studies at Harvard, has endorsed “Womansword” as well as Cherry’s more recent books on LGBTQ Christian themes.

“Kitt Cherry has a long, storied career balancing and brokering the values of tradition with the excitement of the modern,” Bronski said. “‘Womansword’ charts, though evolving language, changes that have radically transformed Japanese women – and Japan -- for decades. From tom-boy fashion ("Prince Lolita") to national discussions of a possible female emperor, Cherry captures the vibrancy of the new Japan. This book is a vital read for feminists, linguists, and everyone interested in how culture changes.”

Bronski has written extensively on culture, gender, sexuality and politics, including “A Queer History of the United States,” winner of the Lambda Literary Award for non-fiction.

Emerging trends in Japanese culture, for example, have brought high-achieving “science-women” and opened the way for the androgynous “x-gender.” The Japanese government began promoting “womenomics.” Three decades ago Japanese women hurried to find a husband by age 25 to avoid becoming stale “Christmas cakes.” Now they wait longer to marry, but still risk being called “New Year’s Eve noodles” if they don’t wed by age 31. “Maternity marks” help them navigate pregnancy, while “retirement divorces” are on the rise.

The book will be available in digital format as an e-book for the first time in its 30-year history.

The new edition is also recommended by Ayako Kano, associate professor of East Asian Languages and Civilizations at the University of Pennsylvania.

“After three decades, ‘Womansword’ still cuts to the core of gender dynamics in Japanese society. With a new Introduction giving us updates on various topics and a plethora of recent words, this book remains one of the most accessible and intriguing guides to the status of women in Japanese society,” says Kano. She is the author of “Japanese Feminist Debates: A Century of Contention on Sex, Love, and Labor.”

Cherry’s specialties include writing about women’s issues, language, culture, sexuality, religion and communication. Her books have been translated into Chinese, German, Japanese, and Polish. She holds degrees in journalism, art history, and religion.

Stone Bridge Press was established in Berkeley, California, in 1989. It has some 150 titles in print, covering such Japan- and Asia-related areas as language, business, literature, manga, design, and culture.

“Stone Bridge is the right press for the new edition of ‘Womansword’ both because of its excellence in publishing Japan books and because its founder Peter Goodman was present for the creation of the original version at Kodansha International 30 years ago,” Cherry said.