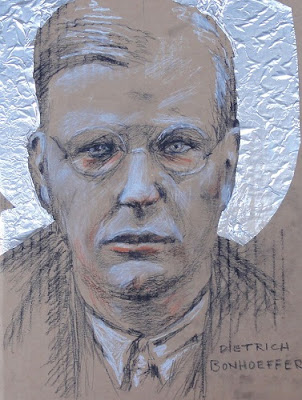 Speculation about his likely gay orientation focuses on his love for Eberhard Bethge, who was his best friend, confidant and biographer.

The possibility of a gay Bonhoeffer is especially significant because conservatives use him as a role model for government resistance in their opposition to marriage equality.

For a new version of this article, click this link to Qspirit.net:
Dietrich Bonhoeffer and Eberhard Bethge: Anti-Nazi theologians and soulmates

Brave and brilliant, Bonhoeffer is widely acknowledged as one of the most influential theologians of the 20th century. Revered by both the secular Left and the religious Right, he was executed by the Nazis for opposing Hitler. 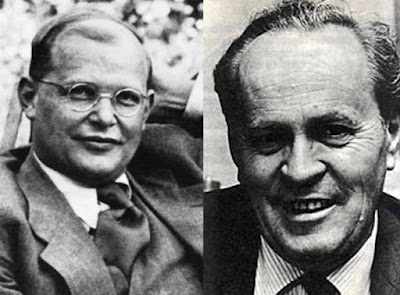 Dietrich Bonhoeffer, left, and Eberhard Bethge
“Bonhoeffer’s relationship with Bethge had always strained toward the achievement of a romantic love” while remaining “ever chaste,” writes religion professor Charles Marsh in “Strange Glory: A Life of Dietrich Bonhoeffer.”

The 2014 biography provides a detailed examination of the love between the two men, who were both theologians in the Nazi resistance. The book cites much evidence of their close friendship: They shared a joint bank account, gave gifts together and sent Christmas cards signed, “Dietrich and Eberhard.” The pair played piano together at all hours, read books aloud to each other, planned elaborate vacations together, attended church together and slept together near the fire. In his will, Bonhoeffer bequeathed Bethge his money, car, music, clothing and books, while granting his female fiance only a memento of her choice from his belongings.

Bonhoeffer never acknowledged his sexual desire for Bethge, so his life may at first appear to be an unlikely source of inspiration for LBGTQ people, but as he himself said, “There is meaning in every journey that is unknown to the traveler.”

His actual theology is complex, inspiring all sides without falling neatly into any of today’s political categories. His work helped motivate liberation movements, including the U.S. Civil Rights movement, the South African anti-Apartheid movement and the anti-communist democratic movement of Eastern Europe.

Bonhoeffer is also popular with evangelical conservatives, who identify with his theology of resisting immoral government. When the U.S. Supreme Court legalized same-sex marriage in 2015, many conservatives called it a “Bonhoeffer moment” that required civil disobedience.

Dietrich Bonhoeffer (Feb. 4, 1906 - April 9, 1945) was born in the Prussian city of Breslau and grew up in a prominent upper middle-class German family of scientists and doctors. They had a humanistic outlook and discouraged him from studying theology, but he did it anyway. His theological education included studying under Reinhold Niebuhr at Union Theological Seminary in New York City, where Bonhoeffer also got involved in the African American church community.

Serving as a Lutheran pastor in Germany between World War I and World War II, he denounced Nazi antisemitism as heresy and called on the church to defend victims of state violence.  (Some still accuse him of expressing the anti-Jewish bias of Christian tradition.)

Eberhard Bethge (Aug. 28, 1909 - March 18, 2000), the slim, gentle son of a minister, was three years younger than Bonhoeffer. He described himself as “a country boy” from the province of Saxony. The two men met and quickly became friends in 1935 when Bethge was a student in Bonhoeffer’s first class at an underground anti-Nazi seminary in a place called Finkenwalde.

“Bonhoeffer also was in love with Eberhard, and wanted in some fashion to secure a spiritual marriage of sorts, and Eberhard could not and did not want to finally accept that,” Marsh explained in an interview with Religion and Politics about his biography “Strange Glory.”

Bethge himself commented on the rumors of his same-sex love affair with Bonhoeffer in comments quoted by Ferdinand Schlingensiepen in the essay “Making Assumptions About Dietrich: How Bonhoeffer was Made Fit for America.” He quotes Bethge’s remarks on a student conference in 1957-58 where he was asked about the intimacy of his correspondence with Bonhoeffer.

“It was felt that the correspondence must have been between homosexuals. Otherwise such an intensive correspondence was hardly imaginable. No, we were all quite ordinary. We know today that no same-sex friendship is without varying degrees of homoeroticism,” Bethge explained.

Their friendship is also detailed, with less speculation about its homoerotic character, in the biography “Daring, Trusting Spirit: Bonhoeffer's Friend Eberhard Bethge” by John W. de Gruchy.  The cover features a rare photo of the two soulmates together. 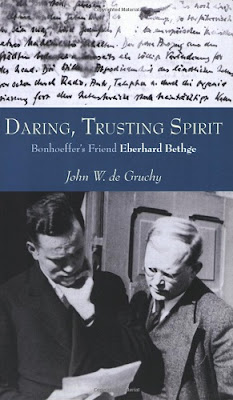 Bonhoeffer and Bethge stand together on the cover of "Daring, Trusting Spirit"
Bonhoeffer did get engaged to a mysterious woman named Maria von Wedemeyer, but scholars such as Marsh dismiss it as an effort to remain close to Bethge, who had just gotten engaged to Bonhoeffer’s niece. His oddly distant relationship with his fiancé is examined in the 2016 book “The Doubled Life of Dietrich Bonhoeffer: Women, Sexuality, and Nazi Germany” by Diane Reynolds.

The Gestapo closed Bonhoeffer's illegal seminary in 1937, the same year that he published his best-known book, “The Cost of Discipleship.” It spells out what it means to follow Christ in the modern world with dangerously immoral government.

The classic book opens with the words, “Cheap grace is the mortal enemy of our church. Our struggle today is for costly grace.” Bonhoeffer’s thoughts on “cheap grace” are eloquent and often quoted. Recent scholarship shows that he borrowed the term “cheap grace” from Adam Clayton Powell, Sr., then-pastor of Abyssinian Baptist Church in Harlem where Bonhoeffer worshipped and taught Sunday school during his studies at Union seminary.

Bonhoeffer practiced what he preached, and his anti-Nazi activities eventually led to his imprisonment. Social justice iconographer Lewis Williams portrays him during the year and a half that he spent in prison.  During that time he wrote many letters to Bethge, including one in which he writes the famous line, "God is the Beyond in our midst." 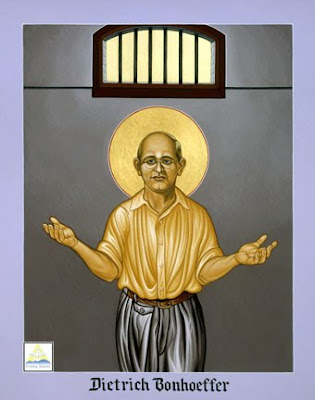 “Dietrich Bonhoeffer” by Lewis Williams
Bonhoeffer was linked with a plot to assassinate Hitler and the Nazis executed him by hanging in the Flossenburg concentration camp on April 9, 1945. He died soon after his 39th birthday, less than a month before the Allies liberated the camp.

Bethge was also imprisoned for his role in the Hitler assassination attempt, but he was rescued by the Soviet army shortly before his trial.

He lived on to spend the next 50 years preserving and promoting Bonhoeffer’s legacy. Bethge collected and edited Bonhoeffer’s “Letters and Papers from Prison” (which were mostly addressed to him) and wrote the definitive biography “Dietrich Bonhoeffer.” His long life included service as a pastor and teacher, and marriage and children with Bonhoeffer’s niece Renate.

Bonhoeffer is honored as a saint, martyr and theologian on the anniversary of his death (April 9) by the Lutheran, Episcopal and Methodist churches. He is one of ten 20th-century martyrs commemorated in statues above the Great West Door at Westminster Abbey in London.

A recent icon of him with a halo was sketched by Tobias Haller, an iconographer, author, composer, and vicar of Saint James Episcopal Church in the Bronx. He uses conte crayon on cardboard with an aluminum foil halo to evoke the unpretentious vigor of the theologian.

The German theologian's story is also told in many books and in films such as “Bonhoeffer: Agent of Grace” and “Bonhoeffer: Memories and Perspectives.”

On Bonhoeffer’s feast day, the Episcopal church offers this prayer:

Gracious God, the Beyond in the midst of our life, you gave grace to your servant Dietrich Bonhoeffer to know and to teach the truth as it is in Jesus Christ, and to bear the cost of following him: Grant that we, strengthened by his teaching and example, may receive your word and embrace its call with an undivided heart.

Bonhoeffer’s own words live on, including these popular quotes whose relevance remains:

“Silence in the face of evil is itself evil: God will not hold us guiltless. Not to speak is to speak. Not to act is to act.”

“We must be ready to allow ourselves to be interrupted by God.”

“We are not to simply bandage the wounds of victims beneath the wheels of injustice, we are to drive a spoke into the wheel itself.”

“To endure the cross is not tragedy; it is the suffering which is the fruit of an exclusive allegiance to Jesus Christ.”

“There is no way to peace along the way to safety. For peace must be dared. It is the great venture.”

Top image: “Dietrich Bonhoeffer” by Tobias Haller
This post is part of the LGBTQ Saints series by Kittredge Cherry. Traditional and alternative saints, people in the Bible, LGBTQ martyrs, authors, theologians, religious leaders, artists, deities and other figures of special interest to lesbian, gay, bisexual and transgender and queer (LGBTQ) people and our allies are covered.

Icons of Dietrich Bonhoeffer and many others are available on cards, plaques, T-shirts, mugs, candles, mugs, and more at Trinity Stores

Thank you for this article. As one who has studied and long admired Bonhoeffer as well as a graduate of Union Theological Seminary in NYC, I found it refreshing and informative. At Union (1979-82)it seemed as if Bonhoeffer, Niebuhr, Tillich, etc. had been there just yesterday.