Day Against Homophobia and Transphobia 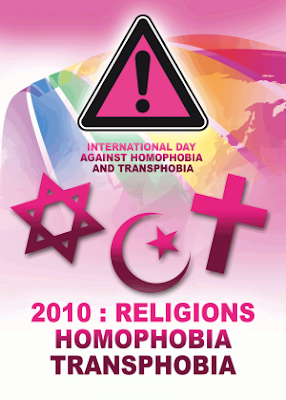 International Day Against Homophobia and Transphobia is today, May 17.

This year the International Day Against Homophobia and Transphobia (IDAHO) campaign focuses on the role of religion in promoting -- or ending -- violence against lesbian, gay, bisexual and transgender people.

We join LGBT people and our allies around the world in calling upon religions to condemn violence and prejudice based on sexual orientation or gender identity, and to create communities of respect for all people. Click here to read and sign the official IDAHO appeal. I signed it on behalf of this blog and JesusInLove.org.

Many IDAHO events are happening around the world, including the Great Global Kiss-In and an arts exhibition in New Caladonia.

May 17 was chosen for IDAHO because the date is the anniversary of the World Health Organization’s May 1990 decision to remove homosexuality from its list of mental disorders. I was shocked when I learned recently that this decision was made only 20 years ago. The American Psychiatric Association removed homosexuality as a disorder in 1973.

I especially want to support the Day Against Homophobia because it is international. I have personal experience with religious homophobia at the international level, so I know how important it is. I confronted it when I worked with the World Council of Churches as ecumenical officer for Metropolitan Community Churches in the 1990s.

I also know how “internationalism” can be used to mask homophobia, because progressive religious leaders don’t want to “offend” the developing nations that they imagine are more prejudiced against LGBT people.

I decided to highlight the international nature of this blog by adding the “Flag Finder.” I’m an American, but as you can see below, only about half of our blog visitors come from the United States. The rest come from all across the globe.

I pledge to make this blog a safe space where everyone is respected. I pray for an end to hatred and violence against GLBT people in every nation. 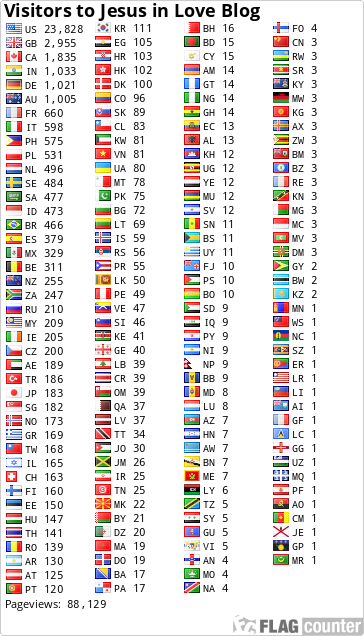 Posted by Kittredge Cherry at 10:59 AM

if i may, i will share in your prayer, kitt.

may the Creator of all open our ears and our hearts and may these words of Jesus Christ be translated into all languages and all paradigms, "if you love your neighbor as yourself you have fulfilled the WHOLE LAW"

much love and hope. pj

Thanks, Kitt! I read a good article in HRC magazine yesterday about the situation in Uganda, and found out their pending death penalty for GLBT persons law was instigated by American fundamentalists who went to Uganda to stir things up. Scary stuff. We just can't have enough prayer is what i always say! And we need it now.

Thanks for supporting IDAHO, Kitt. I'm surprised that there has not been a wider interest in the US. Perhaps it will get more stateside support next year.

I have just come home from a panel discussion on religion and homophobia in which I joined a Muslim women and a Jewish rabbi as one of three lead speakers. Trying to condense a "positive" view on the Christian perspective, in ten minutes, was quite a challenge.

I have posted the prepared text of my contribution at "Queering the Church" (http://queering-the-church.com/blog/?p=8045) (The remarks actually delivered were briefer).

Tomorrow I hope to post some thoughts on the other speakers, and the floor discussion which followed.

Thanks also for stressing the international dimension. Sometimes I get the feeling you Yanks don't realise the rest of the world doesn't exist. It's really good to know that you do.

Great to hear from all of you on this Day Against Homophobia and Transphobia! Amen to PJ’s prayer!

A special welcome to Bill because I think this is your first blog comment here, even though we’ve been email friends for a while. I agree that the situation in Uganda is scary. I assume that it may be one of the reasons that they decided to have a religious focus this year for the IDAHO. When I was dealing with the World Council of Churches, people often tended to lump all of Africa together as a place that was anti-gay, so I also want to say that South Africa has one of the most progressive constitutions, specifically outlawing discrimination based on sexual orientation -- that’s far ahead of the U.S. Constitution.

Terry, your affirmation means a lot to me. I hate to say it, but I’m not too surprised that Americans largely ignored IDAHO. You’re right that many Americans are largely oblivious to world affairs. We just call it “the Web,” when really it’s the WORLDWIDE Web.

I really enjoy international connections, as well as believing in their importance. I also lived abroad (in Japan) for 3 years in my 20s. One reason I wanted to focus on queer art and visual images is because they are a kind of “international language” that doesn’t require words for understanding.

It’s been fascinating to watch the Flag Counter and think about all the different countries where my visitors live. I was surprised to see so few from Australia, and so many from Germany. Terry, your country, Great Britain, was second only to the US in my visitor count. Thanks for being part of that “British invasion.” (That’s how they refer to the popularity of the Beatles here.)

I didn't post yesterday, although I did reference this on my FB page. I'm delighted, though, that my dear friend Bill Murphy DID post. Hopefully, also, you've seen his marvelous review of "Jesus in Love" in our First MCC of Atlanta on-line "News and Notes" for last week.

Bill did send me an advance copy of his wonderful review of my book “Jesus in Love.” But I didn’t know that it was online now. Thanks, Trudie, for the good news.

Here’s a link to the review in case anyone else wants to read it:

Scroll down to find it under the headline “Another Great Read from the First MCC Bookstore.”

I especially like the part about how he can now accept the (historically inaccurate) blond, blue-eyed images if they help others connect with Christ. I've been so focused on alternative Christ images that hadn't thought of it that way before.