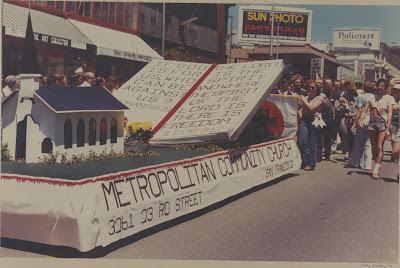 Pioneers of LGBT liberation are shown in this historic photo from the 1974 Gay Freedom Day march in San Francisco.

“The 1974 float is symbolic of MCC San Francisco - marching proud and strong, to ‘We are Not Afraid Anymore’ - as a Phoenix rising out of the ashes after an arson fire destroyed our worship location,” says Lynn Jordan, who submitted this rare photo.

Lynn designed the float with the late Rev. Bruce Hill (third from the right behind the banner). The book on the float presents two scriptures: “If God is for us, who can be against us?” (Romans 8:31) and “The Lord is the spirit, and where the spirit of the Lord is, there is freedom.” (II Corinthians 3:17). The book was made from panels of sheetrock. The parade that year was going down Polk Street - not Market Street.

Arsonists burned MCC’s worship home at Stewart Memorial Church on Guerrero Street, so the float lists their new location at Mission United Presbyterian Church, 3261 - 23rd St., where they worshipped until 1979.

Wood from the annex of the burned church was used to build a cross that was displayed on the float and at MCC-SF worship services for many years..

Posted by Kittredge Cherry at 2:18 PM

This photo is amazing. We have got to document all of this on the Internet, or this history will be lost. Blow the photo up and there is so much to see "Kodak paper film" "Parliament cigarettes" Polk Stree ambiance circa 1974, and wow, they sure knew how to make good MCC floats back then!
Good work!

The first Gay Pride parade I attended was in Atlanta in 1979, and it was christened the "Lavender Anniversary" in honor of the 10th anniversary of Stonewall. In October of that year I was also at the March on Washington. I agree with Turtle Woman -- so many memories, and unfortunately at that point, no digital cameras!

This 1974 float photo does bring back the memories, doesn’t it? I was still in high school in ‘74 -- the year before I met my life partner Audrey. We experienced our first Gay Freedom Day parade together in 1986. We said we were just going to watch, but we couldn’t stay on the sidelines and joyfully joined in when we saw the MCC group. Thank God for the forerunners who built this float!