For a new version of this article, click this link: 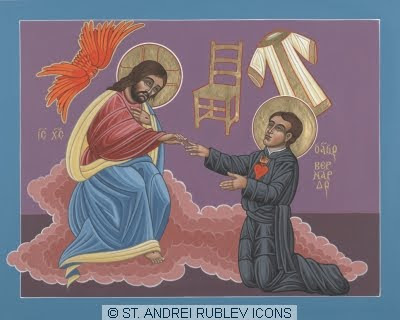 Bernardo (1711-1735) was 18 when he had a vision of marrying Jesus in a ceremony much like a human wedding. He described it this way:

Always holding my right hand, the Lord had me occupy the empty throne; then He fitted on my finger a gold ring.... “May this ring be an earnest of our love. You are Mine, and I am yours. You may call yourself and sign Bernardo de Jesus, thus, as I said to my spouse, Santa Teresa, you are Bernardo de Jesus and I am Jesus de Bernardo. My honor is yours; your honor is Mine. Consider My glory that of your Spouse; I will consider yours, that of My spouse. All Mine is yours, and all yours is Mine. What I am by nature you share by grace. You and I are one!”
(quoted from “The Visions of Bernard Francis De Hoyos, S.J.

“I was so taken with this profoundly beautiful account of Jesus’ mystical marriage with Bernardo, including all the symbols of a human wedding,” McNichols wrote.

Official Roman Catholic accounts emphasize how Bernardo went on to become “the first apostle of the Sacred Heart of Jesus in Spain,” but the church downplays the queer vision that inspired him. Bernardo’s marriage with Christ can justifiably be interpreted as a “gay Jesus” story.

Bernardo spent nine years in the Jesuit formation process and was ordained in January 1735. His pastoral ministry was cut short later that same year when he died of typhus on Nov. 29, 1735. Some call him a “boy saint” because he only lived to be 24. His dying words indicate that he felt the presence of his Spouse Jesus at the end. Bernardo’s last words were, “Oh, how good it is to dwell in the Heart of Jesus!”

After his death Bernardo’s reputation for holiness continued to grow, but church politics slowed his path to sainthood until recently. His beatification ceremony was held in April 2010 in the northwestern Spanish province of Valladolid, where Bernardo spent his entire life.

While the Catholic church refuses to bless same-sex marriages, the lives and visions of its own saints tell a far different story -- in which Christ the Bridegroom gladly joins himself in marriage with a man.

___
This article is available in Spanish at:

It is also part of the Queer Christ series series by Kittredge Cherry at the Jesus in Love Blog. The series gathers together visions of the queer Christ as presented by artists, writers, theologians and others.

That isn't rare, many mystics had such visions, both men and women, and a lot has been written about the idea of Christ as the bridegroom and the Church, as well as individual believers, as the bride - and this symbolism comes from the Bible, of course. The problem with the church is twofold in this context, I think: for one thing, it considers the biological, provreative aspect of relationships to be crucial rather than their call to reflect and strenghten the relationship with God, and for another, it teaches that the marriage with Christ is spiritual and therefore it cannot be invoked as an argument for inclusion of all confugurations of sexes in relationships on the one hand, and on the othar says that women can't be priests because they cannot have "the special bond with Christ" (as a bishop put it once) - and there the sex of Christ becomes real and counting...

Back to the topic, however. A few days ago I listened to one of Bach's Cantatas ('Ich geh' und suche mit Verlangen') which beatufully, both in words and music, speaks about "the marriage of the Lamb": here you can find the English lyrics http://www.uvm.edu/~classics/faculty/bach/BWV49.html, and here a rendition of the main aria: http://www.youtube.com/watch?v=aZnCqnikq4s&feature=related. Although the part of the soul was written for a women, it obviously refers to each and every human being.
Ich geh und suche mit Verlangen (Dialogus)
www.uvm.edu
I go and search for thee with longing, Thee, O my doveling,(1) fairest bride. Tell me, where art thou left and gone now That thee my eye no more can find?

Thanks, Łukasz, for these beautiful expressions of the mystical marriage! Some of the lyrics remind me of the Song of Songs in the Bible. You’re right that many mystics envisioned mystical marriage with Christ. I think that artist-priest Father Bill McNichols found Bernardo’s vision to be unique because it included a very specific wedding ceremony with a gold ring. I like your analysis of the church’s problems in applying these visions to contemporary issues of same-sex marriage and women priests.

I am signed up for Chris Glaser's course on "Sexuality and Christianity" being offered through UFMCC, which starts this Saturday. As a result, I find this post extremely relevant.

I have now posted a fuller description of my own experience (which I referred to in an earlier comment) at Queering the Church: "My Experience as “The Bridegroom of Christ”"

Trudie, how did the Chris Glaser course go? I would love to hear what you learned about sexuality and Christianity.

Terry, thank you for sharing your own powerful, beautiful experience with Christ the Bridegroom. The world needs to hear these stories of love. These experiences may be rare -- but not as rare as I once thought. It seems that people tend to keep these kinds of visions to themselves, for obvious reasons. But saints, mystics and others before us have known the joys and burdens of being a spouse of Christ.

There are many Catholic saints and mystics who experienced a similar form of "mystical marriage", so called because of an intense spiritual union, arrived at only after much effort, and with a lot of grace.

There are no homosexual connotations. God loves souls.

Indeed there are many mystical marriages -- some envisioned as same-sex marriages and some as heterosexual marriages. We are free to draw our own conclusions about their implications for today’s same-sex couples.