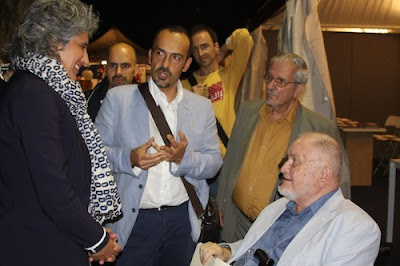 John McNeill and his partner Charles Chiarelli meet Paola Concia, member of the Italian Parliament, at the June 6 premiere. Andrea Rubera translates.  Photo By Bill Wilson © 2011, photojournalist for SanFranciscoSentinel.com
Rain couldn’t dampen the spirit of the crowd that joined pioneering gay priest John McNeill at the world premiere of a film on his life at EuroPride in Rome June 6.

(Update: Click here for info on the U.S. premiere Sept. 24 in Woodstock, NY.)

Rain forced organizers to move the premiere of “Taking a Chance on God” from an outdoor location to a tented site in Europride Park at Rome’s Piazza Vittorio Emanuele, according to a news report in the San Francisco Sentinel.

Andrea Rubera, president of Nuova Proposta: Christian Homosexual Women and Men, and Paolo Patane, president of Arcigay, introduced and welcomed McNeill. They praised his courage in coming out and promoting LGBT rights in the church and society since the 1970s. McNeill’s work inspired queer people all over the world, but he was silenced by the Roman Catholic Church and expelled from the Jesuit order for expressing God’s love for LGBT people.

McNeill himself spoke before the screening of the documentary, which was directed by Brendan Fay. Diane Xuereb of Malta posted a moving first-person account on her blog “I am Gay and I am BLESSED.” Here are a few highlights:

I thought that I would get there to find that it was all over, however in true Italian fashion (practically always late ;)) it had only just started. It was 10.45pm. I arrived just in time to hear Fr. John introduce himself as well as the documentary.

The tent was packed, all the chairs were taken, there was barely a place to stand and everyone was listening attentively. Listening to this charismatic 85 year old legendary, gay Jesuit priest, hanging on to his every word….

While in Rome, McNeill will also advocate for LGBT justice at the Vatican -- leading to a possible showdown with his longtime opponent, who now serves as Pope. The order to silence McNeill for his LGBT activism was issued in Rome in 1977 by Cardinal Joseph Ratzinger, the current Pope Benedict XVI.  McNeill’s landmark 1976 book,  “The Church and the Homosexual

,” had just been published.

Now McNeill plans to deliver a letter to the Vatican urging the Church to speak out against violence and discrimination experienced by lesbian, gay, bisexual and transgender (LGBT) people around the world.

Simply delivering the pro-LGBT letter to the Vatican may prove to be a challenge, but as the saying goes, Rome wasn’t built (or unbuilt!) in a day.

(Update on June 15: Click here for photos and a report on McNeill and LGBT groups presenting the letter to the Pope asking him to end homophobia.) 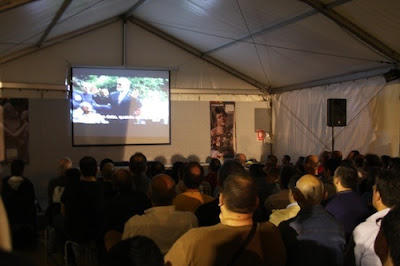 Crowd watches the world premiere of “Taking a Chance on God” at EuroPride in Rome on June 6
Photo By Bill Wilson © 201l
___
Special thanks to Bill Wilson for permission to post his photos of the premiere. See lots more photos at:
billwilsonphotos.com

For more info, go to:
UPDATE on Oct. 16:
John McNeill has posted his own personal thoughts on the U.S. film debut at this link:
Reflections on the playing of Taking a Chance on God at the Woodstock Film Festival

NEW on June 15: LGBT Christians to Pope: Stop homophobia! (plus photos of EuroPride &  John McNeill) at the Jesus in Love Blog

Taking a Chance on God at Europride Premiere - On Scene with Bill Wilson at SanFranciscoSentinel.com

Posted by Kittredge Cherry at 12:30 PM