Nasty accusations of blasphemy poured in today after some conservative bloggers discovered the gay and lesbian Nativity scenes that I created.

All because I put Mary with Mary and Joseph with Joseph -- like putting two brides or two grooms on top of a wedding cake! I made a video of my alternative manger scenes, asking the question, “What if the child of God was born to a lesbian couple… or a gay couple? Because, after all, LOVE makes a family. Including the Holy Family.”

I created the video way back in 2009, but today it’s hot news on some conservative blogs. They use religious language to justify hate and discrimination against LGBT people, even though Jesus taught love for all.

Here are some highlights -- or low points:

“Я U READY FOR THE LESBIAN NATIVITY SCENE?

What would lesbians have to do with the manger scene? Sadly, the more you make a study of the godless pro-gay lobby now well within the visible church you quickly find that nothing’s sacred to such as these. … So the time has now arrived to take up your Sword of the Spirit and go out to meet them full on.”

“GOD HAS 2 MOMMIES
Jesus, Mary and ... Josephine? It's lesbian Nativity at church
'A slap in the face to the Holy Family and Christians around the world'

“That event inspired Kittredge Cherry, who calls herself a lesbian Christian author and minister from Los Angeles, to pick up the mantle and create in December 2009 her own non-living "gay" Nativities she continues to promote on YouTube.”

Most of the hateful comments were posted at YouTube. Click here to go to the YouTube page where they are posted. Instead of deleting them, I’m leaving them there as evidence.

For more about lesbian and gay Nativity scenes, see my related posts: 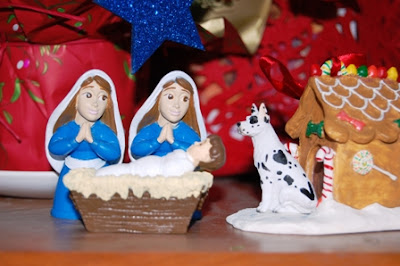 Posted by Kittredge Cherry at 6:36 PM

As hard as those comments are to read, I applaud you for this project and for leaving those comments there. The darkness hates the light. Just keep letting your light shine. There are hundreds of thousands of us who are standing in line, ready to relight it when they try to blow it out.

How truly horrible that ANYONE who claims the name "Christian" should assert that LOVE is not a criterion (for making a family or anything else)! It is said over and over again by Jesus himself: LOVE IS THE ONLY CRITERION! This is, of course, what is wrong with our entire culture; love has been replaced by judmentalism and hatred. A loving family of two women or two men (or even a caring single parent) provides a far better environment for the spiritual and physical growth of any child than the cold and vicious situation of a dominant, brutal and abusive situation which unfortunately is all too common in the "traditional" one-man-one-woman family of our times.

Wow, it is sad indeed that people would actually refuse that Love is what makes a family. Wow. Kitt, I think these kinds of comments and harassment is telling of 1) the importance of your work and 2)reflective of other people's shame around their own limited understanding of the Divine. That kind of attack and hate comes from some place inside them that is deep, hidden, and broken...a place of shame.

Your work is beautiful and I am grateful for it!

Now words of support are pouring in here, on YouTube and on my Facebook page! Thank God for those who remember Jesus' commandment, Love one another!

I thought I had hardened my heart so that insults from the conservatives couldn’t hurt me… but tears are coming to my eyes as I read the words of support from so many people.

"Love..is NOT the criteria for making a "Family." That *may* be the most shocking statement I have ever read in my entire life---and I'm black, same gender loving and grew up in The American South. So that's takes some doing, baby!

Continue your beautiful work, Dear One!

Go gal - and don't worry about the Cons - just love them, as Jesus commanded us.
Much love, Graham.

Oh Kitt, Mazel tov! What a blessing to know you've done something important enough and powerful enough to draw such attention and fire! Not everyone can do that you know. Mega, mega congrats on your achievement!!

Every one of your comments makes me smile! Sage, thanks for sharing your black, same gender loving perspective. I enjoyed the comment you left it YouTube as “werewolfbiker” -- and that nickname gives me a hint of an intriguing side of you that I haven't seen until now.

CJ, your enthusiasm is great! I hadn't thought about how not everyone has the "gift" of being able to upset conservatives. This seems to be a natural ability of mine. I tends to happen without me even trying. Anyway, as Graham says, I won’t “worry about the Cons.”
and

Yes, there are many sides to the sage. Werewolfbiker refers to two things:

1. I have been a biker (as opposed to being a motorcycle enthusiast) for nearly 20 years. I have owned 5 Harley's and a coupla European sportbikes. And have been in biker clubs for years.

2. I am a lifetime member of my current motorcycle club that has the name "wolf" in its name.

On my facebook page there is a picture of me in my club colors sitting on one of my "hogs" in the profile pics.