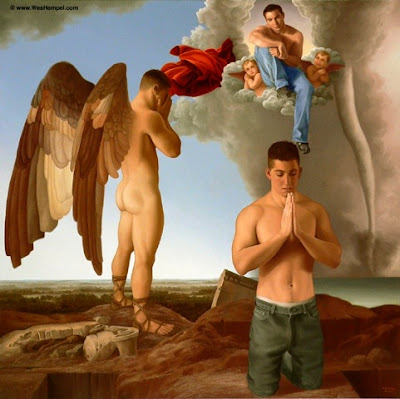 “A New Beginning” by Wes Hempel
Is that a gay angel weeping? Gay spiritual struggles are suggested in the paintings of Wes Hempel, whose art helps LGBT people find our missing place in history.

The Colorado artist creates a sense of mystery by combining contemporary figures with historical elements, using the polished, realistic style of the past. His projects include “a re-visioning of what art history might have looked like had homosexuality not been vilified.”

Some of Hempel’s paintings address the clash between contemporary gay identity and religious tradition. Others imply gay experiences of sublime awe through nature, sexuality and, by extension, the One who created it all. The beauty of his style and subject matter reflects the holiness of human nature.

An excellent example is “A New Beginning” (above), which shows a young man kneeling in prayer while a nude angel weeps and a handsome man watches from heavenly clouds above. Hempel’s own statement on the painting raises more questions that it answers:

“It’s not clear what prayer is being offered by the kneeling youth, though in conjunction with the title, we might assume he desires a fresh start of some kind, a break with the past (represented by the recently excavated antiquities), forgiveness, perhaps, renewal. Other elements in the painting may hint that realizing such a change will not be easy. Is the angel standing beside the youth weeping? If so, are these tears of joy or dismay? The figure perched in the clouds -- ostensibly a representative of heaven -- looks down not at the praying youth, but rather off to the side. Is his expression one of concern? Compassion? Sadness? The tornado, literally a collision of opposing air masses, churns ominously in the background.”

Another mysterious gay encounter occurs in “Supplication” (below). Two idealized men interact, or purposely fail to interact, among the clouds in a setting that suggests heaven or antiquity. Supplication is a form of prayer, but is the supplicant begging a favor from another man -- or from a Christ figure? Is he asking to have his homoerotic desires fulfilled or removed? Are they lover and beloved, human and God, or two faces of the exact same man?

“Supplication” by Wes Hempel
Like a painter from the 19th century, Hempel sometimes uses nature as a metaphor for the divine. Two shirtless men cling together as they stagger through scenery of almost overwhelming majesty in “Rescue from the Sublime” (below).


“I was thinking how the beauty of the world can be overpowering at times, and how we need help from each other in enduring it. I remember reading about people in the nineteenth century who were "soul struck" by scenic beauty, peaceful rivers, majestic mountains, etc. and would literally swoon. Imagine!

“And, of course, there's the larger metaphor that comes into play about the face of God and peering into the divine. Sometimes we need to be rescued from God. It’s a paradox, because we can’t not approach. We have to look and ask the questions, but we need each other's support in doing so. We have to rest in each other's arms ...”

Hempel puts a queer eye on art history in some of his earlier work. He replaces female sex objects with men in his queer versions of famous paintings. For example, Jean-Leon Gerome’s 1884 painting “Slave Auction” shows men bidding to buy a nude white woman. Hempel’s version, titled “Auction,” has a rope-bound male angel, genitals exposed, as the enslaved object of desire. This painting and many more can be seen at the artist’s website, weshempel.com. (Warning: nudity.)

Sometimes Hempel works on joint art projects with his longtime partner Jack Balas. A detailed interview about their collaboration in life and art is posted at Philip F. Clark’s blog Artpoint.
___
Special thanks to Toby Johnson for alerting me to the art of Wes Hempel in connection with the forthcoming novel “King of Angels” by Perry Brass.

Posted by Kittredge Cherry at 9:54 AM

Thank you for this post. I can relate so much with those paintings.

LOVE Wes Hempel's work. Again, thanks for sharing it!

As soon as I saw Wes Hempel’s work, I wanted to share it through Jesus in Love. Thanks, Christopher and Trudie, for letting me know that his art speaks to you too. The artist emailed me today to say that he is very happy with the presentation on my blog. I look forward to seeing what he will paint next.

This is a beautiful presentation of Wes's extraordinary work. I am so happy that there is another out there who understands the heart of his art. Thank you Kitt!

Thanks for reminding me to check back into Wes Hempel's Website. Love these magnificent paintings about gay male spirituality and the history of Christian Art.

Thanks Graham, John, and Philip. It's especially exciting to get positive feedback from others who have blogged about Wes Hempel.

At first glance this work has struck me as being stunning. I am in something of a rush and don't have the time to spend with the artwork nor the accompanying article. So, I'll be back...