ML King memorial and the gay hero of the March on Washington: Bayard Rustin 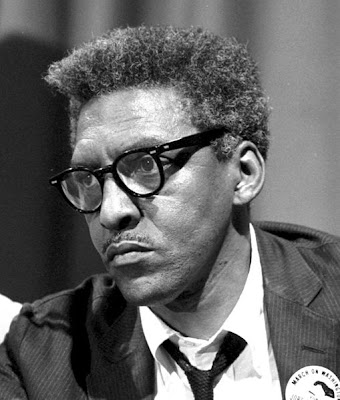 The memorial, with a 30-foot statue of King, is scheduled for dedication on Washington’s National Mall on Sunday, Aug. 28, 2011. (Update: The dedication was postponed to an undetermined date in September or October due to Hurricane Irene.)

A close advisor to King, Rustin was the chief organizer of the March on Washington, where King gave his famous “I Have a Dream” speech. Rustin has been called “an invisible LGBT hero.” His name is almost unknown, even though he was a major leader in the movements for civil rights and non-violence. He was openly gay, so stayed behind the scenes. He died 24 years ago today at age 75.

Rustin (Mar.17, 1912 - Aug. 24, 1987) rarely served as a public spokesperson for civil rights because he was openly gay in an era when homosexuality was criminalized and stigmatized. His sexuality was criticized by both segregationists and some fellow pacifists and civil-rights workers. In the 1970s he began to advocate publicly for lesbian and gay causes.

From 1955-68 Rustin was a leading strategist for the African American civil rights movement. He is credited with introducing Gandhi-style non-violence to the civil rights movement. His decades of achievements include helping launch the first Freedom Rides in 1947, when civil disobedience was used against racial segregation on buses. He helped organize the Southern Christian Leadership Conference and much more.

Rustin’s sexual orientation became publicly known in 1953, when he was arrested for homosexual activity in Pasadena, California. He pleaded guilty and served 60 days in jail. A member of the Quaker faith with its pacifist tradition, he had been jailed before for refusing to participate in World War II.

He clearly saw the connections between the movements for racial justice, women’s equality and LGBT rights. He made it vividly clear in a controversial speech to the Philadelphia chapter of Black and White Men Together on March 1, 1986. The speech, titled “The New ‘Niggers’ are Gays,” is one of several pieces about LGBT rights in his book “Time on Two Crosses: The Collected Writing of Bayard Rustin.” Rustin states:

“Today, blacks are no longer the litmus paper or the barometer of social change. Blacks are in every segment of society and there are laws that help to protect them from racial discrimination. The new “niggers” are gays. … It is in this sense that gay people are the new barometer for social change. … The question of social change should be framed with the most vulnerable group in mind: gay people.”

The full synthesis of Rustin’s black and gay identities -- the “two crosses” of his book title -- was the culmination of a life well lived. He died less than a year later of a ruptured pancreas on Aug. 24, 1987 -- 24 years ago today. Late August was also significant in Rustin’s life because the March on Washington was held on Aug. 28, 1963.

The new King memorial includes 24 niches honoring others who gave their lives in various ways to the civil rights movement. I wasn’t able to find out if Rustin will be officially honored there. Some niches have been left open and incomplete, so that more individuals can be added in the future.

Rustin deserves a place in the King memorial… and in the LGBT saints series here at the Jesus in Love Blog.

_________
This post is part of the GLBT Saints series by Kittredge Cherry at the Jesus in Love Blog. Saints, martyrs, mystics, heroes, holy people, deities and religious figures of special interest to gay, lesbian, bisexual and transgender (GLBT) and queer people and our allies are covered on appropriate dates throughout the year.

Posted by Kittredge Cherry at 6:23 PM

This is the time to lobby for Mr. Rustin to be included in one of those "niches" within the Martin Luthter King memorial in Washington, D.C. A genius of the civil rights movement, he is a true hero to us all!!

And also, I'd like to add the black women of Montgomery, Alabama who organized the bus boycotte. No men don't organize car pooling for hundreds, women do this!!! MLK gets the credit but black women and gay black men need to be honored as the backbone and the originators.

You’re right that there are other unsung heroes behind MLK, Turtle Woman. So far I only know that niches will be devoted to Medgar Evers and the four girls murdered in the 16th Street Baptist Church bombing in Birmingham. I imagine Rosa Parks may have a place there. I **hope** that Bayard is already included, but we shall see… and we shall overcome.

Rustin has been a personal hero of mine for many years (check out the "People Who Inspire You" section on my fb page) so I'm especially glad that you're remembering him today and this weekend. It takes people behind the scenes, doing the long slow drudge that lays the ground work for change, to make it possible for the stars of any movement to shine. MLK inspired millions, and that's no small thing, of course, but living openly in a way that would raise the ire of millions if they knew, while simultaneously producing the strategies that eventually win out isn't exactly chopped liver either. Rustin certainly deserves to be much better known and more widely honored and than he is- especially by the lgbt community. Thanks for doing it here.

I certainly add my enthusiastic "Amen" to the comments of Turtle Woman and CJ. Somewhere in the back of my recollection, I believe I heard my dad Ted, who died in 1990, talking about Bayard Rustin in a very positive and admiring tone. After reading this excellent memorial, I understand why!

Kitt, Thank you for this wonderful piece! A while back I saw a PBS documentary about Mr. Rustin, and I thought it was very well done. I had thought before that I knew something about him, but after watching this film, I realized I had known almost nothing! He is also a great inspiration to me, and I hope he will get the much wider recognition that he deserves.

Dedication of the King memorial was postponed due to Hurricane Irene. It won’t happen until September or October. So we will have another occasion to reflect on the contributions of the great civil rights leaders and those who worked behind the scenes to make it all possible.

I’ve enjoyed hearing from some of the many people who admire Bayard Rusin, including the latest comments from CJ, Trudie and Sandi.

Trudie, I’m glad to know that your father was so insightful and tuned in to the civil rights movement, in addition to being a wonderful artist. Sandi, I’d love to see that documentary on Rustin. I looked it up and it’s called “Brother Outsider.”

CJ, that’s cool that Rustin is on your FB page. Rustin did even more than “the long slow drudge that lays the ground work for change.” He had the ideas that laid the groundwork too. I’m adding a new link to the main post to his website, Rustin.org. There Walter Naegle, Rustin’s lover until his death, writes about Rustin’s contributions, including this:

“In February 1956, when Bayard Rustin arrived in Montgomery to assist with the nascent bus boycott, Martin Luther King, Jr. had not personally embraced nonviolence. In fact, there were guns inside King’s house, and armed guards posted at his doors. Rustin persuaded boycott leaders to adopt complete nonviolence, teaching them Gandhian nonviolent direct protest.”

I am so pleased to read that Bayard Rustin is at last getting some well deserved recognition.