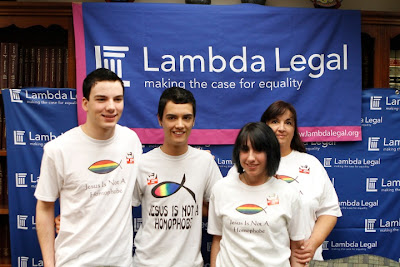 Maverick Couch, second from left, with his mother, Tonya, and his friends Josh and Taylor at his April 3 press conference in Cincinnati (photo from Lambda Legal)
A gay teen in a T-shirt that says, “Jesus is not a homophobe” is among those taking a stand for LGBT youth today on the Day of Silence.

Today is the Day of Silence, a national student-led protest of anti-LGBT bullying in schools. On April 20 students from middle school through college take a vow of silence to emphasize the silencing effect of anti-LGBT harassment. During their silence, students explain their message with printed cards, buttons, stickers, T-shirts and such.

Today’s silent protestors include Maverick Couch, a 16-year-old gay Ohio student who won a legal fight this month for the right to wear a T-shirt that says: “Jesus was not a homophobe.”

Couch wore the shirt to his high school in Waynesville, Ohio, for the Day of Silence in 2011. The school principal ordered him to turn the shirt inside out because it “had to do with religion” and “religion and state have to be separate.” Later the school district defended the action by denouncing the shirt’s message as “sexual in nature and therefore indecent and inappropriate in a school setting.” 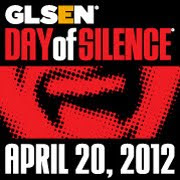 On April 3 Lambda Legal filed suit against the Wayne Local School District on Maverick’s behalf, arguing that they violated Couch’s First Amendment right to free speech. The very next day a federal judge ruled that Couch can wear his T-shirt while the case proceeds -- but only on the Day of Silence.

Couch’s experience shows the power of combining LGBT and Christian messages. I have done so many projects about the queer Christ that it almost seems tame to wear a T-shirt saying “Jesus is not a homophobe.” But it sure made an impact!

Jesus himself never said anything directly about homosexuality in the Bible, but he often encouraged love for all, including outcasts and enemies. Surely he would agree that he is “not a homophobe.”

The Day of Silence feels like great progress to me when I remember my own high school years in the 1970s.  Back then every day was a type of  “day of silence” in which we queer kids were afraid to identify ourselves.

Founded in 1996, the Day of Silence is sponsored by the Gay, Lesbian and Straight Education Network (GLSEN). The first Day of Silence was organized at the University of Virginia in response to a class assignment on non-violent protest. More than 8,000 schools have participated in the event, which is held every year in April.
___
Related links:

Maverick Couch, Gay High School Student, Sues School Over Ban Of His 'Jesus Is Not A Homophobe' T-Shirt (Huffington Post)

Jesus is Not a Homophobe by wesdesd
Print your own t shirt on zazzle.

Posted by Kittredge Cherry at 12:16 AM

Maverick's the man! What a fabulous name to have - and good for him for standing his ground - proving that America can be the land of the free when it tries.

Yes, Maverick is definitely living up to his name. Lambda Legal is running a signature campaign now for his lawsuit called “Be a Real Maverick: Stand Up for Equality.” I speak as someone who also has an unusual name. “Kittredge” has been handed down through the women in my family.