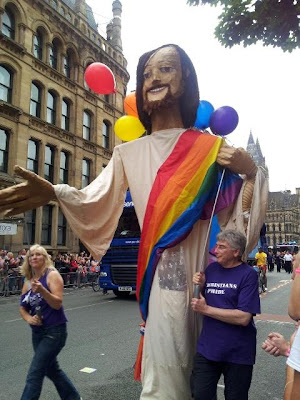 The larger-than-life queer Christ puppet was created to express God's love for LGBT people  Proud Jesus also appeared this summer at Liverpool Pride, where he made a big impression on gay artist Tony O’Connell.

“I was delighted to see Jesus at Pride this year,” O’Connell said. “Every year a group of aggressive fundamentalists come to stand at the side, heavily guarded by police and raising the expensive policing bill. Usually the march slows down and a deep booing and jeering can be heard. This year the march slowed and we could see this Jesus stop, bless them and blow them kisses. It was the highlight of the day.”

The proud Jesus, measuring 12 feet tall, was created by Liberty Church, an inclusive church that celebrates the diversity of LGBT people in Blackpool, England. He won the award for "best community entry" in the parade.  A church news release explains more:

“Where would Jesus be if he was on Earth? Liberty Church in Blackpool believes he would be at Gay Pride dancing, waving and laughing his way through our cities as he embraces the gay community. So that’s exactly what they created with a 4 metre high Jesus this year.

He was inspired by a gay man that Nina Parker from Liberty Church met during Pride 2011. He questioned how it was possible to be gay and Christian when he had experienced such hurtful homophobia from Christians. Nina realised that if Jesus walked our streets today he would be found at Pride, that he was always with people on the edges of society, and usually at the party. So, Big Jesus was created as a symbol of God’s desire, to communicate with, and love the LGBT communities.”

___
This post is part of the Queer Christ series by Kittredge Cherry at the Jesus in Love Blog. The series gathers together visions of the queer Christ as presented by artists, writers, theologians and others. More queer Christ images are compiled in my book Art That Dares: Gay Jesus, Woman Christ, and More

Copyright © Kittredge Cherry. All rights reserved.
http://www.jesusinlove.blogspot.com/
Jesus in Love Blog on LGBT spirituality and the arts
Posted by Kittredge Cherry at 8:06 AM

Tacky beyond belief. This does nothing for the Christian queer community except belittle Jesus.

I’m sorry you feel that way, Brother Graham. I don’t usually publish short negative comments like this, but I am posting yours because you have frequently left thoughtful positive comments in the past. Many people felt blessed by the Big Jesus marching in the Pride parades. Maybe it depends on the perspective of the person witnessing it. I have the impression that you already know Christ and his love for you, but many LGBT people can’t see this until they experience something like the Big Jesus marching with them, bringing love and peace. Of course no image can do justice to the fullness of Christ.

We used your picture and gave disclaimer that it's you said no way meant that your group was agreeing with what was said in our article. Feel free to check it out at the link above.
You will find it in English, Tagalog, Bisayan, Spanish and Swahili there. By the way, you are welcome to join us there for further inspiration. Jesus loves us all. 🏳️‍🌈 If there is anything he desires for you to change, he will have Holy Spirit speak to you about it and then, and only then should you make that change. Until then, live blessed under his anointing. Amen 🏳️‍🌈

Happy Pride Month in Christ to one and all.🏳️‍🌈