The Bible and Gays: Is it a sin to be gay? Did Jesus condemn homosexuality? 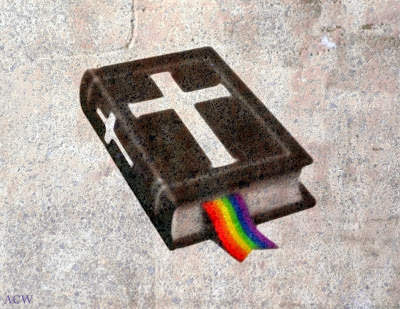 “Bible with Awareness (Beibl gydag ymwybyddiaeth)” by Andrew Craig Williams
When readers send me anti-LGBT hate mail, I often refer them to “The Bible and Gays” by Rev. Durrell Watkins, pastor of Sunshine Cathedral in Fort Lauderdale, Florida.

It is one of the all-time best articles on the Bible and homosexuality. Rev. Watkins goes well beyond debunking the anti-gay “clobber” passages to present Christ’s positive message about queer people in a clear, accessible way. I am pleased to share his article here today.


The Bible and Gays
By Rev. Durrell Watkins
There are four questions I am most often asked about spirituality in relation to LBGT people. My ministry is within a church that is rooted both within the Christian tradition and the Gay Rights movement. However, I am a spiritual humanist and a religious pluralist and while I speak from a primarily Christian viewpoint, the message that I try to offer is universal. Here are the questions and my answers.

Is it a sin to be gay?
“Sin” means to miss the mark (an archery metaphor). To “be” anything is a matter of ontology (of “is-ness”). So to discover that one is something and to be honest about it can never be missing the mark. Self-discovery and expressing one’s truth with integrity is hitting the bull’s eye!

Did Jesus condemn homosexuality?
Jesus condemned precious little. One of the few things that he did condemn was the tendency of religious people to participate in condemnation! Jesus seemed to have a great deal of patience with almost everything other than self-righteous people who tried to enforce religious rules in a way to oppress or control others.

Was Jesus ever sympathetic to homosexual persons?
The word “homosexual” would not have been part of Jesus’ vocabulary. However, in the 8th chapter of Matthew’s gospel (and the story is repeated in the 7th chapter of Luke’s gospel) Jesus is said to have healed a centurion’s servant. The original hearers of that story would have assumed that the servant was the centurion’s lover. From what we know of 1st century Roman culture, we know that such relationships were not uncommon. And for a person of such high rank to be so concerned about a servant that he would approach a faith healer of lower status in a desperate attempt to help his servant suggests an intimacy far greater than one would expect between a military officer and his “servant.” How did Jesus respond to the centurion? He praised his faith! His relationship was not condemned or even questioned.

Also, in Matthew 19, Jesus defines “eunuchs” in a much broader sense than we normally hear. He says that, there are those who are castrated, which is the usual definition. But he also says there are 2 other kinds of eunuchs. He says some “choose” to be eunuchs (living a life of celibacy) and that others are “born” eunuchs (people who by nature are sexually different). He also says that not everyone would accept his broad, inclusive, and non-judgmental definition of eunuchs, but he says, “whoever can accept this ought to accept it.”

Jesus was giving an example of sexual diversity -- some are different because they’ve been surgically altered. Others are different because of personal choices to not marry or to remain celibate (e.g. monks and nuns). And still others are different because they are born different, that is, they are innately different. Jesus did not suggest that anything was wrong with any of the eunuchs, and he certainly did not propose an “ex-eunuch” program. Some of us are “different” from the majority, and Jesus seemed to think that was OK and that everyone who can accept such diversity needs to accept it! His teaching reminds us of Isaiah 56 where the prophet places these words in the mouth of God, “The eunuch need not say, ‘I am a dry (barren) tree’…I will give them in my house a monument and name which will be even better than having children; an eternal, imperishable name…For my house shall be called a house of prayer for ALL peoples.” In any case, Jesus never condemned same-sex love or attraction.


But aren’t there bible verses that do condemn homosexuality?
It depends on how you read the bible. The people who wrote the documents that in time became our bible were products of their time and culture. They had specific agendas and were writing to particular communities, usually in response to definite events. None of them had any idea that 21st century Americans would be reading their work. In fact, none of them knew there was a North American continent or that the world wasn’t flat. And so, we do read statements in the bible that support slavery, that assume women are in some way inferior to men, that seem to suggest God takes sides in bloody military conflicts.

Today, we do NOT accept that women are in any way inferior to men.
Today, we believe slavery to be one of the greatest evils of human history.
Today, many of us believe that war is almost never the will of God.

Out of the entire bible written by many people covering a period of more than a thousand years, there are only about half a dozen sentences that are routinely used to shame, condemn, harass, or terrorize gay and lesbian people! Each of those rare, isolated passages, when taken in their cultural, historical, linguistic, and literary contexts can be deconstructed in ways that are actually quite liberating for same-gender loving people! Love and even mutual attraction are never condemned in scripture.

The bible is against rape, exploitation, and harming your neighbor (and rightly so!). It is not a collection of books meant to condemn love, mutuality, or any life-affirming situation.

Now, reflect on these passages from the bible that some of us believe accurately sum up the divine message for the human family: “God is love and WHOEVER lives in love lives in God and God lives in them!” – 1 John 4.16; “For I know well the plans I have in mind for you, says the Eternal, plans for your welfare, not for woe! plans to give you a future full of hope.” – Jeremiah 29.11; “By the grace of God I am what I am.” – 1 Corinthians 15.10; “The fruit of the Spirit is love, joy, peace, patience, kindness, generosity, faithfulness, gentleness, self-control. Against such there is no law.” – Galatians 5.22-23.

There is no law against love and we are all one. This is the message of the bible. It doesn’t tell us who to hate; it tells us how to love. We can be sure that LBTG people are as capable of living love-filled lives as anyone else
___
Rev. Durrell Watkins has been the senior pastor of Sunshine Cathedral in Fort Lauderdale, Florida since 2007. The church is affiliated with Metropolitan Community Churches and the International New Thought Alliance. Watkins has a Doctor of Ministry degree from the Episcopal Divinity School in Cambridge, Massachusetts. This article originally appeared at his blog Kweerspirit.

A Spanish translation of this article is online at the Santos Queer blog:

___
More resources on the Bible and homosexuality:

“What the Bible Really Says about Homosexuality” by Daniel Helminiak

“Jesus, the Bible, and Homosexuality” by Jack Rogers

The Gay Debate: The Bible and Homosexuality by Matthew Vines (with translations in 10 langauges)

Homosexuality and the Bible at GayChurch.org

“From Sin to Amazing Grace: Discovering the Queer Christ” by Patrick S. Cheng

Posted by Kittredge Cherry at 10:01 AM

Another resource which has very good coverage of the Bible and homosexuality is the Gay and Christian website (www.gaysandslaves.com). Unlike Rev. Watkins’ article, this site doesn’t ignore the implications of the “clobber verses”. It accepts that these verses condemn penetrative sex between men and sex between women, but shows why this condemnation doesn’t apply to gay and lesbian people today.

Gaysandslaves.com is another great resource on the Bible and homosexuality. How did I forget to include it?! I'm sorry for the oversight, Colin. But I have already added it into the resource list at the end of this article. And here is a live link that anyone can click to visit the Gay and Christian website:

Great article and resources! Thank you--
But I think it is also important not to live as if LGBT have to be armed with a defense as if we need or are our own defense attorneys in a court trying to prove us "guilty" of being gay. We are blessed to be who we are-- and, while "understanding" and "good argument" is perhaps helpful and useful at times, it's important to not "take the bait" and be on the defensive. I don't want anybody to "tolerate" me. If there's a problem, it's THEIR problem. As a Christian it is important to live eucharistically-- that is, a life of response and thanksgiving for all that you are. I am sure that God weeps and laughs at how humankind has interpreted and re-sculpted the Word.

James, one reason I chose to reprint this particular article on the Bible and homosexuality is that it seem less “defensive” than most. I appreciate your comment and your positive attitude.