Artists are using spiritual imagery to draw attention to LGBT rights in Russia as the Olympics begins in Sochi tomorrow (Feb. 7).

The holiness of the Russian struggle for LGBT equality is emphasized in two new artworks: “De Profundis” by queer British artist Tony O’Connell and “Postcard to Putin” by gay American artist Stephen Mead.

LGBT rights supporters are using the Sochi Olympics to call worldwide attention to anti-gay laws passed last year under President Vladimir Putin, especially one banning “gay propaganda.” Statements in favor of LGBT rights during the Olympics, including waving rainbow flags and other pride gear, would break the law against discussing LGBT issues in front of children. Homosexuality itself was decriminalized by Russia in 1993.

In “De Profundis” O’Connell bestows a halo upon a gay Russian who is being arrested for protesting laws that oppress LGBT people. Watching in the background are Christ and paired male saints Sergius and Bacchus, who were ancient Christian martyrs and lovers. “They seem appropriate protectors in this situation,” O’Connell said. Jesus and the saints witness the scene without condemning the police, but are present for them too.

The Latin title means “From the Depths.” It comes from Psalm 130, which is quoted in an inscription on O’Connell’s image:


“The Latin is from the De Profundis which was a Catholic prayer I grew up with,” he explained. He translates it as:

Out from the depths I have cried to thee, Oh Lord;
Lord hear my voice!


“De Profundis” is also the title of an important epistle written by 19th-century gay Irish writer Oscar Wilde during his imprisonment for homosexuality.

O’Connell symbolizes the whole Russian LGBT-rights struggle with a news photo that documents the 2010 arrest of Nikolay Alexeyev, founder and chief organizer of Moscow Pride since 2005. He is considered Russia’s best known LGBT-rights activist.


“Postcard to Putin” by Stephen Mead

New York gay artist Stephen Mead also uses his talent and spiritual vision to shed light on human rights abuses in Russia as the Olympics approach. He began his “Postcards to Putin” series by superimposing the text of his “Dear Vladimir” letter over a candle and a hand raised in blessing the Olympic torch on a computer screen.

Just days before the Olympic opening ceremony, he expanded the series with a new mixed-media collage that offers a simple prayer: “Olympics: please keep safe. Watch over, protect all, during and after…” 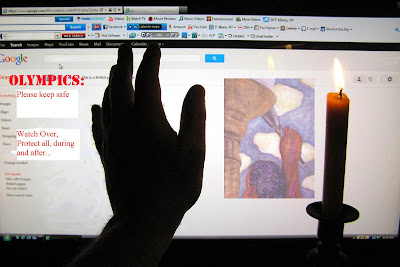 “Postcard to Sochi” by Stephen Mead

“I did this one a couple days before the Olympics are to begin, feeling that safety is the most important message right now, a sort of prayer or energy of hope and protection,” Mead said. “My sentiment is that if we can make art and at least post it online so it is out on the World Wide Web where anyone can see it, maybe that will bring some hope to the LGBT people of Russia (and elsewhere).”

For more about Mead and his art, see my previous post Gay artist links body and spirit.

A gallery with more than 50 images called “Illustrators in Support of Gay Rights in Russia” has been set up by Anna Goodson Illustration Agency.

“We believe that Art Speaks Louder Than Words and we wanted to make a statement and show the world that our agency and illustrators don’t support discrimination or violence of any kind, regardless of religion, race or sexual orientation,” Goodson wrote.

As the Olympics gets underway various LGBT groups are planning protests around the world to denounce the injustice and express support for LGBT Russians. For example, the Human Rights Campaign has organized a variety of actions on “Russia’s anti-LGBT agenda” and is using social media for an initiative called Love Conquers Hate.

While the Olympics rightly puts the spotlight on Russian injustice toward LGBT people, there is no reason  to be smug about LGBT rights under U.S. law. Nine American states limit what teachers can say about homosexuality in ways that are similar to Russian law, according to an article at thinkprogress.org.

After creating the “De Profundis” image last summer, O’Connell has had second thoughts about whether Alexeyev deserved a halo. “I felt strongly about how brave he been to stand up the rise of fascism in Russia and the level of violence and legal persecution he had received. Unfortunately he seems to gone off the rails a bit since then as this article suggests his own dangerous tendencies toward misogyny and anti-semetism. Of course that controversy only arose after I had made the image and partly I wonder if it is the Russian state publicity machine slinging mud at him to separate him from allies in the west,” O’Connell said.

Boris and George: Russian saints united in love and death (Jesus in Love)

Tony O’Connell reclaims sainthood by finding holiness in LGBT people and places (Jesus in Love)
___This post is part of the Artists series by Kittredge Cherry at the Jesus in Love Blog. The series profiles artists who use lesbian, gay, bisexual, transgender (LGBT) and queer spiritual and religious imagery.

Posted by Kittredge Cherry at 12:40 PM

A Russian blog wrote a major article based on this post. I’m glad that our efforts are encouraging LGBT Russians. The article says about Tony’s art: “Despite its apparent simplicity, it has plenty of deep shades of meaning, combining both faith , suffering and persecution for sexual orientation. Thank you Elena Preobrazhenskaya! Спасибо!

You can read it in Russian at this link:

I am a bit of a latecomer to this blog post. Have been watching the Sochi Olympics sporadically - partly out of my disappointment that my grandson failed to make the US Speed Skating team, for which he's been trying for 8 years, and partly because I DON'T like the whole abuse of the Olympic Spirit epitomized by the "official" attitude towards LGBT people. However, we are "iced in" here in Atlanta today, so I both watched a bit more on TV, and have more time to catch up on the blog. Thanks for the JIL newsletter which arrived today and called this post to my attention!