“The Resurrection” by Eny Roland (Courtesy of ArtCenter/South Florida)
Queer new visions of Jesus and the saints are explored by Latino artists in two major art exhibits at museums on both coasts in March:

* “In His Own Likeness” illuminates divinity and its relationship with gender, including sexuality “expressed beyond the hetero norm.” It runs through March 16 at ArtCenter/South Florida in Miami Beach. Tonight (Wed., March 12) a conversation with the curator and special guests will be presented there. The exhibit features four artists from Guatemala, Mexico and Cuba.

* “Sinful Saints and Saintly Sinners at the Margins of the Americas” examines sacred figures who walk the fine line between sinfulness and sanctity, including Catholic saints reworked from a lesbian Chicana perspective. It will be on display at the Fowler Museum at the University of California, Los Angeles (UCLA) from March 30 to July 20. The show features work by more than 20 artists from Mexico, Brazil, Guatemala, Argentina, and the United States.

Details about each exhibit are presented below, along with an exclusive interview with the curator of the Florida show.

In His Own Likeness
“In His Own Likeness” aims to reaffirm all existence as equally divine through its diversity. The exhibit uses the concept of a male God to take a fresh look at men’s power, explore male sexuality and eroticize men as objects of desire for both men and women in the sacred union of the body and spirit.

The exhibit draws its name from the creation story in Genesis 1:27: “God created humankind in his own image, in the image of God he created them; male and female he created them.”  The scripture itself contains complexities about gender and sexuality..

"The photographs, video, painting and sculpture work together -- and individually -- to show how male sexuality can be expressed beyond the hetero norm that has traditionally defined the 'rules' of gender roles," says curator Marivi Véliz, a contemporary art lecturer specializing in Central and Latin American Art who moved to Miami last year. This is her first exhibition in the United States. Véliz is originally from Cuba with experience curating and lecturing throughout Guatemala, Nicaragua, Brazil, El Salvador and Honduras. In recent years, her focus has been gender studies.

In an interview with Jesus in Love, the curator identified the most frankly homoerotic works in the show as “The Resurrection” and the “Sweet Mortification” series by Guatemalan photographer Eny Roland and “Very, Very Light… and Very Dark: A Police Officer with Alzheimer’s” by Cuban painter Rocio Garcia. 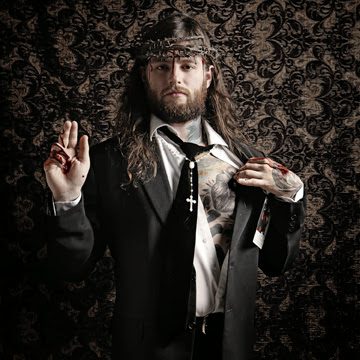 “Bleeding Heart (Sangrado Corazon)” by Eny Roland (Courtesy of ArtCenter/South Florida)
In his 2013 “Sweet Mortifications” series, Roland redefines the standard “Sacred Heart” iconography in which Jesus reveals his physical heart burning in his chest. The artist photographs a Christ figure in a business suit, opening his shirt almost seductively to unveil a heart tattooed on his supple skin. The title “Sangrado Corazon” (Bleeding Heart) is a play on the Spanish phrase Sagrado Corazon (Sacred Heart).

Roland eroticizes Christian imagery in line with the exhibit’s stated purpose of revealing the divinity within the sensual side of human nature. He also critiques Catholicism for imposing a culture of death by celebrating Christ’s Passion and suffering instead of his resurrection, thereby inflicting a sense of sinful guilt that serves as spiritual and social control.

The Christ figure in Roland’s “The Resurrection” is embodied, attractive and alive on every level, uniting sexuality and spirituality. The photo comes from his 2013 “Fabrica de Santos” (Factory of Saints) series.

Eny Roland is a self-taught artist who began his career in Guatemala City as a photojournalist and progressively found himself working with portraiture and urban photography. His photos combine kitsch, pop, religion, and eroticism.

As curator Véliz drew together a variety of art to examine divinity, gender and power. She discusses the exhibit in an exclusive interview for the Jesus in Love Blog with Kittredge Cherry, art historian and author of “Art That Dares: Gay Jesus, Woman Christ, and More.”

Kittredge Cherry: You say that you wanted the exhibit "to show how male sexuality can be expressed beyond the hetero norm." Please explain more. The focus of the Jesus in Love Blog is LGBTQ spirituality and art, so my readers will want to know: How does this exhibit express the homoerotic?

Marivi Véliz: In many ways, especially the work “Very, Very Light… and Very Dark: A Police Officer with Alzheimer’s” by Rocio Garcia, and the photos in the series “Sweet Mortification” and “The Resurrection” by Eny Roland. In Rocio’s case, it’s very clear because there are no women represented, only men in sexual situations. For Roland, the men (chosen as models in the photos) almost always follow Greco-Roman standards of beauty, and seek to puncture the delicate line between sexual ecstasy and religious ecstasy.

KC: How does the exhibit change the traditional image of Jesus Christ to affirm the whole spectrum of human sexuality?

KC: Do any of the artists identify as gay or queer?

KC: What special insights do Latin American artists bring to the theme of sexuality and spirituality, especially the Christian tradition?

MV: A deep Catholic tradition exists at the very foundation of Latin American culture in general, especially as part of the primary education system in the early years of life and as a tool of repression of the body and sexuality in general. This might help explain the various reinterpretations of martyrdom, resurrection, etc., that are most notable in Roland’s artwork.


“Santa Wilgefortis” from “Queer Santas” series by Alma Lopez
Power and womanhood are addressed in the exhibit by works such as López’s Queer Santas and Judithe Hernandez’s Luchadores (Mexican female masked wrestlers). They will discuss their artistic practices, their interest in these figures, and feminism at an “Outspoken Conversation” lecture April 5 at the Fowler Museum.

Lopez is married to author Alicia Gaspar de Alba, who contributed an essay to exhibition catalog. The book will be distributed by the University of Washington Press this spring. Gaspar de Alba’s essay focuses on the work of Lopez, Hernandez, Liliana Wilson and Delilah Montoya.
___

To read this post in Spanish / en español, go to Santos Queer:
Los museos de arte exploran temas cristianos queer en nuevas exposiciones
___
Special thanks to Terence Weldon of Queering the Church for the news tip about “In His Own Likeness.”

This post is part of the Artists series by Kittredge Cherry at the Jesus in Love Blog. The series profiles artists who use lesbian, gay, bisexual, transgender (LGBT) and queer spiritual and religious imagery.