The two rainbow Christian images made their debut recently as part of the exhibit “Sacred Stories of the Body: Gender, Sexuality and Spirituality” in the United Kingdom. It was on display during May and June in the gallery at 35 Chapel Walk in Sheffield, England. The show featured five artists with a range of sexual identities and religious traditions.

Stott, a Methodist minister and art therapist in Sheffield, displayed a number of paintings that explore his experiences as a gay Christian. Two bold new rainbow images stand out:

* Jesus wears a rainbow loincloth as he hangs on the cross in “Solidarity.” This single powerful image expresses God’s solidarity with the suffering of LGBTQ people. Whenever anyone is abused or killed for their sexual orientation, Christ is crucified. Stott portrays the queer Christ figure in a stencil style with painterly drips, similar to the satirical street art of British graffiti artist Banksy.

* A Madonna wraps a rainbow flag around herself and the Christ child in an untitled work by Stott. The dignity and tenderness of the image suggest the holiness of LGBT families. The painting suggests the love of a mother for her queer child… or the bond between a lesbian mother and her child. When lesbians use artificial insemination to have babies without heterosexual contact, it reminds some of Mary’s miraculously queer virgin birth.


“Untitled” by Richard Stott
Stott painted the Madonna with rainbow robes in fall 2013 during a conference organized by Changing Attitude, an Anglican LGBTI group. He was invited to create art while the conference met at a Victorian church in Stockport. In a reflection about the image on his blog, Stott writes:

The church had been festooned in rainbow flags and the way the fabric curved as it hung beguiled me. They echoed the folds of cloth on a statue of the Virgin Mary with her child at the opposite side of the church to me. So I brought them together and this image emerged.

It was only at the end, when I stepped back to look at what I’d done that I began to reflect on the meaning of the picture. What started as a study of a very material and ordinary thing, the shadows in hanging fabric, became an image laden with significance…

The “Sacred Stories of the Body” show also included Stott’s “Intimacy with Christ” triptych, which grew out of his meditations on the medieval mystics. The exhibit contains more of his new work as well as his series on the Body of Christ and a fresh interpretation the angel Gabriel as an ambiguous semi-nude harbinger of sexuality / pregnancy.

Stott posted his article about the “Sacred Stories of the Body” exhibit on his blog, I Ask for Wonder. It features more images and info about the other art and artists in the show. 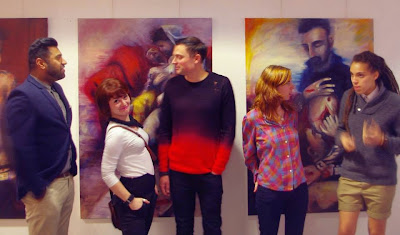 “It seems to me that both the gay identity and the creative obsession of the artist are prophetic ways of being. Both entail a way of seeing and experiencing that fractures the world and breaks up comfortable formulations of identity, gender, relationships and theologies that some may see as blasphemous or disturbing.”

Boy have you got my dander up this morning. I pray that you visit my site and get a glimpse of the truth of the COVENANT RAINBOW and how you are knowingly or not undermining this sacred symbol of the God's relationship with man.

This repackaging of Jesus and Mary is taking it to the limit and I pray for God to open your eyes and reveal His TRUTH to your heart.

Meanwhile, I love you as a Christian is called to love so I abhor what you are doing which is clearly against what God has commanded.

I will pray today.

Mike, I visited your blog and saw that you actually wrote a whole post attacking the Rainbow Christ and Rainbow Madonna images, complete with a quote from Hitler.

Thank you for praying that God will open my eyes and reveal God’s truth to my heart. I will pray the same for you.

Scripture does not condemn loving, responsible homosexual relationships. There are many resources that fully explain the Bible and homosexuality. Here are a few that I recommend:

The Bible and Gays: Is it a sin to be gay? Did Jesus condemn homosexuality?/

Jesus said nothing directly about homosexuality, but he did advocate love for all and befriended prostitutes, lepers and other outcasts. He also said, “Do not judge, so that you will not be judged.” (Matthew 7:1)

Who is attacking who? For 2000 years Mary has been called blessed by Christians. Now she is being used for an agenda that the Holy Catholic Church has always judged as disordered and if acted upon sinful. This my sister is an attack.

I will not stand idly by while the Sacrament of Marriage is desecrated. We have an obligation to be holy families.

As for judgement, only God ultimately judges our eternal destiny but woe to the human being who does not judge what is intrinsically good from what is sinful.

Yes pray for me, cause if any of my work goes viral, the persecution will be intense.

There are so many different types of marriage in the Bible, from polygamous marriages to the call to celibacy of all believers, but if you cannot live in celibacy devoted only to God, to be married in order to quench your desires ("burn with fire" isn't about hell). I urge you to do more thorough exegesis of Scripture and to pray about the harm you are causing and how you may be sinning instead of following the greatest commandment (Matt 22:36-40, etc.). Sin is brokenness in relationship--either not loving God, others as ourselves (like Jesus), or ourselves as God does. This art uses the rainbow appropriately, in that it is a sign of a covenant between God and humankind and a sign of hope, which is exactly what it is here.

Peace be with you.