Mel White stands for LGBTQ religious justice then and now 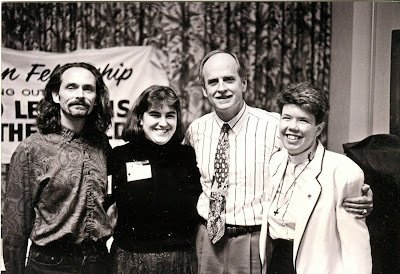 Mel is famous for confronting the religious right, but that day he challenged what he called the “unsure middle” that enables them to attack LGBTQ people. His message still rings true now.

“You are responsible for the deaths of my gay and lesbian brothers and sisters because they come to you and they get indecision,” Mel told NCC leaders at the event that I organized as national ecumenical officer for the LGBTQ-affirming Metropolitan Community Churches.

He began by detailing the threat posed by radical conservative Christians, but he reserved his anger for the “unsure middle” that enables them to attack LGBTQ people.

“If I had my say I’d never step into the halls of NCC for one more word of dialogue. NEVER! I’d go to the community. Every conversation with you is a conversation I lose with my gay and lesbian brothers and sisters who are dying,” Mel told the audience of more than 50 people, including NCC General Secretary Joan Campbell.

Back in 1983 the NCC voted to postpone indefinitely MCC’s application for membership, leading to a decade of “dialogue” on homosexuality and Christianity. Many of its member churches are liberal denominations that also used long years of dialogue to delay decisions on same-sex marriage, ordination of LGBT clergy, etc.

Today I can see progress on equality for sexual minorities in the church, thanks to Mel and many others like him.  The middle has moved, but Christian conservatives (and those whose silence supports them) still need to be challenged for spreading hate and discrimination.

I remembered Mel’s speech recently when I read a question posted now at Soulforce.org. Mel founded Soulforce to end religious and political oppression of LGBTQ people by using non-violent resistance in the spirit of Martin Luther King, Gandhi and Christ. Their website asks: “What is your favorite Soulforce memory or activist lesson learned over the years?”

My memory actually dates back to a few years before Mel founded Soulforce in 1998 with his partner Gary Nixon. But the seeds of Soulforce already seemed to be stirring in his soul.

Mel White was a high-ranking insider in the Evangelical Protestant movement in the 1960s, 1970s and 1980s. He ghostwrote autobiographies for such famous right-wing televangelists as Jerry Falwell, Pat Robertson, and Billy Graham. Meanwhile he was spending decades trying to “cure” his homosexuality with “ex-gay” therapy, including prayer, fasting, exorcisms and even electroshock treatment.

Then he came out as gay in 1993, transferred his clergy credentials to MCC and became a national media sensation. He was interviewed on hundreds of radio and TV broadcasts, including a full segment on “60 Minutes.” His bestselling autobiography, “Stranger at the Gate: To be Gay and Christian in America,” was published in April 1994, just months before he spoke at the NCC forum.

Others in our Metropolitan Community Churches delegation at that meeting included Revs. Tanis of MCC San Francisco, Dexter Brecht of Vieux Carre MCC in New Orleans, and Carolyn Mobley of MCC of the Resurrection in Houston.

Mel and I shared a variety of experiences over the years. We have much in common as LGBT religious activists/authors who have also worked as ministers and professional writers. In addition to experiencing Mel’s tough talk against the religious right, I witnessed his weakness for chocolate-chip cookies on that same weekend in New Orleans. Another time he let me wear his jacket one chilly night when we walked on the beach together. We still keep in touch.

But the day Mel confronted the National Council of Churches stands out as a milestone memory. Today I have fresh appreciation for the activist lessons that Mel embodied when he joined me at the NCC meeting: Silence and indecision by the “unsure middle” can allow bigots to triumph. So speak up, speak out.
___
Related links:


Copyright © Kittredge Cherry. All rights reserved.http://www.jesusinlove.blogspot.com/
Jesus in Love Blog on LGBT spirituality and the arts

Posted by Kittredge Cherry at 1:39 PM