Songs from “The Passion of Mark” were recently posted online for the first time on Flores’ new Soundcloud page, and the creators are looking for a venue for its debut onstage. Both live in California. Their hauntingly beautiful sacred music brings a fresh approach and gay sensibility to the traditional elements of a Passion play – a dramatic presentation of the events in the life of Jesus from the Last Supper to the resurrection.

In their portrayal of the Passion, dreamlike music transports the listener to a blissful state where divine union feels imminent.

“We created it as a spiritual work to help transform consciousness and bring people into the divine,” Ravarour said. “Any rendering of Jesus must go deeply to the sacred heart of life and all existence. In essence, we are addressing the soul, eternity and God.” 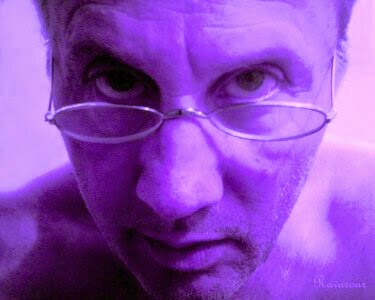 Jesus and his Beloved sing sensitive lyrics to each other that inspire enlightenment by putting the ineffable into words such as these:

The lyrics speak of transcendental male-male union between “you” and “I” with only a few references to Christ. The creators’ intention to construct a full-fledged Passion play with a gay Jesus is made clear in their written synopsis and stage directions.

“Throughout cultures and time people tend to create deities in their own image... and so a gay Jesus is healing to LGBT people who have been excluded from many Christian churches,” Ravarour explained.

According to the synopsis, “The Passion of Mark” begins under a starry night sky, when Jesus and his 12 disciples gather and declare their love around a reflecting pool in the Garden of Gethsemane. A mysterious young man follows the group into the garden.

The opening song is “In the Beginning,” An angelic voice sings with an orchestrated version of the electronic score in the recording posted here and at Flores’ new Soundcloud page:


The full lyrics of “In the Beginning” are posted at the end of this article.

The young man disappears while the disciples and Jesus wash each other’s feet in the pool. After the disciples fall asleep, he returns and embraces Jesus. The next scene unfolds during a sweet song called “Surrender,” which begins:

Let us anoint each other
With the Sacrament of Love
Come, drink from my cup
Before I’m gone


Jesus takes off the young man’s shirt, washes his feet, and feeds him bread and wine. They bathe together in the reflecting pool and the night mist conceals their bodies. They exit the pool and dry each other. Then the young man leaves.

The disciples wake up and ghostly visitors from Jesus’ past arrive to thank and bless him. Jesus and the disciples share communion with the audience until Jesus is left alone onstage. His crucifixion is communicated by the dark atmosphere of the music, which climaxes as blood-red light surrounds him.

The final scene unfolds at sunrise in the garden. The disciples wake to find that Jesus is back with them, only now his hands are marked by the stigmata of crucifixion wounds. They hug him good-bye and leave him alone – but not for long. The Passion play ends when the mysterious young man returns to embrace and kiss Jesus.

“Adrian and I have written numerous works which touch upon themes from various philosophical and spiritual perspectives and traditions,” Flores said. “In Mark we wanted to approach the personality and story of Jesus Christ within the structure of a mystery, Passion play, and musical tableau...combining various storytelling and music traditions, the Scriptures, poetry, art, liturgical music, etc. into a unified whole, and which in and of itself would be ultimately be a ritual. The piece is also quite simple, dream-like, and at its core, simply a meditation.”

“The Passion of Mark” was inspired by Morton Smith's book “The Secret Gospel,” and incorporates elements from Will Roscoe's book “Jesus and the Shamanic Tradition of Same-Sex Love,” Flores and Ravarour said.

The manuscript known as the “Secret Gospel of Mark” includes more details about Jesus’ relationship with the “naked youth” than Mark’s standard canonical gospel. Secret Mark says that the pair spent the night together while “Jesus taught him the mystery of the kingdom of God.” The lost gospel was discovered in 1958 by Smith, a Columbia University history professor. He interpreted it to mean that Jesus may have used nocturnal rituals of sacred sex to initiate male followers. Roscoe’s book re-examines the lost text, finding parallels with shamanic rites from ancient cultures that pre-date Christianity.

Secret Mark has been questioned as a possible hoax, but the lack of solid evidence doesn’t mean that the homoerotic Christian initiation rituals never happened, nor does it diminish the power and importance of envisioning a queer Christ today.

“I used Morton Smith's ‘The Secret Gospel of Mark’ as my departure point, and created a what-if text based upon a lifetime of reading about Jesus and countless theories and interpretations of him; and reasoned how would spiritual love and love be shared between them,” Ravarour explained. “And so my lyrics are all imagined. It’s a Passion play of what his followers would have expressed could they have said more. It’s about Love which includes the whole being....spirit/soul, mind, body. You know, LOVE.”

The lyrics and music both have an intoxicating, hypnotic quality that grows out of the artistic process of its creators.

“To be perfectly honest, I write the lyrics from a sort of trance space,” Ravarour said. “I intuit the subject, let it churn in me for days, and then birth-write the lyrics in one sitting of only 10 to 30 minutes. And I never rewrite them because I would have to be in the same sacred space to edit them. Christopher used tell me that he reread the lyrics over and over until he felt them and wrote music from that embodiment.”

Flores elaborated on the importance of the gay Jesus theme in a statement for the Jesus in Love Blog: “The concept of a gay Jesus is controversial solely because of the religious, social, political, and moral structure Western thought and culture subscribes to. In reality, there is nothing revolutionary about this if we subscribe to a different theory about God, Creationism, gender, and male / female roles. On a very basic level, a new vision of Jesus may create a sense of empowerment for some, a reclamation for others of a philosophy and message which has primarily been utilized to instill fear, guilt, and control over society…. I prefer to eradicate any definition of Jesus and view him more as the physical attribute of a Divine Being, and within that, Christ becomes the physical manifestation of such abstract ideas of love, kindness, peace, healing, and so on.”

“The Passion of Mark” has never been produced on stage, although Flores and Ravarour created it in 2002. But some of their other LGBT-themed spiritual collaborations have been performed in the years since then. For example, “The Transfigured Body: A Requiem in Celebration of Gwen Araujo” premiered in 2003 at Founders Metropolitan Community Church in Los Angeles, and “The Celestial Veil” was presented at Hollywood Lutheran Church in 2007.

“It is probably oddly fitting that Mark has taken this long to come to fruition, given the current state of world events,” Flores said.

Ravarour is a long-time LGBT-rights activist who co-founded the LGBT youth organization Vanguard in San Francisco in 1965. In Los Angeles he was an associate bishop and rector at the Beloved Disciple parish of Bishop Robert M. Clement’s American Catholic Church and he continued as bishop in Mikhail Itkin’s last Order of Thomasines. Since 1979 he has created various LGBT/gay art, photography and writings. He received his Ph.D. in Eastern philosophy and biopsychic energy studies in 1985 from the Union Institute under the supervision of Jose Arguelles (Valum Votan).

His books include "Epiphanies: Energy Flow Poetry" and "Portals: Energy Flow Photography," and "Keys to Spiritual Being: Energy Meditation and Synchronization Exercises." He currently divides his time between Los Angeles and San Francisco. “Rather than a traditional ministry, I was set-apart to make spiritual art as my ministry; personally, I am not bound by 20th-century conventions,” he said.

Los Angeles-based composer Flores is a multi-disciplinary artist who is active as a sound, set and lighting designer, audio engineer, and stage / production manager. Past commissions include scores for productions at the Los Angeles Theater Center and technical support for the Getty Center, Mark Taper Forum and East-West Players. “He has given his life to composing music of the soul for individual spiritual connection and societal transformation,” Ravarour said.

Flores was raised in the fundamentalist, evangelical, and charismatic traditions, but now he simply defines himself as spiritual. “During my formal music studies I was introduced to Buddhism, within which I was finally able to reconcile my views about the World, Life, and God,” he explained. “The mid-1980’s proved to be my spiritual awakening, discovering numerous world, social, political, philosophical, and metaphysical perspectives, and developing a strong interest in Mesoamerican history, mythology, and philosophy.” In particular he was inspired by the work of Jose Arguelles, visionary mystic and author of “The Mayan Factor” and the multi-volume Cosmic History Chronicles.

The complete lyrics for “In the Beginning,” the opening song in “The Passion of Mark,” introduce readers and listeners to the sublime love expressed in the work.

You, formed of soul and light
You, who occupy space and time
When you lived in this time
How blessed I am to behold you
Sacred friend whom I love

You are my Christlight
True soul, alive, revealed
I am your Twin Flame
Alive within our unity…

“The Passion of Christ: A Gay Vision” paintings by Douglas Blanchard


____
This post is part of the Queer Christ series by Kittredge Cherry at the Jesus in Love Blog. The series gathers together visions of the queer Christ as presented by artists, writers, theologians and others.