Why we need LGBT saints 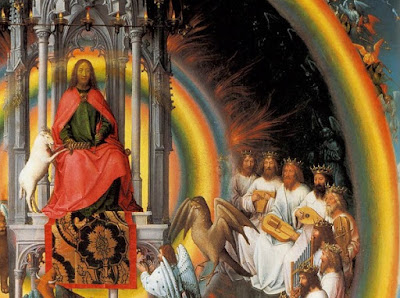 Rainbow detail from St. John Altarpiece by Hans Memling (Wikipedia.com)
It’s time to welcome the queer saints. Many believe that saints and other souls will visit this weekend for Halloween, All Saints Day, All Souls Day, and Day of the Dead (Dia de los Muertos). LGBT saints are important because people are searching for alternative ways to lead loving lives.

Churches have tried to control people by burying queer history. The LGBT saints show us not only THEIR place in history, but also OUR place -- because we are all saints who are meant to embody love. We can tap into the energy of our ancestors in faith. For some they become friends and helpers, working miracles as simple as a reminding us that “you are not alone.”

For a new version of this article, click this link to Qspirit.net:
Why we need LGBTQ saints: A queer theology of sainthood


At first I thought that LGBT saints were rare. Gradually I came to see that they are everywhere throughout all time and they are among us now. We have all met saints in our lives. They are ordinary people who are also extraordinary.

Calling someone a “queer saint” is a liberating act in two ways: The most obvious one is that revealing the hidden queer sexual orientation or gender identity of traditional saints liberates people from sex-negative, oppressive church dogmas. In addition, revealing the “saintliness” of LGBT people ignored by the church liberates people from the tyranny of the sacred/secular dichotomy. Phrases like “queer saint” make a nice shorthand for headlines -- neatly challenging the assumption that sainthood and LGBTQ identity are mutually exclusive.

As All Saints Day approaches, I offer reflections on what I have learned by writing more than 70 profiles in the LGBT Saints Series over the past eight years. This is my queer theology of sainthood.

Who are the LGBT and queer saints? If you want some specific names of this rainbow tribe, visit the LGBT Saints page at http://jesusinlove.org/saints.php.

One of the greatest challenges has been to figure out who is a “saint” and who is “LGBT.” If the boundaries of sainthood are slippery, then the definition LGBT is even more fluid.

Most mainstream churches would not canonize any saints who were openly LGBT, so we must claim our own saints. It’s important to re-evaluate familiar figures as well as to recover those who have been lost and recognize the saints of our own time. The church may seem to have the power to decide who is a saint, but each individual can also choose for themselves. Paul urges us to “work out your own salvation with fear and trembling” (Philippians 2:12).

Mitch Gould, a historian of queer and Quaker subjects, summed up the dilemma well when he told me, “Sainthood is a devilishly nuanced accusation.” Traditional stories of the saints tend to be overly pious, presenting idealized super-heroes who seem distant and irrelevant. Saints have been used to get people to passively accept oppressive situations. Too often the saints have been put on a pedestal to glorify virginity and masochistic suffering. The emphasis on miracles disrespects nature, the ongoing miracle of life.

Feminists have criticized saints as tools of the dominant morality, but with LGBT saints the opposite is true: They saints can shake up the status quo. We can restore the complex reality of saints whose lives are being hijacked by  hagiograpahies and hierarchy to enforce the status quo. Queer saints can help reclaim the wholeness, connecting sexuality and spirituality for the good of all.

I began writing about LGBT saints after finishing a series of books on the queer Christ (Jesus in Love novels and Art That Dares). Many people told me that they couldn’t relate to a gay Jesus, but they liked the idea that LGBT people were among his followers. Church leaders have used saints to impose control from the top down, but the desire for saints springs naturally from the grassroots. People are drawn to the presence of spiritual power in the lives of the saints, and their willingness to use that power for others, even at great cost to themselves. Saints attract others with the quality of their love, even though their personal lives may not be “saintly.”

I was aware of new research and art about LGBT saints, so I was shocked to discover that it was not easily available online. Largely due to the church’s crackdown on LGBT spirituality, much of it was buried under obscure code names like “images that challenge” -- if it was available on the Internet at all.

As an independent blogger, I am free to put LGBT saints out there where more people can find and benefit from them. I decided to uncover and highlight holy heroes and role models to inspire LGBT people of faith and our allies. The positive response quickly affirmed that people are hungry to connect with queer people of faith who have gone before.


“The Forerunners of Christ with Saints and Martyrs” by Fra Angelico, 1428-30, Wikimedia Commons
What is a saint?
My definition of who qualifies as a “LGBT saint” continues to expand. First I included saints officially canonized by the church, but I soon discovered that many have achieved “sainthood” by popular acclaim. The church didn’t even have a formal canonization process for its first 1,000 years.

Ultimately all believers, living and dead, can be called “saints,” a practice that began in the early church. In the New Testament, Paul used the word “saint” to refer to every member of the Christian community, a practice continued by Rev. Troy Perry, founder of Metropolitan Community Churches. One of my memories from working with him was that whenever he wrote a letter to MCC members, he addressed it as "Dear Saints." We always got back some responses from people protesting, "I'm not a saint!" But in a very real sense, we are all saints.

Dictionaries define a saint as “a holy person” or “an extremely virtuous person.” I rather like the concept of sainthood that emerged in comments on this blog during a discussion of the post “Artist shows sensuous gay saints.” Atlanta artist Trudie Barreras wrote: “My definition of saint has absolutely nothing to do with what the hierarchical church defines, and everything to do with the quality of love displayed.” Or, as gay author Toby Johnson commented, “Being a saint means creating more love in the world.”

Sainthood comes in many different forms. Some become saints by leading an exemplary life, but the surest path to sainthood is to risk or lose one’s for the good of others. As Jesus said, “Greater love has no one than this: to lay down one’s life for one’s friends.” (John 15:13). Martyrs, from the Greek word for “to bear witness,” are a common type of saint.

Sometimes readers object that my LGBT saints series includes modern martyrs whose lives were not “saintly.” My understanding is that martyrs need not be role models, but they are honored simply because they were killed for a particular cause. Therefore I include people such as Harvey Milk and Matthew Shepard because they were killed for being gay and their deaths furthered the cause of LGBT rights, regardless of their flaws.

Whether or not they died as martyrs, the lives of the saints were indeed difficult. Our lives are difficult too -- and that can become a point of connection. Like today’s LGBT Christians, the saints sometimes faced opposition from within the church. Some martyrs, including cross-dresser Joan of Arc, were killed not FOR the church, but BY the church!


What is LGBT?
Lesbian, gay, bisexual, transgender and queer did not exist as categories throughout most of the history in which the saints lived. A convenient way around this dilemma is to say that LGBT saints are those of special interest to LGBT people and our allies. The term “queer” is increasingly used to describe gender-variant people of the past, so I often use the phrase “queer saints.”

Some deny the existence of historical LGBT saints because it’s almost impossible to prove their sexual activity. However, same-sex love does not have to be sexually consummated for someone to be honored as an LGBT saint. Deep love between two people of the same gender is enough.

Homosexuality is more than sexual conduct. The American Psychological Association defines sexual orientation as “an enduring pattern of emotional, romantic, and/or sexual attractions.” The dominant Christian culture tried to suppress overt homosexuality, so any hint of homosexuality that survives in the historical record should be given extra significance. Many official saints were nuns or monks living in same-gender convents or monasteries.  Naturally their primary emotional attachments were to people of the same gender. Soon almost all saints seem LGBT!

Let us be inspired by the LGBT saints who surround us as a “great cloud of witnesses” and commit ourselves to our own queer paths toward sainthood.

___
Image credit: God is enthroned in concentric rainbows with 24 elders seated within the outer rainbow in a detail from the 15th-century St. John Altarpiece by Hans Memling (Wikipedia.com). The image is based on John’s vision of the Apocalypse from the Book of Revelation.

I have expanded on the ideas presented here by writing theological reflections based on feminist and queer theology at the following two blogs:

Feminism and Religion Blog: Feminism leads to a queer theology of sainthood by Kittredge Cherry

Who are the "Queer Saints and Martyrs"? by Terence Weldon (Queering the Church)

LGBT-friendly memorial for All Saints, All Souls and Day of the Dead

LGBT litany of the saints: Harvey Milk, pray for us; Joan of Arc, pray for us... by Rachel Waltz

Queering All Saints and All Souls, Celebrating the Queer Body of Christ by Adam Ackley (Huff Post)

A Litany of All the Saints by James Kiefer

All Saints Day: Why We Need LGBT Saints by Kittredge Cherry (Believe Out Loud)

Sanctity And Male Desire: A Gay Reading Of Saints

by Donald Boisvert
Spitting at Dragons: Towards a Feminist Theology of Sainthood

Special thanks to CJ, Sage, Terence, Dennis, Liz, Trudie, Toby, Mitch, Adam and Eric for comments and conversation that helped me develop this queer theology of sainthood.