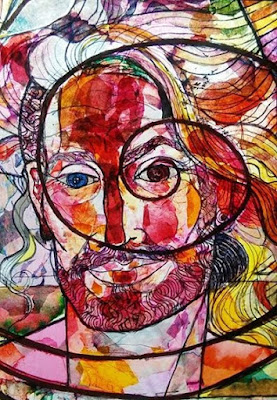 A Cosmic Christ appears with subtle LGBT symbolism in the work of Chicago artist Doyle Chappell.

He has done variations on the Cosmic Christ theme for years -- most recently in colorful windows dedicated Sept. 20, 2015 at A Church 4 Me Metropolitan Community Church where he is a member. The phrase “Cosmic Christ” refers to Christ who is continually incarnated in all creation.

“In the windows for A Church 4 Me in Chicago, the Christ wears a diamond earring on the left ear which for me is a bit of a gay reference,” Chappell told the Jesus in Love Blog. 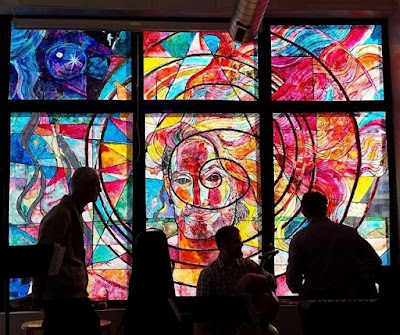 Multiple intersecting and nested pink triangles within triangles repeat a symbol imposed on gay prisoners in Nazi Germany and later reclaimed by the LGBT community.

“The triangle is more than a gay symbol,” Chappell explained. “It is to me a symbol of ancient wisdom that points to a higher level of consciousness toward the ‘Omega Point’ as expressed by the philosopher and Jesuit priest Pierre Teilhard de Chardin, one of the first theologians to show interest in the ‘Cosmic Christ.’”

Chappell’s art is also inspired by the book “The Coming of the Cosmic Christ: The Healing of Mother Earth and the Birth of a Global Renaissance” by Matthew Fox, a Dominican friar who became an Episcopal priest and helped launch the Creation Spirituality movement.

Ultimately Chappell used LGBT imagery to enhance his vision of a Cosmic Christ for everybody. “My main intent was to honor the idea that ‘The Cosmic Christ’ is in all that has been created since the Big Bang and beyond our concepts of Christianity...in all particles of creation and certainly all life and honors all who seek to connect with the sacred wisdom,” he said.

He reiterated the concept of an all-inclusive Christ by making one eye blue and the other brown. “The hair of many colors explodes beyond the box and not only expresses absolute diversity but also the fire of the Holy Spirit,” Chappell added.

The 15-by-15-foot Cosmic Christ windows at A Church 4 Me were constructed with watercolor paper on clear acetate and painted with acrylic glazes. The technique results in a spectacular stained-glass effect.

The Chicago windows are the latest of several Cosmic Christ artworks that Chappell created for MCC, a denomination ministers primarily in the LGBT community. 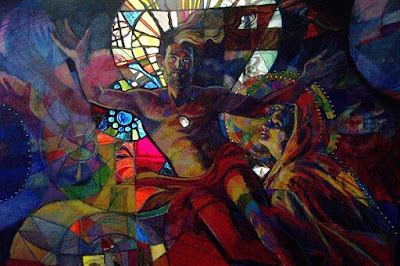 At MCC of the Rockies in Denver he did a 20-foot-tall Cosmic Christ with the reflection of a rainbow on his left leg. The monumental mural is located directly behind the church’s altar. “I used LGBT male, female and straight models to build a composite image that crosses over all sexualities,” Chappell said.

He also painted the Cosmic Christ as a live performance before a crowd at an MCC conference in Chicago. That painting now belongs to MCC founder Troy Perry. 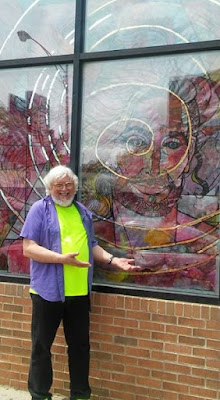 While the Cosmic Christ is one of his favorite subjects, Chappell is best known for his portraits. From the beginning of his art studies at the University of Texas, Chappell liked painting people. He uses layers of bright colors and painterly brushwork to express the inner qualities and outward appearance of each individual. Serious art collectors value his work and his portraits are included in many private collections. Some of his favorite portraits are of “just plain folks,” but his well known subjects include actress Daryl Hannah nd Lynda Johnson Robb, daughter of President Lyndon Johnson.

___
Special thanks for photos and info to Rev. Jennie Kitch, pastor of A Church for Me MCC, and Rev. Gordon McCoy.

____
This post is part of the Queer Christ series by Kittredge Cherry at the Jesus in Love Blog. The series gathers together visions of the queer Christ as presented by artists, writers, theologians and others. More queer Christ images are compiled in my book Art That Dares: Gay Jesus, Woman Christ, and More

Posted by Kittredge Cherry at 11:13 AM