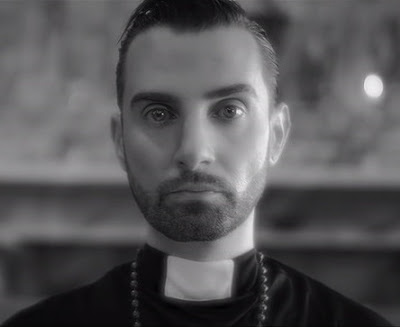 His single “Hiding” and its accompanying music video have offended some religious groups and delighted many listeners since its release in late January.

“I say, no more hiding,” explained Isaac, who is both a Christian and a supporter of LGBTI rights. “The message in my video is that everyone deserves to be loved for who they are without conditions.”

Based on Isaac’s own experiences, the video includes disturbing scenes of sparks flying as church leaders try to rid a man of same-sex attraction by zapping him with electric shocks.

“The electroshock scene in the beginning and end is a therapy which is still happening to gay people to convert them and UnGay them. This is supported and referred to by church organisations in secret. It happened to me!” Isaac said in his YouTube comments on the video.

Isaac plays the role of a priest who is in love with another man, but still helps administer the torturous church-sponsored ex-gay “reparative” therapy. 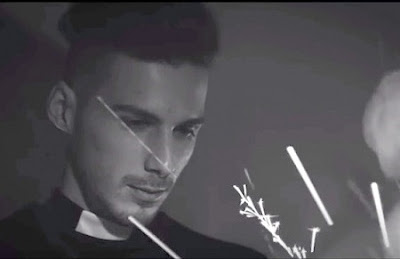 Ray Isaac plays a gay priest overseeing anti-gay electroshock therapy in his “Hiding” music video
“It’s time to hold mirrors up towards ignorant religious groups and force them to face the unrealistic terms and conditions placed on the LGBT community. We must expose what is going on behind ‘holy closet doors’ and change the rules to be more inclusive of all human beings,” Isaac explained.

The content is so tough that public-relations companies refused to help promote the music video. And yet Isaac’s video does offer hope that religious leaders have the potential to change and liberate LGBT people.

The emotional video also tells Isaac’s own story of loving another man who loves him back but is pressured to marry a woman, leading to unexpected plot twists and a surprise ending. “Ultimately, they must decide to either keep hiding or set themselves free and pay the consequences,” he said.

Isaac decided to portray a priest for the sake of LGBT clergy. He commented on YouTube that he wanted to express his hope for “a world where clergy and their partners will be accepted as gay, as well as every human being and their partners accepted by religions for being gay or bi or trans.”

Electric shock has been used in efforts to “cure” homosexuality since the early 20th century. The method was discredited decades ago by psychologists, and some states and countries outlawed it. But it still continues in some places. One prominent gay clergyman who experienced it was Mel White, an evangelical pastor who later came out, transferred his clergy credentials to LGBT-affirming Metropolitan Community Churches, and founded Soulforce to end religious oppression of LGBTQI people. In his autobiography “Stranger at the Gate: To Be Gay and Christian in America” he described his early years of being exorcised, electric-shocked and nearly driven to suicide because his church said homosexuality was wrong.

Isaac affirms that LGBT love is compatible with Christian faith. “We are made perfect in GOD's image,” Isaac said. “I hope one day that all religions will erase such judgement and contradiction and finally accept that EVERYONE is of God and has the right to love without consequences, guilt and regulations!”

Fans responded with enthusiastic comments thanking him for “sharing your pain and showing it to reveal to the world we need to love everyone the same.”

Recently Isaac released a shorter and more upbeat “Funk3d Remix” video of “Hiding,” with some of the most frightening scenes omitted.

Isaac’s previous song “Who I Am” has been used in anti-bullying and equality campaigns around the world. He first made a splash on the music scene with such hits as “I Don’t Give a Damn” and “U Want or U Don’t,” both of which enjoyed chart-topping success. His edgy brand of pop music has been called “an emotionally-driven rollercoaster ride.”

Isaac grew up in a Catholic Lebanese family in Sydney, Australia. He experienced a vision of Mother Mary that inspired his music -- and also led him to get more involved in the church, eventually including electroshock therapy.  Finally his own personal connection with God, Jesus and Mary gave him the strength to leave the church group that was damaging his spirit.  Now he is courageously revealing his experiences through his music. 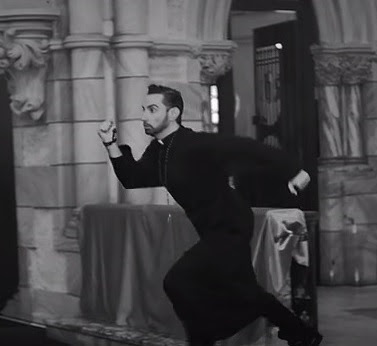 Ray Isaac runs as a priest in his “Hiding” music video
His deep, loving connection with Mary is expressed musically in his song and music video “Mother Mary Song (Ya Oum Allah).” It begins with an Arabic prayer that is similar to the “Hail Mary” prayer.

Isaac discusses his spiritual journey in depth in the following exclusive interview with Kittredge Cherry of the Jesus in Love Blog.


Kittredge Cherry: Why did you choose to release the “Hiding” music video even though PR companies refused to promote it?

Ray Isaac: Because I felt it was very important to tell my story and my struggles. I also know that so many people have suffered far worse circumstances than mine and I needed them to know that I understand and I want to help let the world know! This torment still exists.


KC: You have said that the “Hiding” music video tells your story… of falling in love a man who is hiding that he is gay, of getting electroshock therapy to change your sexual orientation. What role did religion play in your own story?

RI: After Mother Mary appeared to me a few years back I felt the right thing to do was to start going to church and getting more involved in the Catholic religion. But boy was I wrong! The more I went to church and mixed with the devout Catholic groups, the more I started to feel guilt for being myself and living day to day. Such as guilt for swearing or for being gay, going to gay bars, not giving up things for Lent etc. The people in the church were dimming my light and they didn’t even realise.

So instead of growing spirituality so that I could have that closer connection with God, Jesus and Mary, I started to question if I was worthy and loved just the way I was. I then went through depression because of it. I wanted to be straight. I didn’t fit in anywhere. Not with the gays and not at church.

During the low times I heard a voice in my mind and it woke me up out of my sleep and it said “My Son, There’s nothing wrong with you! I made you perfect just the way you are. Get up out of that bed and know that you know the truth about me more than any of these people.”

From that day forward I went on my spiritual journey by myself and now I have found many inclusive churches which are fantastic.


KC: Why do you portray yourself as a priest in the video?

RI: I just wanted to tell two stories: One is of a gay person forced by his family and community to go back in the closet and marry a woman and the other is for the sake of gay clergy. I just chose to be the priest because I have known many priests in that situation and it just felt the right thing to do. My belief is that if religions just accepted all people for who they are then we wouldn’t have such a divide -- within clergy and within the community in general.


KC: Have you considered becoming a priest or minister in real life? With your message of all-inclusive love, you would make a good one.

RI: No, I think I can heal more people by being an artist and being freer without rules. I also don’t fully think the Bible is accurate, so it would just upset me too much. I would prefer to use my songs and lyrics to heal people that way. Thank you so much. I have many amazing priest friends. And they support me (in secret) lol.


KC: Many Jesus in Love readers have struggled to bring together Christian faith and LGBT spirituality. Please tell about your spiritual journey and your current relationship with the church and with God.

RI: I think I answered most of that above, but right now I feel God and my angels, especially Jesus and Mother Mary, are closer than ever. The day Jesus spoke to me and I left the church ironically was the day my relationship was healed and closer again.