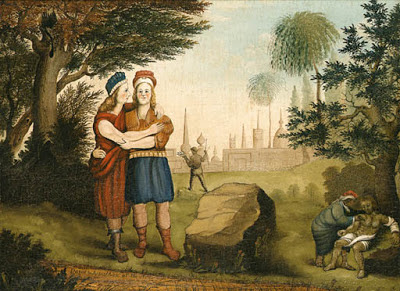 Tantalizing symbols of Biblical same-sex love appear when scholar Mitch Gould analyzes the painting “David and Jonathan at the Stone Ezel” for the Jesus in Love Blog.

It was painted in 1847 by Edward Hicks, Quaker minister and American folk artist famous for painting many versions of the Peaceable Kingdom.

Their moment of embrace...
by Mitchell Santine Gould
Their moment of embrace is arrested in the morning mist, outside of the passage of time. David, nearly at the center of the painting, stands facing the viewer like a crude Attic kouros statue, with a spread stance and a vacant smile on his face. As Jonathan approaches at left, he curls his arm around David's neck, and Jonathan responds with an affectionate pat on the butt. (Or, perhaps, Edward "Peaceable Kingdom" Hicks intended for the identity of these two lovers to be the reverse? We'll never know.)

Jonathan is dressed in a brick-red tunic, carelessly drafted; it might as well be a clunky gown. With his fishbelly-white complexion, rouged cheeks, fragile chinline, and flowing auburn tresses, he looks less like a swarthy, brawny, blood-thirsty Hebraic warrior, and more like the drag queens arrested in England's molly-houses only a few decades prior. David, with the same rouge and consumptive complexion, is wearing a cobalt-blue kilt sort of a thing, a bronze-studded belt, and what appears to be a fringed buckskin jacket suitable for Buffalo Bill. This is the moment in The Book of Samuel in which Jonathan finds David at their appointed meeting place, the stone ezel: "David got up from the south side of the stone Ezel, fell with his face to the ground, and bowed three times. Then he and Jonathan kissed each other and wept with each other, though David wept more."

Unfortunately, Hicks had never learned how to portray human action, much less human emotions, so the figures fail to follow the Mosaic script; indeed, they have no more life than the primitive Greek kouroi. He did not know exactly what an ezel was, either, although to be fair, neither do we today. But he painted it as merely a small boulder, as opposed to a a monument, or a masonry structure large enough to hide David from his enemy, Saul. Some dark and murky trees shelter the beleagured pair from the olive-tinged desert landscape, and the silly, fantastical spires of Saul's palace. The scene is painted with the opalescent atmosphere favored during Morning in America, for example, George Caleb Bingham's Jolly Boatmen. Edward Hicks, the painter of 62 "Peaceable Kingdom" images, was always a naive folk artist, but one gets the feeling that he was not much invested in the concept or execution of David and Jonathan at the Stone Ezel.

And then one notices that this is actually two paintings/stories in one. On the right, there is an even murkier, dimmer vignette, portraying the Good Samaritan from the Book Of Luke, anointing the breast of the injured traveler with oil and wine. Ironically, the victim was on his way to Jericho when he was mugged, considering that Jericho, New York, was the home of Elias Hicks. The skin of both figures is the opposite of the deathly-pale main characters; oddly enough, their flesh takes on the dark, drab colors of acceptable Quaker attire. The short, muscular victim is partially swathed in large cloth bandages, but his torso is exposed very nearly to the crotch. Given the miniature scale of these figures, the ezel is now shown to be a boulder larger than a man. The scene has its own background, a misty olive hillside crowned with trees, with a monochromatic sky, also done in olive. Dreamlike, the Samaritan's olive sky melds into a grassy strip of terrain between Jonathan and David and Saul's castle.

No, sorry, maybe this is three paintings in one. Because in the absolute dead center of the canvas, standing on the olive strip, is another small figure, his back turned to the viewer, rendered entirely in drab brown. He is grasping three arrows, which we know Jonathan used to send a secret message to David: the direction of his arrows revealed to David that Saul intended to kill him. “Then Jonathan gave his weapons to the boy and said, ‘Go, carry them back to town.’”

It's impossible at this late date to authoritatively decode these symbols, but they are tantalyzing. Scriptural figures done up in Quaker drab. Blatantly-gender-bending characters with a love that surpasses that of women. A top-secret meeting on the edge of town. Messages exchanged in indecipherable code, because Dad is ready to kill boyfriend. A muscular stranger getting a friendly oil-rub, after being clobbered by a villain. What does it all mean?

Quaker historians have neglected this rare, solitary outlier (which presumably dates to 1847) from Hicks's usual themes: the lion lying down with the lamb; Noah's ark; Penn's treaty with the Indians; and paintings which documented Quaker lands and livestock. If they ever took notice of it in the first place, they flew blind, with discombobulated gaydar. Hard though it may be for us to believe today, the feminine dress, hair, complexion, rouge, and pose has traditionally been easy enough to dismiss, given the reassuring stereotype that extreme sentimentality pervaded Victorian culture, especially religious culture. But following the rise of gay history in the 1970s, it became clear that earlier generations both encoded and ennobled same-sex love with references to Jonathan and David, Ruth and Naomi, Damon and Pythias, or Zeus and Ganymede. The simplest explanation is that Hicks undertook a commission to depict the love "that surpasses the love of women" for a gay client, almost certainly a Friend, though evidently without much enthusiasm. Let this stand as Exhibit A for the proposition that Brotherly Love had an eroticized variant.
===============

In 1992, Mitchell Santine Gould experienced a mystical experience during the illness and death of his camerado Dan Sumner. Dan's love had inspired him to turn to Walt Whitman's poems, and Mitch soon discovered that scholars were unable to explain why Whitman had such a strong attraction to Quakers, since they were viewed to have a strict, ascetic morality. He has devoted decades of his life to untangling Walt Whitman's Quaker Paradox, and his results are being prepared for for his book Sailor - Lover - Quaker: the Litorral Truth in Walt Whitman's Leaves of Grass. He runs an Airbnb destination called PDXWheelhouse. His writing has appeared in such diverse venues as Popular Science, Men’s Fitness, Quaker History, and Friends Journal, and of course, at LeavesOfGrass.Org.


___
Related links:
David and Jonathan: Love between men in the Bible

“The Love of David and Jonathan: Ideology, Text, Reception” by James E. Harding (2014)

___
This post is part of the Artists series by Kittredge Cherry at the Jesus in Love Blog. The series profiles artists who use lesbian, gay, bisexual, transgender (LGBT) and queer spiritual and religious imagery. It also highlights great queer artists from history, with an emphasis on their spiritual lives.
___