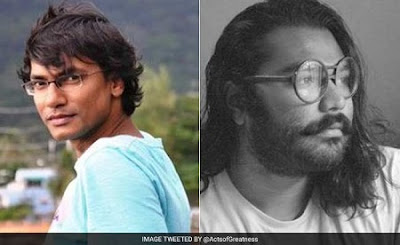 In memory of
Xulhaz Mannan and Tanay Mojumdar

I light a memorial candle for Xulhaz Mannan and Tanay Mojumdar, who were hacked to death for being "pioneers of practicing and promoting homosexuality in Bangladesh" on April 25 in Dhaka, Bangladesh.

The militant Islamist militant group Al-Qaeda claimed responsibility for murder in the south Asian nation, calling it a "blessed attack."

Xulhaz Mannan was editor of "Roopbaan," Bangladesh's first and only LGBT magazine, and also an employee of the U.S. Agency for International Development. Before that he worked for eight years as protocol specialist at the a U.S. Embassy. He tried to organize a Rainbow Rally for LGBT youths on April 14, the Bengali New Year, but was stopped by officials. His friend Tanay Mojumdar was a theater and TV actor who sometimes helped with publishing the magazine.

Roopban was launched in 2014 to promote greater acceptance of LGBT people in Bangladesh.

Mannan had written openly about the frustration of living "in the closet" as a gay man in Bangladesh, where homosexual relations are considered a crime. In a May 2014 blog, he said gays and lesbians in Bangladesh experience "A country where the predominant religions say you are a sinner, the law of the land says you are a criminal, the social norms say you are a pervert, the culture considers you as imported."

Mannon and his friend were killed a gang who got into his apartment by posing as messengers. Witnesses reported that the attackers yelled "Allahu Akbar" ("God is great") as they left.

The misuse of religion to condone murder adds to the tragedy of their deaths. All life, including LGBT lives, must be honored and protected as God intended.
___
Related links:

“Lotus Of Another Color: An Unfolding of the South Asian Gay and Lesbian Experience” by Rakesh Ratti (editor)

Thank you for this post, Kitt. It is so easy to forget that although we have "issues and frustrations" about the homophobia here in the US, there's a big difference between our situation and those areas where hate killings are governmentally sanction at worst or at best ignored.

Oh no, how utterly tragic. Thanks for this vital info, I'll post a reference at gaymystic.