Henri Nouwen: Priest and author who struggled with his homosexuality 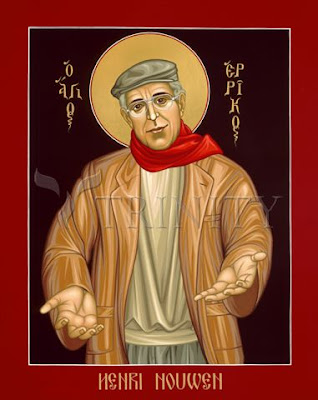 Henri J. M. Nouwen was a Catholic priest and bestselling author who wrestled with his own homosexuality. He died 20 years ago on this date (Sept. 21, 1996).

Nouwen (1932-1996) remains one of the most popular and influential modern spiritual writers. He wrote more than 40 books, including The Wounded Healer

, The Return of the Prodigal Son

, and The Inner Voice of Love

For a new version of this article, click this link to Qspirit.net:
Henri Nouwen: Priest and author who struggled with his homosexuality


Known as a “gay celibate, he probably would have had mixed feelings about being included in this series on LGBT Saints. Nouwen never directly discussed his gay sexual orientation in his published writings, but he confided his conflict over it in private journals and conversations. These are documented in his outstanding and honest 2002 biography Wounded Prophet

by Michael Ford. Despite his loneliness and same-sex attractions, there is no evidence that Nouwen ever broke his vow of celibacy.

His personal struggle with his sexual orientation may have added depth to his writing. “The greatest trap in our life is not success, popularity or power, but self-rejection,” he said.

Although Nouwen is not an officially recognized saint, his “spirituality of the heart” has touched millions of readers. Nouwen’s books have sold more than 2 million copies in over 22 languages. He emphasized relationships and social justice with core values of solitude, community and compassion.

Nouwen was born in Holland on Jan. 24, 1932. He was ordained as a Roman Catholic priest in 1957 and went on to study psychology. He taught at several theological institutes in his homeland and in the United States, including the divinity schools at Harvard and Yale.

In 1985 he began service in Toronto, Canada, as the priest at the L’Arche Daybreak Community, where people with developmental disabilities live with assistants. It became Nouwen’s home until his sudden death in 1996 at age 64. He died from a heart attack while traveling to Russia to do a documentary.

The video below shows Nouwen speaking on "Being the Beloved" at the Crystal Cathedral in California in 1992. One of the  newest books about him is the 2012 biography “Genius Born of Anguish: The Life and Legacy of Henri Nouwen” by Michael Higgins, Nouwen’s official biographer.

The icon of Nouwen at the top of this post was painted by Brother Robert Lentz, a Franciscan friar known for his innovative and LGBT-positive icons. During his lifetime Nouwen commissioned Lentz to make an icon for him that symbolized the act of offering his own sexuality and affection to Christ.

Research and reflection led Lentz to paint “Christ the Bridegroom” (left) for Nouwen in 1983. It shows Christ being embraced by his beloved disciple, based on an icon from medieval Crete. “Henri used it to come to grips with his own homosexuality,” Lentz explained in my book “Art That Dares,” which includes this icon and the story behind it. “I was told he carried it with him everywhere and it was one of the most precious things in his life.”

Lentz’s icon / portrait the top of this post shows Nouwen in an open-handed pose. It calls to mind a prayer written by Nouwen in The Only Necessary Thing: Living a Prayerful Life

Dear God,
I am so afraid to open my clenched fists!
Who will I be when I have nothing left to hold on to?
Who will I be when I stand before you with empty hands?
Please help me to gradually open my hands
and to discover that I am not what I own,
but what you want to give me.

Nouwen gave the gift of his spiritual vision to generations of readers. He encouraged each individual to find their own mission in life with words such as these:

“When the imitation of Christ does not mean to live a life like Christ, but to live your life as authentically as Christ lived his, then there are many ways and forms in which a man can be a Christian.” -- from "The Wounded Healer"

“My hope is that the description of God's love in my life will give you the freedom and the courage to discover . . . God's love in yours.” -- from “Here and Now: Living in the Spirit”

To watch the rest of the sermon, visit the following YouTube page with links to all 8 parts of Nouwen’s sermon on “Being the Beloved”:
http://www.youtube.com/user/belovedson12

A book “The Spiritual Life: Eight Essential Titles by Henri Nouwen” was published in 2016. It includes Intimacy, A Letter of, Consolation, Letters to Marc About Jesus, The Living Reminder, Making All Things New, Our Greatest Gift, Way of the Heart, and Gracias.

“Henri's Wound with a View” by Chris Glaser

Henri Nouwen, on Andrew Sullivan and the “Blessing” of Homosexuality (Queering the Church)

Icons of Henri Nouwen, Christ the Bridegroom and many others are available on cards, plaques, T-shirts, mugs, candles, mugs, and more at TrinityStores.com

Posted by Kittredge Cherry at 8:27 AM

Thanks, Chris! It's an honor to get a comment from an author whose writing about Henri Nouwen is highlighted here.