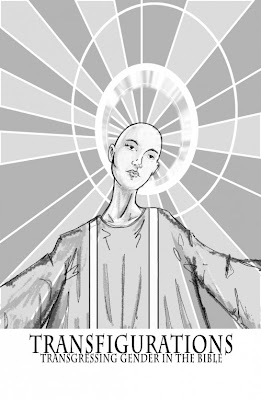 Cover art for “Transfigurations” designed by Mila and Jayna Pavlin (petersontoscano.com)
“Rethinking Sin and Grace for LGBT People Today,” a liberating five-week series by Rev. Dr. Patrick S. Cheng, concludes today with “the Hybrid Christ.”
[Update: A new book based on this series, “From Sin to Amazing Grace: Discovering the Queer Christ


The fifth and final christological model of sin and grace for LGBT people is the Hybrid Christ.  Hybridity is a concept from postcolonial theory that describes the mixture of two things that leads to the creation of a third “hybrid” thing.
For example, the experience of being a racial minority or an immigrant within the United States can be described in hybrid terms.  In the case of Asian Americans, we are neither purely “Asian” (because we live in the United States) nor are we purely “American” (because we are of Asian descent).  Rather, we are a third “hybrid” or “in-between” thing, which ultimately challenges the binary and hierarchical nature of the original two categories of “Asian” (outsider) and “American” (insider).
For me, the Hybrid Christ arises out of the theological understanding that Jesus Christ is simultaneously divine and human in nature.  He is neither purely one nor the other.  In the words of the Athanasian Creed, Jesus Christ is simultaneously both “God and human,” and yet he is “not two, but one Christ.”  As such, he is the ultimate hybrid being.  This hybrid nature is reflected in the double consciousness that is experienced by many racial minorities in the United States such as Asian Americans, African Americans, Latino/as, Native Americans, and others.  In other words, hybridity challenges binary and either/or ways of seeing the world.
Marcella Althaus-Reid, the late bisexual theologian from the University of Edinburgh, has written about the Hybrid Christ in her book Indecent Theology

.  Specifically, this takes the form of the Bi/Christ, in which the bisexual Jesus challenges the “heterosexual patterns of thought” of hierarchical and binary categories.  Just as the bisexual person challenges the heterosexual binaries of “male/female” and “straight/gay,” the Bi/Christ challenges the either/or way of thinking with respect to theology (for example, by deconstructing “poor” and “rich” as mutually exclusive categories in liberation theology).  As such, the Bi/Christ can be understood as an example of the Hybrid Christ.[2]
Thus, a theology of the Hybrid Christ recognizes that Jesus Christ exists simultaneously in both the human and divine worlds.  This can be seen most clearly in the post-resurrection narratives.  As a resurrected person with a human body, Jesus Christ is “in-both” worlds (that is, both human and divine), and yet he is also “in-between” both worlds (that is, neither purely human nor purely divine).  Although this can be a painful experience – metaphorically speaking, Jesus Christ has no place to lay down his head – his hybridity is what ultimately allows him to build a bridge between the human and divine.
Sin as Singularity
If the Hybrid Christ is defined as the One who is simultaneously both human and divine, then sin -- as what opposes the Hybrid Christ -- is singularity, or the failure to recognize the reality of existing in multiple worlds.  For example, sin is failing to recognize the complex reality of multiple identities within a single person, which in turn silences the experiences of those individuals who exist at the intersections of race, gender, sexual orientation, age, and other categories.  As postcolonial theorists have pointed out, this kind of singularity (for example, defining the “gay” community solely in terms of sexual orientation and not taking into account race) results in the creation of a number of “others” who are never fully part of the larger community and thus feel like perpetual outsiders (for example, LGBT people of color).
Eric Wat, a Chinese-American gay man, has written about experiencing the sin of singularity in the form of being rejected by both the straight Asian American community as well as the white LGBT community.  Because of the one-dimensional nature of singularity, Wat’s racial identity as an Asian American is erased within the predominantly white LGBT world, whereas his sexual identity as a gay man is erased within predominantly straight Asian American world.  For Wat, LGBT Asian Americans are “nobody’s children,” and they are “forever left in the middle of the road, unacceptable to those at either side of the street.”[3]
Grace as Hybridity
By contrast, grace in the context of the Hybrid Christ can be understood as hybridity, or existing in the interstitial or “in-beyond” space between two or more intersecting worlds.  In an essay entitled “Disrupted / Disruptive Moments,” Black lesbian theologian Renée Hill has written about how her theological reflection has been shaped by her existence at the “intersections, in-between places, and borderlands” of her identities of race, gender, and sexual orientation.  Hill’s own experience of this hybridity as an “African American lesbian, Christian, theologian, and worker for justice” has convinced her of the need to create new “multireligious and multidialogical” processes for doing theologies and to embrace “questions, disruptions, and moments of ambiguity and uncertainty.”[4]
Like Hill, LGBT Asian Americans have written about the grace of hybridity.  For example, Wat writes that, instead of being caught in the middle of the race / sexuality divide, “gay Asian men must find that third side of the street where we can grow, find our voices, learn about ourselves, and educate others about who we are, so that eventually we can join them at both sides of the street.”[5]  Ann Yuri Uyeda, a queer Asian American activist, wrote about her “overwhelming” experiences in being in a room of nearly 200 queer Asian American women for the first time: “[We were] Asian and Pacific Islander.  And queer.  All at once.  And all together.”[6]
In recent years, there have been a growing number of writings by and about LGBT Asians and Asian Americans of faith.  These include theologians who are members of the Emerging Queer API Religion Scholars (EQARS) group at the Center for Lesbian and Gay Studies in Religion and Ministry at the Pacific School of Religion in Berkeley, California[7] – as well as our allies such as Kwok Pui-lan and Tat-siong Benny Liew.[8]  Indeed, the proliferation of such texts can be attributed to the grace of hybridity.
Conclusion
In this essay, I have argued that LGBT Christians must continue to wrestle deeply with the theological doctrines of sin and grace.  Because LGBT people have been hurt by the traditional legal model of sin and grace, I believe that these doctrines should be rethought in christological terms such as the Erotic Christ, the Out Christ, the Liberator Christ, the Transgressive Christ, and the Hybrid Christ.  It is my hope that a christological model of sin and grace will allow LGBT people of faith to enter into a more meaningful theological dialogue among ourselves as well as with the broader theological community as we enter into the third millennium of the Christian tradition.
[1] Copyright © 2010 by Patrick S. Cheng.  All rights reserved.  The Rev. Dr. Patrick S. Cheng is the Assistant Professor of Historical and Systematic Theology at the Episcopal Divinity School in Cambridge, Massachusetts.  This essay is adapted from his article, “Rethinking Sin and Grace for LGBT People Today,” in the second edition of Sexuality and the Sacred: Sources for Theological Reflection

, edited by Marvin M. Ellison and Kelly Brown Douglas.  For more information about Patrick, please see his website at http://www.patrickcheng.net

, ed. Dwight N. Hopkins (Maryknoll, NY: Orbis Books, 1999), 138, 147-48.
[5] Wat, “Preserving the Paradox,” 80 (emphasis added).
[6] Ann Yuri Uyeda, “All at Once, All Together: One Asian American Lesbian’s Account of the 1989 Asian Pacific Lesbian Network Retreat,” in The Very Inside: An Anthology of Writing by Asian and Pacific Islander Lesbian and Bisexual Women

(Louisville, KY: Westminster John Knox Press, 2005), 100-21; Tat-siong Benny Liew, “Queering Closets and Perverting Desires: Cross-Examining John’s Engendering and Transgendering Word Across Different Worlds,” in They Were All Together in One Place?: Toward Minority Biblical Criticism

, ed. Randall C. Bailey, Tat-siong Benny Liew, and Fernando F. Segovia (Atlanta, GA: Society of Biblical Literature, 2009), 251-88.
Click here to see the whole series “Rethinking Sin and Grace for LGBT People Today.”
Editor’s note from Kittredge Cherry: Two of the images for this post show androgynous Christ figures who blend and transcend gender: the “Transfigurations” cover and “Jesus of the People.” Both have gender hybridity, while “Jesus of the People” also embodies hybrid racial and ethnic identities. The model was an African American woman, and Jesus is shown with an Asian yin-yang symbol and an eagle feather that refers to the Great Spirit in Native American cultures. Artist Janet McKenzie was attacked for blasphemy when Sister Wendy of PBS chose it to represent Christ in the 21st century. I decided to include the photo of the Chinese Jesus Mural because this post addresses Asian American experience in depth.

Posted by Kittredge Cherry at 12:11 PM

This entire series has been an incredible blessing. Patrick Cheng is a profound thinker and I will look forward to re-reading this essay in its entirety. Again, thank you for sharing it, and for all the links and exceptional artwork that accompanies it.