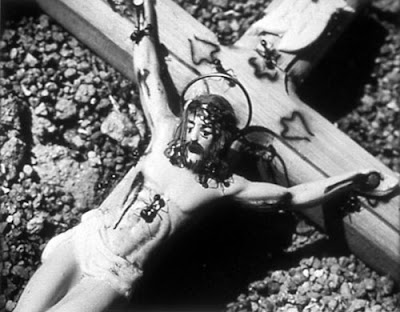 Christ with Ants from the David Wojnarowicz video “A Fire in My Belly”
In an outrageous and unprecedented act of censorship, the Smithsonian Institution recently removed a video by gay artist David Wojnarowicz from exhibition after a few hours of pressure from religious and political conservatives.

Titled “A Fire in My Belly,” the video combines various images of loss, pain and death as a metaphor for the suffering caused by AIDS. The four-minute video was denounced as anti-Christian “hate speech” by the Catholic League because it includes a scene of ants crawling over Jesus on a crucifix. Rep. John Boehner (R-Ohio), the incoming House speaker, called it a misuse of taxpayer dollars.

The video had been on display at the Smithsonian’s National Portrait Gallery in Washington, DC since Oct. 30 as part of the LGBT-themed show “Hide/Seek: Difference and Desire in American Portraiture,” the first national art exhibit about sexual orientation and gender identity in American art. Smithsonian president Wayne Clough decided to pull the video on Nov. 30, claiming that he didn’t want controversy to distract people from the rest of the exhibit.

A Smithsonian spokesperson said that this was the first time that the gallery has pulled an artwork from an exhibit because of complaints from the public. About 100 people protested the removal with a silent march to the Smithsonian on Dec. 2 organized by Washington’s Transformer Gallery.

The censorship of David Wojnarowicz is a hostile act against artists and the whole LGBT community. The attacks on the video seem to be based on homophobia more than religious sensibilities. I doubt that the religious right would have objected to those scenes of ants on the cross if they weren’t part of a major LGBT-affirming art exhibition.

The Smithsonian set a terrible precedent by caving in to pressure from conservatives. The gallery agreed to limit free speech in the name of protecting religious sensibilities. I worry that it signals renewed debate in Congress over federal funding of the arts. Another battle in the culture wars is brewing.

as saying, “Wojnarowicz earned a reputation for public, and for many, an utterly cathartic, portrait of rage.”

National Portrait Gallery director Mark Sullivan issued a statement saying, “I regret that some reports about the exhibit have created an impression that the video is intentionally sacrilegious. In fact, the artist’s intention was to depict the suffering of an AIDS victim. It was not the museum’s intention to offend.”

The video, nicknamed the “Anty Christ” by some jokers, is hard for me to watch, but not because of any blasphemy. It’s not sacrilegious. By putting ants on a crucifix, it fits into the respected Christian tradition of showing Jesus’ persecution and suffering on the cross in grisly detail. Angry critique of religious institutions is also a time-honored Christian tradition established by Jesus himself. For me, the ants on the cross are among the least upsetting images in the video.

Rather like Mel Gibson’s film “The Passion,” the Wojnarowicz video hammers home its point with horrific images of bloody violence. It shows the bloody mouth of a man having his lips sewn together (based on the ACT-UP slogan “Silence=Death”), a bowl of blood, mummified human remains and a man’s genitals.

Born in 1953, Wojnarowicz is recognized as the first American gay artist to respond to the AIDS crisis with angry moral outrage. His video is too gruesome for my taste. However, he makes an important statement about AIDS. Once the gallery decided to put it on display, they should have kept it there.

Wojnarowicz made the video in 1987 as a tribute to his lover Peter Hujar, who died of AIDS that year. The artist often used ants and other insects in his art to symbolize the interactions of human society. Wojnarowicz was an important part of the East Village art scene in New York City before dying of AIDS in 1992 at age 37.

“Hide/Seek: Difference and Desire in American Portraiture” is the largest and most expensive exhibit in the history of the National Portrait Gallery. The exhibit itself was privately funded, but tax money pays for general operations of the Smithsonian Institution, which got $636 million in federal funds in 2010. Located just seven blocks away from the White House, the National Portrait Gallery is a major tourist attraction because it houses famous portraits of presidents and first ladies.

The online version of “Hide/Seek: Difference and Desire in American Portraiture” is well worth a visit. It puts gay, lesbian, bisexual, transgender and queer portraits into historical context with a beautiful, professional presentation. The exhibit begins with 19th-century works by Thomas Eakins and John Singer Sargent. It arcs through the 20th century with such as major artists as Romaine Brooks, Marsden Hartley, Georgia O’Keeffe, David Hockney, Jasper Johns, Andy Warhol, Annie Leibowitz and Keith Haring, with special attention to the contemporary LGBT rights movement.

Insightful essays continue to be written about the Smithsonian’s censorship of gay artist David Wojnarowicz’ video “Fire in the Belly” because of its controversial ant-covered crucifix.

I have come to believe that conservative Christians condemned the Wojnarowicz video precisely because it equates Christ’s torment with queer / LGBT suffering. They do NOT want Christ to be identified with lesbian, gay, bi and trans people at all.

Here are highlights from some of the best new essays on the controversy and its LGBT Christian meanings. Click the titles to see the whole essay:

X-Ray of Civilization: David Wojnarowicz and the Politics of Representation
“What seems to be truly unconscionable for critics of Wojnarowicz’s art is its forceful imputation of the analogy between the Biblical torment of Christ and the contemporary suffering of queer bodies and subjects.”
by Leon Hilton of bullybloggers: the queer bully pulpit

Art, Censorship, and the Scandal of the Cross
“God doesn’t need Christians to act as intellectual property watchdogs.”
by Patrick S Cheng, gay Asian American theologian and author of Radical Love: An Introduction to Queer Theology

Wojnarowicz’s Ant-Covered Jesus: Blasphemy or Religious Art?
“That Christ on the cross is actually dead, and the body so dead that ants might eat it, is both the most orthodox Christian statement, and the most scandalous.”
by S. Brent Plate, religion professor and author of Blasphemy: Art that Offends

Fire in the Belly: The Life and Times of David Wojnarowicz

by Cynthia Carr (2012 biography)
___
This post is part of the Artists series by Kittredge Cherry at the Jesus in Love Blog. The series profiles artists who use lesbian, gay, bisexual, transgender (LGBT) and queer spiritual and religious imagery. It is also part of the GLBT Saints series. Saints, martyrs, mystics, prophets, witnesses, heroes, holy people, deities and religious figures of special interest to lesbian, gay, bisexual and transgender (LGBT) and queer people and our allies are covered on appropriate dates throughout the year.

Special thanks to Jendi, Stephen and Doug for providing news tips and links about the Wojnarowicz/Smithsonian controversy.

I think what depresses me is the really bad quality of the art itself. We go from the exhaulted Eakins and Sargent to the visionary Brooks, and end up with a trashy video from the 80s. I think the curator should have excluded the anty christ because it wasn't very good art, before it even got to the Smithsonian.
Eakins, Sargent and Romaine Brooks are true gay and lesbian heroes!

Like it or not, landmark battles for free speech are often fought over expressions of questionable quality -- Hustler Magazine, flag burning, etc. When we protect the extremes, we ensure freedom for all.

Turtle Woman, I’m also a big fan of Romaine Brooks! I love her “Self Portrait” in the Smithsonian show.

Very well put! I thought the video was an incredible short horror film as well as prophetic critique from within the Christian tradition. Medieval artists weren't afraid of the grotesque, which is why they produced great work while today's official Christian art is mostly kitsch.

Well, I viewed the YouTube version...Frankly, I think it was "icky" rather than artistic. But it certainly wasn't either irreverent or really very pornographic (can I say I've seen much more explicit stuff?) The bottom line, as far as I'm concerned, is, if you don't like it, walk away. No point in making a big fuss about something that somebody else might find meaningful...No accounting for tastes, after all!

Yes, I read that almost all the protestors supporting the video cringed when they watched it before marching to the National Portrait Gallery.

Jendi, who just commented here, wrote a wonderful post putting it in the larger social context: Why Christians Can't Recognize Christian Art . She points out there that:

“Even the more sophisticated venues showcasing self-described ‘Christian art’ would shy away from Wojnarowicz's video because…there's no place in their catalog for art that depicts Christianity as the problem, not the solution. However, that's the kind of art that we as Christians particularly need to see. It can show us where we have wronged someone in the name of our faith, causing them to think of horror and decay, not love and grace, when they see the symbols that we wave around so proudly.”

Thanks for the blog love, Kitt. We got to see the exhibit last week and it really is worth a visit, a groundbreaking show despite the censorship. The Romaine Brooks paintings were my favorite new discovery.

I found it interesting that the works representing the gay male experience were often overtly sexual while the lesbian works were not. Is this a typical divergence among GLBT artists, or were the male curators just less interested in women's sexuality?

I do believe that gay male art tends to focus more on overt sexuality, while lesbian arts put more emphasis on relationships. I'd even venture to say that this difference extends beyond the LGBT community and it may reflect a general difference between male and female perspectives.

Jendi, it's exciting to hear from someone who actually went to the exhibit in person. I am a longtime fan of Romaine Brooks. I discovered her art when I was an undergrad at the University of Iowa and a big exhibit of her work came to the University of Iowa Art Museum. A good book about her milieu is “ Women of the Left Bank "by Shari Benstock.