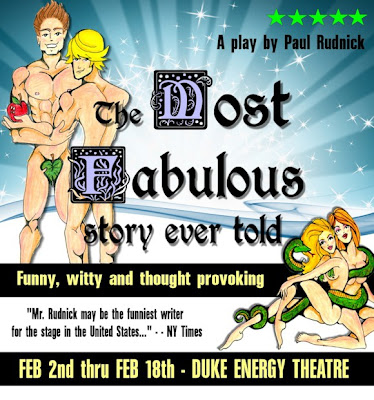 ,” a gleefully queer play based on the Bible. Despite protest letters and prayer vigils, the comedy is running through Feb. 18 in Charlotte, NC.

(Update: Another controversy arose in April 2017 when a Out Front Theatre Company in Atlanta prepared to stage the play.)

“The implication that the Blessed Virgin Mary is a lesbian is gravely offensive to Catholics and to all Christians,” bishop Peter J. Jugis wrote in a Jan. 31 letter asking the Blumenthal Performing Arts Center to cancel the show. Jugis heads Charlotte’s Roman Catholic diocese.

As a lesbian Christian, I must disagree with the bishop. The play uses witty LGBT-oriented humor to express love and the explore human connection to God. I find it appropriate and even inspiring for a play to suggest that the Virgin Mary was a lesbian.

A long-running off-Broadway hit, “The Most Fabulous Story Ever Told” was written by Paul Rudnick in 1998. It puts a flamboyantly gay twist on the creation story with two same-sex couples: Adam and Steve -- and Jane and Mabel! They share adventures together through the centuries, including a hilarious time on Noah’s Ark and slavery in Egypt under an effeminate Pharaoh who won’t let them go because of his crush on Moses.

The second act finds the foursome in contemporary New York City on Christmas Eve at a party thrown by Adam and Steve as Jane and Mabel wait for their child to be born. When Mabel gives birth, it echoes Mary’s virgin birth, leading to the accusations of blasphemy.

About 100 Charlotte Catholics held a peaceful protest in front of the theater on opening night (Feb. 2). The protest is covered in the news video below. Conservatives plan to continue “Holy Hour of Reparation” prayer vigils in homes and chapels during every performance.

Queen City Theatre Company, producer of the play, defended it in a statement quoted in news reports. They say it will “celebrate love, faith, belief, God, and the right to question why we exist and why are on this earth. This production will not be stopped out of fear or pressure.”

Thank you, Queen City Theatre Company! You are making God more accessible to LGBT people of faith and our allies. The protests only prove how important it is to present this vision of the story that is indeed the most fabulous every told.
___

Book: “The Most Fabulous Story Ever Told

Posted by Kittredge Cherry at 9:43 AM

It never ceases to amaze me how, amidst all the major ethical and spiritual issues that concern us in the modern world, the most heat and least light seems to be generated by implications about various humans whom God has called. I think of the Catholics being frantic about supposed slurs against the "purity" of Jesus' mother Mary, and the frothing-at-the mouth fury Muslims when Mohammed is depicted in a cartoon with a bomb wrapped in his turban!

You're right that this is one of many examples of the "religious right" going ballistic over alternative visions of a religious leader. But I'm surprised that I never heard of this play until now! Sometimes these reports on censorship campaigns get rather grim, so I like this post because the play itself seems upbeat and light-hearted.

And the odd part is that the Virgin Mary is not once portrayed as a lesbian in this play. Not once. But heaven forbid anyone actually READ something before getting all up in arms over a slur.

I debated whether to write about this play for that very reason -- it’s not literally about a lesbian Virgin Mary. But the implication is enough to rile up conservative Christians. In my opinion the same applies to “Corpus Christi,” which is controversial because it IMPLIES a gay Jesus by having a parallel contemporary story.