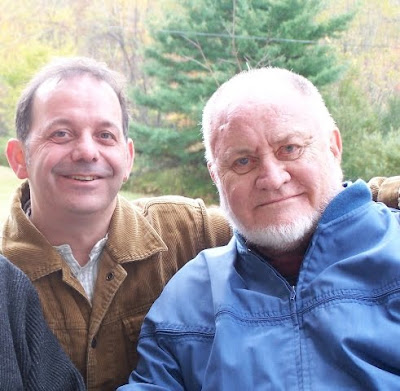 John McNeill, right, with Brendan Fay, director of "Taking a Chance on God"
A new film about a gay priest was the top LGBT spiritual arts story for 2011, the Jesus in Love Blog announced today.

The blog’s most popular post of the year was a report on the premiere of “Taking a Chance on God.” a documentary about John McNeill. The 86-year-old Roman Catholic priest was silenced by the church for coming out as gay and promoting LBGT rights starting in the 1970s.

The top 10 LGBT spiritual arts stories of the year were named today by lesbian Christian author Kittredge Cherry. She founded Jesus In Love to promote LGBT spirituality and the arts with a blog and e-newsletter.

The year’s second-ranked story covered attacks by Christian conservatives against the exhibit “Our Lady and Queer Santas (Saints)” by lesbian artist Alma Lopez.

Here is a list of the year’s top stories.  Click the headlines for links to the original posts at the Jesus in Love Blog. LGBT saints are in a class by themselves, so the final three spots are reserved for the most popular saints of 2011.

1. Gay priest McNeill’s premiere moves crowds despite rain in Rome at EuroPride
Rain couldn’t dampen the spirit of the crowd that joined pioneering gay priest John McNeill at the world premiere of a film on his life at EuroPride in Rome June 6. The debut of “Taking a Chance on God” got by far the most page views and Facebook shares in 2011 at the blog. Related articles were also popular, especially Gay priest McNeill shakes up Rome with new moves and new movie.

2) Our Lady and Queer Saints art attacked as blasphemy - Show support now!
Conservative Catholics attacked “Our Lady and Other Queer Santas (Saints),” an art show and speech by Latina lesbian artist Alma Lopez at University College Cork in Ireland in June 2011. They launched a censorship campaign that compromised the university’s email system and picketed the event. This post sparked action! Not only did hundreds of people view it, but at least 6 readers sent letters of support to the university.

shows that she is more than just a queer cultural icon. “She is also a queer spiritual evangelist who refuses to shy away from controversial religious topics,” writes theologian Patrick S. Cheng in this reflection.

7. Artist Wes Hempel paints gay spiritual struggles
Gay spiritual struggles are suggested in the paintings of Wes Hempel, whose art helps LGBT people find our missing place in history. The Colorado artist creates a sense of mystery by combining contemporary figures with historical elements, using the polished, realistic style of the past.

9. Joan of Arc: Cross-dressing warrior-saint
Joan of Arc was a cross-dressing teenage warrior who led the medieval French army to victory when she was 17. She died for her God-given right to wear men’s clothing, the crime for which she was executed 580 years ago.

10. Artemisia Gentileschi paints strong Biblical women
Baroque artist Artemisia Gentileschi is included in the LGBT saints because she inspired so many with her paintings of strong Biblical women and her success despite gender barriers and sexual violence. She can be considered the patron saint of lesbian artists, women artists, and everyone who breaks gender rules.
Founded in 2005, Jesus In Love promotes lesbian, gay, bisexual, transgender and queer spirituality and the arts. It supports artistic and religious freedom and teaches love for all people, regardless of sexual orientation, gender identity or religious faith.
Posted by Kittredge Cherry at 9:28 AM