For a new version of this article, click this link to Qspirit.net:
Saint Valentine: Marriage equality role model 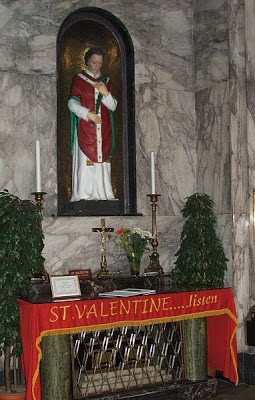 Shrine of St. Valentine in Whitefriar Street Carmelite Church in Dublin, Ireland (Photo by Blackfish, Wikimedia Commons)
Marriage equality has a surprising role model in Saint Valentine, a 3rd-century Roman priest who defied the restrictive marriage laws of his era to bless couples who were forbidden to marry. His feast day is, of course, today -- Valentine’s Day (Feb. 14).

Saint Valentine was not gay, but he put love above the law to perform outlaw marriages in his day. He can be an inspiration for the current movement to legalize same-sex marriage.

The Roman Emperor Claudius II thought that he would get more and better soldiers if men were not allowed to marry, so he issued a decree outlawing marriage. Saint Valentine continued to perform weddings in secret until he was arrested and executed for defying the ban on such marriages. Legend has it that he fell in love with a woman who visited him in prison, sending her a letter that ended “From your Valentine” -- the original prototype for today’s Valentine greeting cards.

Saint Valentine also did weddings for Christian couples at a time when the church was persecuted. Now the tables are turned and conservative Christians are sometimes persecuting LGBT people. They are among the most visible opponents of marriage equality.

But brave clergy are following in the footsteps of St. Valentine. They pioneered the blessing of same-sex relationships long before it was on the secular political agenda and continue to face punishment for defying marriage laws. For example, Troy Perry performed what may be the first modern same-sex wedding in 1969, a year after he founded the LGBT-affirming Metropolitan Community Churches. In a more recent case, lesbian minister Rev. Jane Spahr was censured in 2012 by the Presbyterian Church for marrying 16 same-sex couples during the brief period when such marriages were legal in California.

While Saint Valentine is not known to have performed same-sex weddings, church history does provide powerful examples of same-sex couples to inspire today’s lovers -- whether or not we have the right to marry. Links to some of them are listed below. Happy Valentine’s Day!

Boris and George: United in love and death 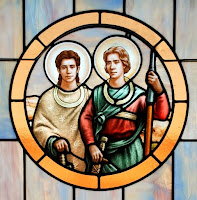 Symeon and John: The holy fool and the hermit who loved each other 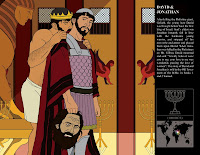 Hildegard of Bingen and Richardis: Mystic who loved women


Perpetua and Felicity: Friends to the end

Polyeuct and Nearchus: Brothers by affection

Ruth and Naomi: Love between women in the Bible

Posted by Kittredge Cherry at 12:48 AM

I've always been sceptical of Valentine's day as nothing more than a commercial bun-fight - but I was not aware of the connection with performing marriages not officially approved of. The comparison with the courageous clergy who are doing the same thing today, in defiance of denominational rules, is obvious.

In spite of my scepticism around the popular celebration, I have reposed a somewhat expanded edition of my earlier piece on same - sex lovers in Church history.( http://queeringthechurch.com/2012/02/14/same-sex-lovers-in-church-history/ )

I shall now add a link to your post.

I am happy to say that in the 1940s, our priest gave the full wedding rite to inter-racial couples and also at least three same gender couples. - Yes, during World War II.

Terry, it’s inspiring to read your piece describing so many same-sex couples in church history. I look forward to following the links to learn more about those who are less familiar to me. I added a link here too.

James, I wish that you had left more details so we could know and honor the brave priest who defied unjust limits on marriage during World War II. I suspect that there are other unsung heroes who blessed same-sex lovers throughout all history. Happy Valentine’s Day!