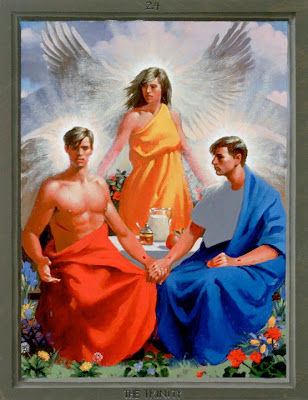 24. The Trinity (from The Passion of Christ: A Gay Vision) by Douglas Blanchard
“The grace of the Sovereign Jesus Christ and the love of God and the communion of the Holy Spirit be with you all.” -- 2 Corinthians 13:14 (Inclusive Language Lectionary)

An angelic figure blesses two men holding hands in “The Trinity,” the last image of 24 paintings in “The Passion of Christ: A Gay Vision” by Douglas Blanchard. The painting can stand alone to affirm the holiness of gay couples, but it also serves as a meditation on the Christian Trinity: one God in three persons. Churches celebrate the Trinity on Trinity Sunday, which is today (June 3) this year. The trio gathers around a table set with milk, honey, and fruit, references to the Promised Land. The man draped in red reaches toward the viewer, inviting us to join them in the sunny garden. An arch in the background hints at the gate of heaven.


For a new version of this article, click this link to Qspirit.net:
Trinity Sunday: Holy Spirit blesses same-sex couple as Gay Passion of Christ series ends

“The Trinity” shows the transformation in Jesus (and the viewer) after experiencing Christ’s Passion. We move from the dark prison of the first painting to a bright land of promise, out of the closet, into the streets, and on to holy bliss. The artist has said that he intended this to be “a little glimpse of salvation, of the reward of the faithful.”

The winged woman in the golden robe is the same Holy Spirit who arrived in the previous painting. Viewers will be forgiven for wondering which man is Jesus. Blanchard, who is so adept at painting individual faces, gives the same face to all three, even the female Holy Spirit. The artist does this on purpose to emphasize the three-in-one nature of God. BOTH men have haloes and marks of crucifixion on their wrists.

One clue to their identities comes from the way the figures direct their attention. Both the Holy Spirit and the man in blue turn to look at the man in red. Their body language suggests that he is Jesus, the focus of this series, the one who just completed his heroic Passion journey. Like Jesus in the first painting of this series, the man in red gazes straight out from the image, meeting the eyes of the viewer His upper torso is naked, revealing the wound in his side and a radiant, muscular body. Surely this man is Jesus.

The Bible often says that Jesus will ascend to heaven and sit at the right hand of God. By that reckoning, the man in blue must be God, but he is not the usual Father figure of traditional Trinitarian imagery. He doesn’t look like “the Lord” and certainly not like Jesus’ father. In Blanchard’s universe, God’s identification with humanity is so complete that he and Jesus both share the crucifixion wounds. God and Jesus are identical young lovers in a mystic same-sex marriage. Mission accomplished, they sit together side by side in radical equality. As the historical Christian creeds say, they are “of one substance” and “coeternal, and coequal.”

They wear colors that reinforce the Trinity concept. Their red, blue and yellow robes are the three primary colors that, when mixed, create the full spectrum of white light. Red, blue and yellow flowers blossom around them. These are common, garden-variety plants: geraniums, irises -- and dandelions! Even weeds are welcome at the feet of Christ. The natural setting and generic robes give it a timeless quality, but there are hints of contemporary life in the glass pitcher and honey jar. The man on the right wears a modern t-shirt under his blue robe.

The holy gay wedding imagery is especially revolutionary because of its placement in the Blanchard’s Passion sequence. After the Ascension and Pentecost, the final position normally goes to the Last Judgment. Traditional images show Jesus sending sinners to hell and the righteous to heaven. Conservative Christians like to imagine homosexuals among the damned. But Blanchard eschews the crime-based model. He found a model for this painting in a separate branch of art history: Andrei Rublev’s great Byzantine icon “Trinity,” which shows the three angels at Abraham’s table. Blanchard’s Passion ends not with judgment, but with love. Jesus and God are not on thrones and they are not judging anybody. This too has a Biblical foundation. Roman 8:34 says, “Who then will condemn us? No one -- for Christ Jesus died for us and was raised to life for us, and he is sitting in the place of honor at God’s right hand, pleading for us” (New Living Translation).

The symbolism of this painting can be better understood by considering it as a pair with the first painting, Son of Man. The opening image is also a kind of Trinity. The two paintings that start and end the series have much in common. Unlike the rest of the series, their titles are theological concepts. Both have a disjointed sense of time, mixing modern and ancient dress. Both show Jesus gazing directly into the eyes of the viewer. The first and last images are brackets or bookends that enclose and uphold the thrilling account of events in Christ’s life.

The term “Trinity” is never used in the Bible, although it is implied. The Trinity is admittedly a mystery, which naturally makes it rather queer. The Trinity has inspired queer theologians to reflect on the omnigendered or genderqueer nature of God, encompassing both male and female as in Blanchard’s paintings. 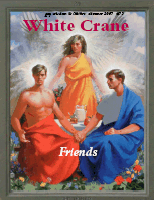 Understanding of Christian symbolism is not necessary to enjoy this painting. Any group of three can be a trinity. A lot of LGBT people (and others) just plain like “The Trinity,” without seeing it as Christian at all. For example, it was chosen to illustrate the concept of gay friendship on the cover of White Crane Journal: Gay Wisdom and Culture in summer 2007. The painting ends the series as a kind of blessing or benediction, encouraging viewers to carry the vision onward and live with passion in every sense of the word.

“So then the Sovereign Jesus, after speaking to them, was taken up into heaven, and sat down at the right hand of God.” -- Mark 16:19 (Inclusive Language Lectionary)
What is the gay vision of heaven? The Holy Spirit inspires each person to see visions of God in his or her own way. Look, the Holy Spirit celebrates two men who love each other! She looks like an angel as She protects the male couple. Are the men Jesus and God? No names can fully express the omnigendered Trinity of Love, Lover, and Beloved… or Mind, Body, and Spirit. God is madly in love with everybody. God promised to lead people out of injustice and into a good land flowing with milk and honey. We can travel the same journey that Christ traveled. Opening to the joy and pain of the world, we can experience all of creation as our body -- the body of Christ. As queer as it sounds, we can create our own land of milk and honey. As Jesus often said, heaven is among us and within us. Now that we have seen a gay vision of Christ’s Passion, we are free to move forward with love.
Jesus, thank you for giving me a new vision!
___
Related links:

Celebrate the Feast of the (Queer) Holy Trinity (Queering the Church)

, copyright © 1985-88 National Council of the Churches of Christ in the United States of America.
Posted by Kittredge Cherry at 8:45 AM

Thanks for another great text.

You're most welcome, Doug. It's a privilege to work with these great paintings.