Hildegard of Bingen: Woman-loving nun gets new honor from Pope 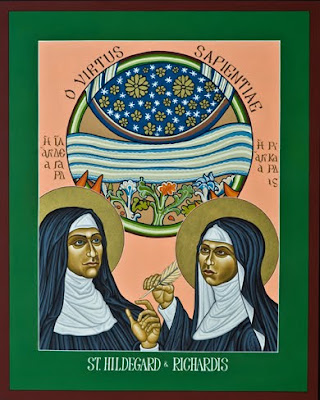 Hildegard of Bingen was a medieval German nun, mystic, poet, artist, composer, healer and scientist. She founded several monasteries, fought for women in the church and wrote with passion about the Virgin Mary. Some say she was a lesbian because of her strong emotional attachment to women, especially her personal assistant Richardis von Stade. Hildegard was declared a doctor of the church by Pope Benedict XVI in 2013. Her feast day is Sept. 17 (today).

For a new version of this article, click this link to Qspirit.net:
Hildegard of Bingen and Richardis: Medieval mystic and the woman she loved


The title “Doctor of the Church” is a rare honor, bestowed upon only a few saints whose writings have universal value to the church. Their “eminent learning” and “great sanctity” must be affirmed by the Pope. Currently the Roman Catholic Church has only 33 doctors, including three women.

The friendship -- or love story -- between Hildegard and Richardis is included in a 2009 film from German feminist director Margarethe von Trotta called Vision: From the Life of Hildegard von Bingen

. Von Trotta is one of the world’s most important feminist filmmakers and a leader of independent German cinema. Von Trotta allows Hildegard to speak for herself by using a script based on Hildegard’s own writings and a soundtrack filled with Hildegard’s music. Watch a trailer at the end of this post. 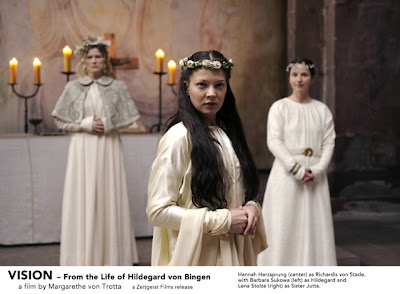 Hildegard of Bingen (1098-1179), the tenth child of a noble family, was offered to the church as a “tithe” when she was very young. She was raised from the age of 8 in the hermitage that later became her Benedictine abbey. She founded two other convents where women performed her music and developed their artistic, intellectual and spiritual gifts. She spent almost all of her life in the company of women. 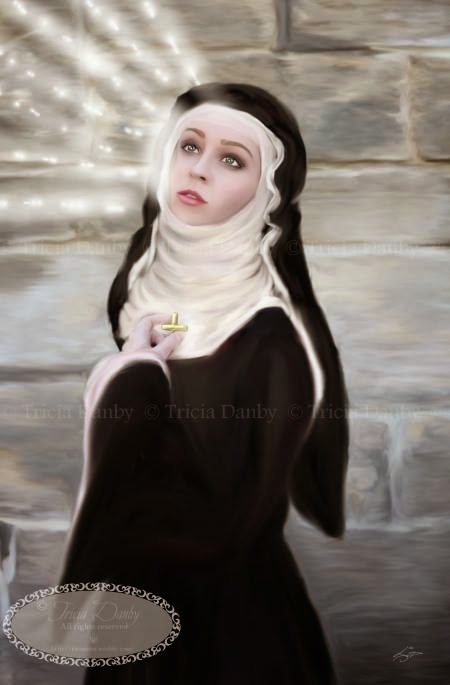 “Hildegard: The Vision” by Tricia Danby
She had visions throughout her life, starting at age 3 when she says that she first saw “the Shade of the Living Light.” She hesitated to tell others about her visions, sharing them only with her teacher Jutta.

When she was 42, Hildegard had a vision in which God instructed her to record her spiritual experiences. Still hesitant, she became physically ill before she was persuaded to begin her first visionary work, the Scivias (Know the Ways of God). 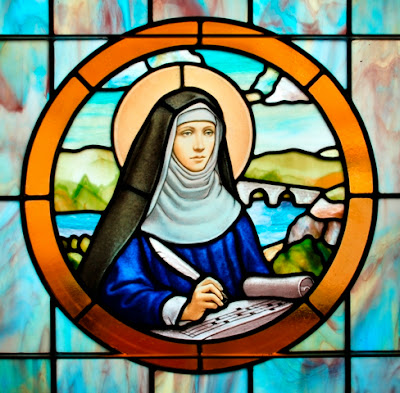 "St. Hildegard of Bingen" by Plamen Petrov
Hildegard was nursed in her illness and encouraged in her writing by Richardis von Stade, a younger woman who was her personal assistant, soul mate and special favorite. Whether or not they were physically intimate, Hildegard’s actions suggest that she was a lesbian in the sense that her primary love interest was in women.

In 1151, Hildegard completed the Scivias and trouble arose between her and her beloved Richardis. An archbishop, the brother of Richardis, arranged for his sister to become abbess of a distant convent. Hildegard urged Richardis to stay, and even asked the Pope to stop the move. But Richardis left anyway, over Hildegard’s objections.

Hildegard wrote intense letters begging Richardis to return: “I loved the nobility of your conduct, your wisdom and your chastity, your soul and the whole of your life, so much that many said: What are you doing?”

Richardis died suddenly in October 1151, when she was only about 28 years old. On her deathbed, she tearfully expressed her longing for Hildegard and her intention to return.

Hildegard’s grief apparently fueled further artistic creation. Many believe that Richardis was the inspiration for Ordo Virtutum (“Play of Virtues”}, a musical morality play about a soul who is tempted away by the devil and then repents. According to Wikipedia, “It is the earliest morality play by more than a century, and the only Medieval musical drama to survive with an attribution for both the text and the music.”

In an era when few women wrote, Hildegard went on to create two more major visionary works, a collection of songs, and several scientific treatises. She was especially interested in women’s health. Her medical writings even include what may be the first description of a female orgasm. 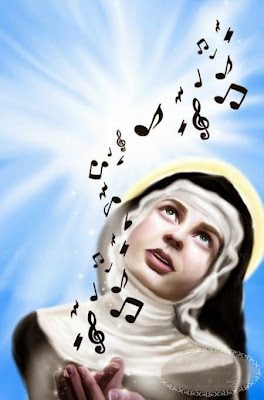 In the Symphonia, a collection of liturgical songs to Mary, Hildegard writes with ecstatic passion of her love and devotion to the Virgin Mary. She extols Mary as “greenest twig” and sings the praises of her womb, which “illuminated all creatures.”

Her songs to Mary are available for listening in the following video and on the Sequentia recording, “Hildegard von Bingen: Canticles of Ecstasy

.” Her music is still just as beautiful today.

Hildegard died on Sept. 17, 1179 at age 81. The sisters at her convent said they saw two streams of colorful lights cross in the sky above her room. She became a saint by popular acclamation.

The icon of Hildegard and Richardis at the top of this post was painted by Colorado artist Lewis Williams of the Secular Franciscan Order (SFO). He studied with master iconographer Robert Lentz and has made social justice a theme of his icons. This post also features images of Hildegard by artists Tricia Danby and Plamen Petrov.

Hildegard appears as a young woman in new portraits by Tricia Danby, a spiritual artist based in Germany and a cleric in the Old Catholic Apostolic Church. Her images reveal a sensuous side to Hildegard’s rapturous connection with God. 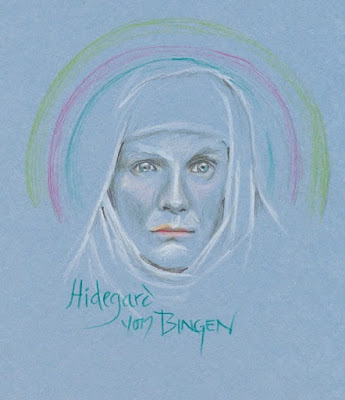 “Hildegard von Bingen” by Tobias Haller
Hildegard was sketched in blue with intense blue eyes by Tobias Haller, an iconographer, author, composer, and vicar of Saint James Episcopal Church in the Bronx. He is the author of “Reasonable and Holy: Engaging Same-Sexuality.” Haller enjoys expanding the diversity of icons available by creating icons of LGBTQ people and other progressive holy figures as well as traditional saints. He and his spouse were united in a church wedding more than 30 years ago and a civil ceremony after same-sex marriage became legal in New York. 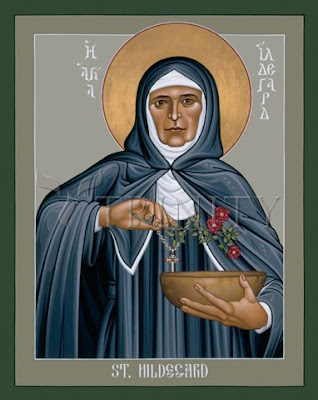 “Saint Hildegard of Bingen” by Robert Lentz
Robert Lentz, a Franciscan friar known for his innovative and LGBT-positive icons, portrays Hildegard with a wild rose. She used to dip a rose in the Rhine River and use it to sprinkle water on people as a blessing when she traveled between monasteries. Lentz is stationed at Holy Name College in Silver Spring, Maryland.

LGBT-affirming creation theologian Matthew Fox has written two books on the life and work of Hildegard. The newest is Hildegard of Bingen: A Saint for Our Times: Unleashing Her Power in the 21st Century, which presents her as an "eco-warrior" who meets such luminaries as Albert Einstein, Howard Thurman, Dorothee Soelle and Clarissa Pinkola Estes. Fox also wrote Illuminations of Hildegard of Bingen

Hildegard was the subject of a major sermon by Episcopal Presiding Bishop Katharine Jefferts Schori when the House of Bishops met in Taiwan on Sept. 17, 2014. “Hildegard speaks scientifically and theologically of divine creativity as viriditas, reflecting both greenness and truth… Hildegard’s vision motivates all healers of creation who understand the green web of connection that ties creation together in Wisdom’s body,” she said. (Thanks to Ann Fontaine at Episcopal Café for the news tip.)

The Hildegard icons are available on cards, plaques, T-shirts, mugs, candles, mugs, and more at TrinityStores.com

Posted by Kittredge Cherry at 11:59 AM