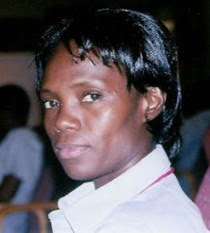 FannyAnn Eddy was a major activist for LGBT rights in her native Sierra Leone and the rest of Africa. She was murdered 10 years ago today on Sept. 29, 2004. Nobody was ever convicted of the crime.

She founded the Sierra Leone Lesbian and Gay Association in 2002 and advocated for LGBT rights at the United Nations. Her organization documented harassment, beatings and arbitrary arrests of LGBT people in her country.

In her testimony at the U.N Commission on Human Rights in April 2004, she affirmed that there are LGBT throughout Africa, but they live in fear.

With tragically prophetic words, she told the U.N, “We live in fear within our communities, where we face constant harassment and violence from neighbors and others. Their homophobic attacks go unpunished by authorities, further encouraging their discriminatory and violent treatment of lesbian, gay, bisexual and transgender people.”

Eddy was working alone at night in the Freetown offices of the Sierra Leone Lesbian and Gay Association when one or more attackers broke in and killed her. She was survived by her 10-year-old son and her girlfriend, Esther Chikalipa.

Eddy’s final words to the United Nations still resound today: “Silence creates vulnerability. You, members of the Commission on Human Rights, can break the silence. You can acknowledge that we exist, throughout Africa and on every continent, and that human rights violations based on sexual orientation or gender identity are committed every day. You can help us combat those violations and achieve our full rights and freedoms, in every society, including my beloved Sierra Leone.”

This post is part of the GLBT Saints series by Kittredge Cherry at the Jesus in Love Blog. Saints, martyrs, mystics, prophets, witnesses, heroes, holy people, deities and religious figures of special interest to lesbian, gay, bisexual and transgender (LGBT) and queer people and our allies are covered on appropriate dates throughout the year.

Posted by Kittredge Cherry at 12:28 AM

Thanks, Kitt. There are far, far too many of these modern martyrs. Those in Western countries tend to hit the headlines - it's good to see someone from Africa also rememberedoTitl

In connection with this, I wanted to call attention to the PBS special, "Half the Sky", being broadcast this coming Monday and Tuesday evenings, October 1 and 2. Although it deals with the broader issue of the oppression of women, all of us know how closely this issue and GLBT oppression are connected.

Actually I decided to do a profile of FannyAnn when I looked at her photo. It was like she was looking right at me, saying that she wanted to be heard!

An added benefit is that as a black lesbian from Africa, her story balances those of white men from Western countries… and African gay male martyr David Kato.

Thanks, Trudie, for alerting us to “Half the Sky.” I hope it is on our local PBS station.